The Evolution of the Enterprise-E Bridge

by Tadeo D'Oria and Bernd Schneider

The bridge of the Enterprise-E appeared in the three movies "Star Trek: First Contact", "Star Trek: Insurrection" and "Star Trek Nemesis". It was slightly modified for each of the two latter appearances. Our article tracks the changes to this set, including the introduction of seatbelts at the end of "Nemesis" that were cut from the movie.

The black stripes were removed from all consoles. After their removal, we can see that the surface of the consoles includes engravings that were accentuated by the black paint.

Also the labels on consoles were switched from dark lettering on bright ground to the inverse combination.

The small consoles used by the XO and counselor were removed.

The dedication plaque location changed from one of the turbolift alcoves (port) to the other (starboard). It's not identifiable in the movie, but purportedly the plaque itself was changed as well to a new version.

Silver metallic lines were added between the padded wall segments in the forward area of the bridge.

Four vertical stripes of shiny tape were added to all doors exiting the bridge. They are congruent with the already existing slight engravings in the doors.

The keypads for both observation lounge doors were removed. 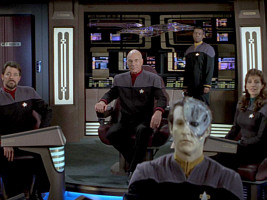 The keypads located on the columns between the wall consoles were likewise removed.

Lighting during red alert changes. All regular lights stay on, and red alert is simply indicated by flashing the red lights.

The arguably best-known change to the Enterprise-E bridge is the steering column with the joystick that pops up in the center of the bridge during the battle with the Son'a ships in "Insurrection". This is not a permanent change, however, as the column is normally invisible (and could have been there already in "First Contact"). Yet, this may be one reason for the removal of the XO/counselor consoles, although the new console is still well in front of their former locations.

The XO/counselor consoles were returned, with convenient handles. 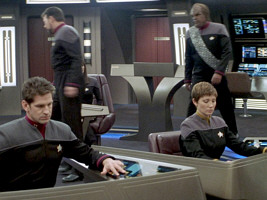 The wall facing consoles had handles added below the keyboard area.

The LCARS screens were changed to a new, mostly blue color combination.

The standing consoles next to the XO/counselor chairs were given a big screen in the middle, changing the shape of the console

The shiny vertical stripes on the doors were removed.

The keypads next to the observation lounge doors were brought back.

The keypads between the wall consoles were restored as well.

The small carpeted circles under the work station chairs were removed.

Lighting during red alert changes once again, going back to the "First Contact" style, except for the overhead lights turning red.

Photos of the set from the time of "First Contact" and from "Nemesis" reveal two more changes. It is not certain when they actually happened.

A circular support was added to the ceiling, separating the lit areas in an inner and an outer one. 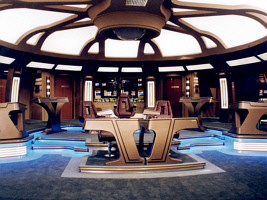 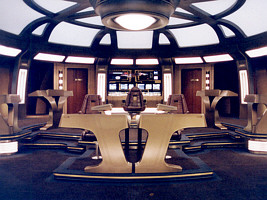 Also, the carpets were renewed, not only with a darker color combination, but also with a slightly different pattern. The lighter carpet stripe that accentuates the contours of the consoles is thinner around the helm/ops consoles.

A deleted final scene from "Nemesis" would have shown that while the Enterprise was in drydock, it received a new captain's chair, outfitted with seatbelts. "It's the Mark VII, captain. State-of-the-art ergonomics, command interface..." - "Well, let's give it a try... Feels good." - "Try that button, sir." Picard pushes the button, and the seatbelts unfold. He smiles. "About time." 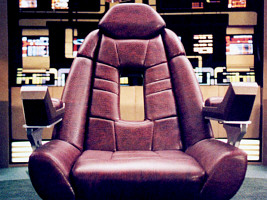 The Valdore bridge is visible for a few brief moments in "Star Trek Nemesis". It was created by modifying the Enterprise-E bridge set. The chairs are taken from USS Voyager. 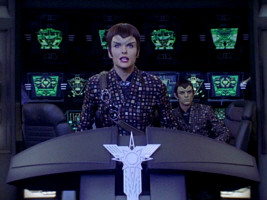 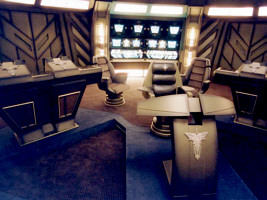 Most screen caps from TrekCore.