Here is our update to the Observations in TNG: "The Offspring", with new findings and over 40 new images.

Read my review of DIS: "Rubicon". The cat-and-mouse game initially makes up for some of the mistakes of "All In" but then regresses to typical Discovery storytelling: unwarranted worship of you-know-who, unprofessional disputes, mistakes for which nobody assumes responsibility, little progress regarding the mystery at hand.

I have fixed several small errors such as spellings and references in the database of substances and particles and added many screen caps. Furthermore, all screen caps in the article on Variations of the TNG Desktop Monitor are HD now (where available). 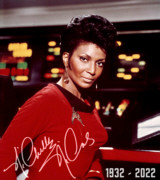 Continuing the DIS season 4 reviews with "All In". The episode squanders the momentum gained in "...But to Connect", to turn the struggle for the future of the galaxy literally into a gamble.

It's been a while, but I will continue to revise and extend my reviews of Voyager episodes because I sometimes need a break from new Trek. Today: "Infinite Regress" and "Nothing Human". New DIS reviews will follow shortly, and I'm working on SNW as well.

Yet another updated and expanded article: Observations in TNG: "Yesterday's Enterprise". Check out Jörg's Twitter account, where he is posting still more new observations.

The next Discovery season 4 review: DIS: "...But to Connect". It looks like this episode was generally well received. But it had too many buzzwords, too much emotionality and too little professionalism of the characters for a great episode in my view.

The article about Picard's Shakespeare Books now includes references from PIC: "The Star Gazer", where we can see all of the various books from TNG in some fashion. Also, see how the runabout aft compartment was turned into USS Prometheus interiors for DS9: "Second Sight".

Continuing my Discovery season 4 reviews with DIS: "Stormy Weather". The story does not move along and becomes obnoxious when seemingly everyone's and everything's feelings get offended.

Also, there are new facts from PIC and SNW and many new pictures in the article on 21st Century Earth History.

And here is the updated and extended article with Observations in TNG: "A Matter of Perspective".

Another one of Jörg's old articles has been significantly extended: Observations in TNG: "Déjà Q".

The articles on The Continuities of Star Trek, The Visual Continuity of Star Trek and Discoverse Continuity Problems are up to date now with examples from Strange New Worlds. Also watch out for more SNW-related updates in other articles.

I continue my reviews of Discovery's season 4 with DIS: "The Examples". This episode comes with classic Trek vibes as they are rare in the series and is arguably the best one of the season.

The Rebirth is the first story of Travis Anderson's SID Rebirth. The SID team awakens in a new reality, in which everything is familiar yet not quite the same.

Here is my review of DIS: "All Is Possible". This episode consists of two plot threads, and the good one about the diplomatic negotiations cannot make up for the many weaknesses of the shuttle crash scenario.

Travis Anderson launches a new series of stories named SID Rebirth, which begins with the transition to another universe. Read the message from the author and see the updated personnel and vessel profiles. The first story will be posted shortly.

Many small updates today, such as the addition of facts from PIC season 2 to the timeline. Also, there are some new side views in the starship database and diagrams in the starship gallery, such as of Discovery Federation ships and Delta Quadrant ships.

Finally, there is a brief assessment of Strange New Worlds after watching the first five episodes.

Added the new designs from season 4 to the database of Discovery Future Alien Ship Classes.

Continuing my reviews of Discovery's season 4 with DIS: "Choose to Live". In spite of a bumpy start and some odd character choices, an almost self-contained classic sci-fi story unfolds that increasingly pleases me.

This was quite an effort! Here is the exhaustive write-up about Time Travel in Star Trek: Picard, specifically about the story arc that spans the whole second season of the series. Comments are appreciated!

New pictures in the galleries of Star Trek Discovery Characters and Star Trek Picard Characters, now up to date with selected publicity shots from the latest seasons.

The Federation starships from Discovery season 4 are in the starship database now.

And here is my review of DIS: "Anomaly". Right after a promising start of season 4, this episode is disappointing. There is a lot of action and a lot of talking, but somehow nothing of note happens.

Besides adding facts from PIC season 2 to many articles, I will catch up on Discovery. Here is my review of the season 4 premiere, "Kobayashi Maru".

I have compiled another list: All Star Trek Series Opening Credits Ranked, ordered by how much I like them and how well I think they represent the series.

I wouldn't have expected it, but the finale PIC: "Farewell" effectively saves the season with its emotional impact, although the time travel and the numerous coincidences still don't make much sense.

As the premiere of Strange New Worlds is only two days away, international fans are locked out - as usual. But even though I may be able to watch the show "unofficially", I don't intend to join the rat race. There will be no reviews of SNW at EAS any time soon. I will wait until I have an opinion whether the series lives up the hype about it. In the meantime, feel free to submit guest reviews. The SNW season 1 comments are open too.

After posting the review of the Picard 2 season finale "Farewell", I will catch up on Discovery.

It's time to update the next one of Jörg's old articles, this time Observations in TNG: "The High Ground", including over 40 new images.

Here is my review of PIC: "Hide and Seek". This season captivates me less with every week that I watch. And unless a miracle happens in the finale, it will not make sense either.

I have added lots of new stuff to the old article about Observations in TNG: "The Hunted", including over 30 new images. You can follow Jörg on Twitter to stay updated on this and many more topics.

PIC: "Mercy" is another rather disappointing episode in my view. Just two weeks before the finale, there are further gratuitous complications and only vague hints about how the mess could make some sense.

Here is my review of PIC: "Monsters". Patrick Stewart and James Callis deliver strong performances. The walk through Picard's mind may be revealing but it is also clichéd and further sidetracks the mission. Everything else is just unremarkable.

Hit & Run Tactics is a short story by Travis Anderson. Now employed by both Bajoran Militia and the Dominion, Ro and Macen lead their teams against several successive targets. Each one fast and brutal. No prisoners or witnesses will be left alive or taken today.

There are many additions to Jörg's old article with Observations in TNG: "The Defector", including about 20 new images.

My review of PIC: "Two of One" is unusually timely, perhaps because the episode is not overly complex. My issues with this season's storyline persist and there are new ones. Overall, however, I really like how "Two of One" handles the characters and creates some memorable moments.

Here is my review of PIC: "Fly Me to the Moon". The episode provides the right amount of story progress to satisfy our curiosity while keeping up the suspense. It introduces surprising new characters, but these are so contrived that the whole season is dangerously close to becoming absurd.

The Prophets in the series The Cause is the latest story by Travis Anderson. The Prophets complied with the Sisko's request to halt the Dominion advance but now they want to understand why. In the buildup to that, it is finally revealed where the Prophets went while the Cardassians occupied Bajor.

Here is a new ranking: 10 Starfleet Engineers Ranked by how much I value their work ethos and their accomplishments.

The latest episode of Star Trek Picard comes with interesting revelations and decent action. But there are aspects of the story that irk me, and I'm not talking of time travel paradoxes. Read my review of PIC: "Watcher".

Picard and his crew leave the desolate "Confederation" behind and arrive in the much funner 21st century. Read my review of PIC: "Assimilation".

Trigger warning: My review of PIC: "Penance" is a rant. The alternate reality scenario is less creative, less realistic and less tasteful than I could ever have imagined. But not everything about the episode is bad, so it is overall just a big disappointment and not a total disaster in my view.

Many additions to Jörg's article with Observations in TNG: "The Vengeance Factor". With about 40 new pictures, this one is now among the longest articles of the series.

There are small updates related to PIC: "The Star Gazer" in a about a dozen articles and counting, most of which are related to emblems and flags, such as in The Emblem of Starfleet Command. To find small changes on pages, check out my update comments, view the column of Pages with Any Recent Changes or follow the "update" signs.

The second season of Star Trek Picard begins with an episode that brings back old friends, foes and other acquaintances from classic Trek. Read my extensive review of PIC: "The Star Gazer".

New story by Travis Anderson: The Cause - Jem'Hadar. After the Dominion allied itself with Cardassia, the Jem'Hadar purged the DMZ of the resurgent Maquis settlers. But, as in most purges, there were un-enslaved survivors. And working with the Bajoran Militia, Ro and Macen will make certain that the Dominion will forever regret that fact.

Guest reviews and comments are open on Picard season 2. My own review of "The Star Gazer" will follow in a couple of days.

Catching up with Prodigy again. Here is my combined review of the mid-season finale "A Moral Star I/II".

Find my considerations about Time Travel in Star Trek: Prodigy in a new article, up to date as of "Time Amok". It took me some time and a couple of rewatches to figure out who or what actually traveled through time in this unexpectedly complex episode!

You can find several updates by Jörg in the article with Observations in TNG: "The Price".

See many additions by Jörg to the old article with Observations in TNG: "The Enemy".

I have also begun to include information from Discovery season 4 and from Prodigy season 1 to articles at EAS.

On an administrative note, comments on this site by new users or by guests now require moderator approval, at least temporarily. Regular commenters may already be on the whitelist, and I will add anyone else after one approved post.