The Evolution of the Ferengi Emblem

The Ferengi emblem first appeared in TNG: "The Last Outpost" and never underwent any significant modification. There are several color variations, as well as animated versions, which could be seen in the later seasons of DS9. The emblem also showed up on a banner and as part of the Ferengi architecture.

This article lists all variations of the Ferengi emblem that appeared in canon Star Trek.

The Ferengi emblem is most prominent in its green variation. We can see the green emblem as a forehead tattoo as soon as in TNG: "The Last Outpost". In the first two seasons of TNG, the tattoo is always monochrome green, whereas a light green inner area is discernible in later episodes of the series. The tattoo only appears in TNG and is never visible on any of the countless Ferengi of DS9. Its disappearance is almost instantaneous. We almost never see it in the two final seasons of TNG that were produced at the same time as DS9's seasons 1 and 2.

The first TNG Ferengi without the tattoo is Omag in "Unification II". Before that, we even saw the illusory Ferengi Starfleet officer in "Future Imperfect" with such a tattoo. For the last time (except for one understandable exception) we can see the tattoo in the episode "Rascals" in the 6th season. In the following episodes the tattoo is no longer visible. This applies to Solok in "Chain of Command I", Reygar in "Suspicions", Prak in "Force of Nature", and Bok's crew and Birta in "Bloodlines". Only DaiMon Bok himself, who appears once again after "The Battle", can be seen with a green tattoo. Most likely the tattoo was reproduced for reasons of continuity. It should be noted, however, that when Kol and Arridor reappear in the Voyager episode "False Profits", their tattoos are gone, although both still had them in TNG: "The Price".

Green tattoo in TNG: "The Battle"

Green tattoo in TNG: "The Price"

Other green emblems include a sticker on the freeze-dried slices of Plegg. A similar sticker can be seen on the inside of the cover of the Ferengi Rules of Acquisition in "Prophet Motive". It is not fully visible, but in "Little Green Men" a large green Ferengi logo is placed on the headrest of the captain's chair of Quark's Treasure.

Green emblem in DS9: "The Alternate"

Even before we saw the first Ferengi in person, "The Last Outpost" featured their distinctive green symbol on the underside of the Marauder. In all subsequent appearances of this ship, as well as of the Ferengi shuttle, which was seen for the first time in "The Price" and later in several DS9 episodes, the green symbol is clearly visible. Only when a Ferengi Marauder appears in the Voyager episode "Inside Man" (as CGI), this green symbol on the underside of the ship seems to be missing. The ship emblem on the physical models is different from those emblems seen on people, clothing, labels, monitors or anywhere else, as the two halves of the "pincers" around the inner circle touch. This small discrepancy is most likely not intentional. 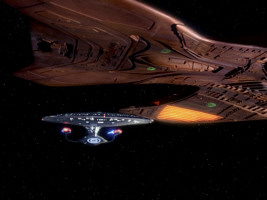 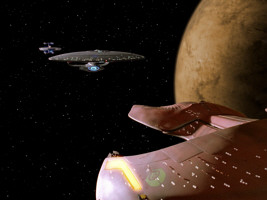 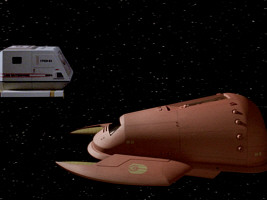 In two DS9 episodes, "The Maquis I" and "Body Parts", we can see a bottle with a Ferengi drink, on whose label there is a green logo with a yellow background. In "Bar Association" another bottle appears, showing a much larger version of the symbol with yellow background and border.

Green-on-yellow emblem in DS9: "The Maquis I"

In several late DS9 episodes we can spot the green logo on an orange background and with an orange border. The so labeled containers were created for "The Magnificent Ferengi" where they can be seen in Brunt's Ferengi shuttle. The same container appears in later episodes, in "The Sound of Her Voice" and "'Til Death Do Us Part" in freight compartments of DS9. We can also see this variation of the logo in DS9: "Who Mourns for Morn?".

Green-on-orange emblem in DS9: "The Sound of Her Voice"

Green-on-orange emblem in DS9: "'Til Death Do Us Part"

Green-on-orange emblem in DS9: "Who Mourns for Morn?"

Black-on-white emblem in DS9: "The Siege"

Black emblem in DS9: "Behind the Lines"

The black-on-light blue variation appears only twice inside Ferengi shuttles, namely in Zek's shuttle in "Prophet Motive" and in Quark's Treasure in "Little Green Men".

In red (on a black background) the Ferengi logo can be seen only once, on the writ of accountability Brunt attaches next to the door to Quark's Bar in "Family Business".

Since Quark committed a breach of contract in "Body Parts", FCA's black-and-white seals are located next to the front door to Quark's until "Ferengi Love Songs". For these seals, the design of the writ of accountability from "Family Business" was reused without other changes on a white instead of a red background.

In some episodes we can see the Ferengi emblem in gold. In "Family Business" and "Bar Association" it appears on a suitcase on which the logo is printed in gold. On the cover of the Ferengi Rules of Acquisition (seen in "Prophet Motive" and "False Profits"), the emblem is also in gold, but the circle in the center of the logo has been replaced by a red gemstone.

Ferengi PADDs show up in numerous DS9 episodes. Different Ferengi letters and symbols are usually located on its back. However, a PADD with the Ferengi logo on the back can only be seen in "Bar Association".

In "The Magnificent Ferengi", a logo in yellow appears briefly on a static display (before an animated version of the logo is inserted in later scenes).

Two Voyager episodes, namely "Drone" and "Inside Man", show diagrams of the Ferengi Marauder. In "Drone", it is a side view of the ship from the Star Trek Encyclopedia. In "Inside Man", a top view of the ship appears several times, apparently taken from the Star Trek Fact Files and with slightly changed proportions. It is noticeable that the Ferengi logo on the depictions is yellow, although it is green on the actual ship models. This error already exists in the original illustrations in the two publications. It is uncertain why the color yellow was wrongly used here. The same applies to the drawings of the Ferengi Shuttle from the Fact Files (which never appeared on screen). Interestingly, there is a photo of the model of the Marauder from "The Last Outpost", on which the logo can also be seen in yellow.

Yellow emblem in VOY: "Inside Man" 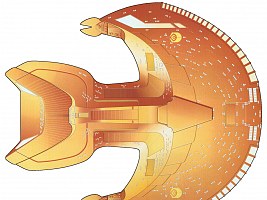 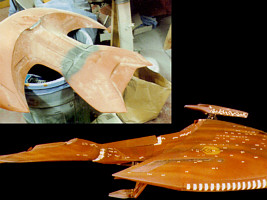 Since the first DS9 episode there is a Ferengi ATM on the Promenade. On the Ferengi logo we can recognize two shades of blue. The outer large area of the logo is light blue, while the inner three smaller fields are dark blue. We can see a similar version of the logo on a wanted poster in Odo's office and in the classroom on Deep Space 9.

Two shades of blue emblem in DS9: "The Nagus"

Two shades of blue emblem in DS9: "Improbable Cause"

In the Tower of Commerce in "Family Business" (and again in "Ferengi Love Songs") we can see the first animated Ferengi logo in pink and turquoise. The logo initially turns slowly into light blue. Then it stops and first of all the inner small sections of the logo in pink fly into the picture and replace the turquoise areas. Thereafter, the inner circle is also replaced, before the outer two major areas are replaced by pink fields. Afterwards the logo spins and the individual areas of the pink version are replaced by turquoise areas as above.

In "Business as Usual", for the first time a pink/turquoise logo is displayed on a still Ferengi screen. Here, the outer area of the logo and the inner area have different colors. The two major parts, as well as the circle in the middle, are pink, while the inner two areas are turquoise. However, in another scene in this episode, which shows a close-up of the screen with an animated version of the logo, it does not match the color of the unanimated version.

In "Ferengi Love Songs" and "The Magnificent Ferengi" we can see an animated version of the logo, in which all outer areas are colored pink, while the sphere inside the logo is turquoise. During this animation, Ferengi characters are slowly faded in. In "The Magnificent Ferengi", however, we also see an animation of the logo, in which the Ferengi characters are missing, at the beginning of the conversation with Leck. Finally, the animation also shows up in DS9: "Who Mourns for Morn?".

Pink/turquoise emblem in DS9: "Who Mourns for Morn?"

Other Uses of Emblems

Emblem on a banner

In TNG: "Bloodlines" a Ferengi flag or banner appears behind DaiMon Birta. The script of the episode explains:

He's speaking from a Ferengi ship's Bridge, and behind him we see a BANNER that bears his personal crest.

The banner features the Ferengi logo in yellow with a thick black border. The banner itself is burgundy on the left and turquoise on the right. On closer inspection, we can see that the two halves of the logo are farther apart than it is usually the case. So here it is a real form variant. The flag was never seen again.

Emblem on banner in TNG: "Bloodlines"

In four episodes, the design of doors and walls takes up the Ferengi emblem. The main entrance door to Ishka's house in "Family Business" and "Ferengi Love Songs" clearly shows elements of the Ferengi logo. We can see that the same door was reused for the "antechamber to the Divine Treasury" in Quark's dream in "Body Parts". Inside the Ferengi ship in ENT: "Acquisition", a simplified version of the logo can be seen on several walls.

Emblem in architecture in ENT: "Acquisition"

In a similar fashion, the Ferengi symbol can be seen on the dabo table in Quark's.

Emblem on the dabo table in DS9: "Statistical Probabilities"

The Ferengi emblem is customarily depicted in green because it appears like this on ship hulls, as well as in the form of the forehead tattoos of the Ferengi. The latter, however, vanishes all of sudden with the beginning of DS9. In the following, we can see many color variations. It is possible that green is rather the color for (military) ships and ship crews, of which we don't as many in DS9 as still in TNG. But overall there is no real pattern that would allow us to attach significance to the colors.

The shape of the emblem remains overall consistent. The difference between the ship hull version and the ones seen elsewhere dates back to the preproduction of TNG and should be rated as a small mistake. The remaining shape variations are stylistic changes, rather than logos that were purposefully redesigned or with a different meaning.

Some screen caps from TrekCore. Additional graphics by Brad Wilder.