Geordi La Forge was born blind (TNG: "Encounter at Farpoint"). At the age of five years, he received his first VISOR (TNG: "Hero Worship"). VISOR is an acronym for "Visual Instrument and Sensory Organ Replacement", although never spoken out in any episode. The VISOR was later replaced with implants. On some occasions, we could also see Geordi's real eyes. This article illustrates the development of Geordi's VISOR, implants and real eyes, including temporary, future and fake reality versions.

In 2364, Geordi wears a VISOR consisting of a silvery metallic frame with golden tines. The tines are alternatingly affixed to the upper and the lower part of the frame. The total number of tines is 68. The location of the neural interface to Geordi's temples is indicated by a reflective red dot.

Geordi receives a new VISOR prior to "The Child" and keeps this model until after "Star Trek Generations". This VISOR too consists of a silver frame and golden tines. The tines, however, are uniformly affixed to both the top and bottom of the frame. The tines are grouped in pairs in a way that #1 and #2 are slightly closer together than #2 and #3. The number of tines is still 68 (which is surprising because the new tines appear to be somewhat thinner and closer together, but this actually isn't the case).

Second VISOR in TNG: "The Enemy"

Geordi in TNG: "The Child"

Geordi in TNG: "The Defector"

Geordi in TNG: "The Best of Both Worlds II"

In TNG: "Loud as a Whisper", Dr. Pulaski suggests two options to Geordi La Forge to replace his unwieldy VISOR. The first would be optical devices that look like normal eyes but with a slightly lower performance than the VISOR, which Geordi declines. The second option involves a stimulation of his optical nerves, plus replicated eyes.

The red dot of the neural interface of the second VISOR is initially slightly recessed, almost flush with the surface. Since the season 5 episode "Violations" it is raised.

Geordi in TNG: "The Next Phase"

Geordi in TNG: "Eye of the Beholder"

It seems the inside of Geordi's VISOR was covered with some metallic mesh for a close-up and perhaps a few more takes in TNG: "Q Who", most likely in order to hide his otherwise visible normal eyes. 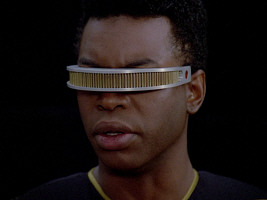 VISOR with inner cover in TNG: "Q Who" 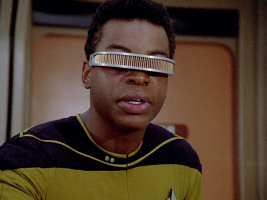 VISOR with inner cover in TNG: "Q Who"

A spare VISOR is among the items that Berlinghoff Rasmussen steals from the Enterprise-D in TNG: "A Matter of Time". It is the same model that Geordi normally wears. Since Geordi does not appear inside the time pod where we can spot the VISOR, we may assume it is the very same prop (unless, of course, an identical spare prop was built anyway).

Spare VISOR in TNG: "A Matter of Time"

Geordi without the VISOR in TNG: "The Mind's Eye"

When Geordi takes off the VISOR, we can see his pale eyeballs. His eyes are either underdeveloped, lacking an iris and pupil, or he simply suffers from a strong cataract. Since the latter can be treated with a high rate of success already today, it is rather unlikely though.

The first time that Geordi can be seen with electromechanical ocular implants in a permanent timeline is in "Star Trek: First Contact". He still has this type of implants when we last see him in "Star Trek Nemesis". The implants have an overall blue iris that resembles that of a natural human eye, but features characteristic darker segments. The pupil is adjusted mechanically. It seems that the technology of eye implants has been improved since Pulaski first suggested it in "Loud as a Whisper", and hence became an option for Geordi. He may have chosen the light blue color and the clearly visible mechanical shutter in order not to conceal that he would be blind without the use of technology.

It is obvious that the effect of the metaphasic particles in "Star Trek: Insurrection" on Geordi's eyes was not permanent. We see him with implants again in "Star Trek Nemesis". For Geordi, this must have implied the removal of what was left of his temporarily regenerated eyes and a new adaptation of the implant.

In an attempt to bribe the crew with omnipotence in TNG: "Hide and Q", Q provides Geordi with the eyesight he never had, and gives him dark brown eyes (which are, of course, LeVar Burton's real eyes).

Geordi with temporary eyes in TNG: "Hide and Q"

In a fake future created to manipulate Commander Riker, Geordi La Forge can be seen with natural eyes in TNG: "Future Imperfect". Geordi describes these eyes as "cloned implants". Although this fake future has no relevance for the real development of Geordi's eyes, it may be much the same technology as the one Pulaski proposed in "Loud as a Whisper".

In TNG: "Identity Crisis", an alternate VISOR can be seen in the recordings and holodeck reconstructions of Geordi's previous stay on Tarchannen III in 2362. Here Geordi wears an all-silver VISOR. The neural interface is indicated by a silver rectangle, rather than by a red dot.

Past Geordi with early VISOR in TNG: "Identity Crisis"

Past Geordi with early VISOR in TNG: "Identity Crisis"

Geordi appears with natural brown eyes in TNG: "Interface", but only in a visualization of his away mission. In reality, Geordi wears a sensor suit to control a probe for use in hazardous environments.

In the present time frame in TNG: "All Good Things", Geordi's eyes are restored under the influence of anti-time (although this doesn't make much sense, because Geordi never had working eyes that could be regenerated or reverted). These eyes seem to be blue, unlike the ones that would grow back in "Insurrection". But the regenerating iris (that was previously missing) may not yet have reached the final level of pigmentation in "All Good Things".

In the future time frame of the same episode, the old Geordi La Forge can be seen with bluish implants. These implants look similar as those that he will have in the "regular" future timeline in the three last TNG feature films.

Present Geordi with eyes in TNG: "All Good Things"

Future Geordi with implants in TNG: "All Good Things"

Captain Geordi La Forge appears in the alternate future of VOY: "Timeless", set in 2390, again with bluish implants. The contact lenses resemble those that were already used in "All Good Things" and those that can be seen in the TNG movies, but the resolution of the SD footage of Voyager doesn't allow a better look.

Geordi's eyes temporarily regenerate under the influence of the metaphasic particles in "Star Trek: Insurrection": "The cells around my optic nerves had... started to regenerate.". This is odd, considering that in order to accommodate the implants, everything that may have been left of his natural eyes at the time Geordi had the VISOR would have to be removed. His eyes would have needed to grow back from the ground up in "Insurrection". Even if the natural eyeball was still in place, this would include the retina, the lens, the iris, plus all necessary muscles and blood vessels. And as already in "All Good Things", there was nothing to rejuvenate or regenerate about Geordi's eyes because they were never functional. Anyway, Geordi suspects that it may not last, and he is right about it. In "Nemesis" he needs the ocular implants again.

Most screen caps from TrekCore.