There are several hundred humanoid species in the Star Trek Universe. Many of them look exactly like humans, without any make-up such as facial ridges that could let them appear at least a bit alien. What started off as a cost-saving measure in The Original Series, has become some sort of a trademark of Star Trek. Even in recent years there are still new aliens without any special make-up.

This article lists all species that are indistinguishable from humans or very close. It then discusses the existing canon attempts to explain the phenomenon and points out the remaining issues.

The following species look exactly like humans, although they must be assumed to have a different genetic background.

These species look like humans, but they have distinct characteristics or abilities that are not limited to single individuals.

It seems very unlikely that life on different planets could take a similar or even the same direction, at least not without interference from outside. The ultimate "parallel Earth", an exact copy of our planet as seen in TOS: "Miri", is definitely an artificial creation but remains unexplained in the episode.

Yet, as soon as in The Original Series, there were attempts to explain the phenomenon of "human aliens": 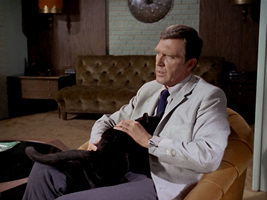 The first humanoids in TNG: "The Chase"

The prevalence of humanoid (but not particularly of human-looking) species is ultimately explained in TNG: "The Chase". In this key episode to the Star Trek Universe, Professor Galen and Picard's crew find evidence that four billion years ago the first humanoid civilization explored our galaxy, and they were disappointed because they found themselves alone. To preserve their heritage, they spread encoded DNA fragments across many Class-M planets throughout the galaxy, thereby triggering a development similar to their own. Aside from the evolution schedule, the DNA fragments, correctly assembled, contain a message to their descendants, namely humans, Klingons, Cardassians, Romulans and all the other humanoid races of the galaxy, who are in some way related to each other.

TNG: "The Chase" adequately justifies why most of the sentient lifeforms are humanoid. Yet, why do the countless above species look exactly like humans, whereas there is no second species akin to the Klingons, Ferengi or Cardassians? The Mintakans (TNG: "Who Watches the Watchers"), who are described as "proto-Vulcan", are the only explicit example of a prehistoric kinship of two non-human races, in an episode that aired three years before "The Chase". At that time it may have been the intention that "proto-Vulcans" are the descendants of an early spacefaring race that is the precursor of the Vulcans (and the Romulans likewise). This is in line with Spock's remark from TOS: "Return to Tomorrow" that colonization by Sargon's people may "explain certain elements of Vulcan prehistory".

It is obvious that human-looking aliens may help save make-up budget and time and that aliens with sparse make-up are easier to play by the actors. Lately, Voyager and especially DS9 have shown fewer of the "cheap" human look-alikes than TNG or TOS, as can be seen in the above table, although they still appear in ENT and even DIS. Another practical explanation is that a race that looks like Klingons but is not Klingon would likely confuse viewers.

Anyway, what is the fictional explanation? One theory is that, similar as with the obsolete justification of the Klingon metamorphosis, the make-up technique or budget simply didn't allow to show all aliens the way they really look. But that could not be applied to more recent human-looking aliens.

If we accept exactly how they look on screen, it is possible that some of the aliens are actually closer related to humans, and that they were abducted from Earth like Gary Seven's people (TOS: "Assignment: Earth"), Miramanee's people (TOS: "The Paradise Syndrome") or the 37's (VOY: "The 37's"). However, it would have been noticed very quickly and should have been mentioned if aliens were genetically identical to humans. And why should the Preservers or other superior or early races kidnap almost exclusively humans and distribute them throughout the entire galaxy? Maybe they were human-looking themselves? Another solution is that humans might represent some sort of basic way that evolution most likely takes on an average Class-M planet and the other races developed under special environmental conditions. I don't like this idea because it's geocentric. It may facilitate the problem if we simply assume that most of the human-looking aliens have distinguishing marks and a different metabolism that is usually not visible.

Another point that alleviates the problem is that some of the less prominent non-human aliens look alike because of make-up re-use. In addition, many alien make-ups are so similar that they could be mistaken for variations within the same species. Especially in the three last seasons of Star Trek Voyager we see dozens of different races with not quite the same but very similar pronounced nose bones (with Icheb's species being the most prominent example). So humans are not really the only species of which many clones or spin-offs seem to exist.

Another issue, however, is that humans easily seem to recognize each other although there are plenty of other species that look the same. Chakotay, for instance, saw that Riley Frazier was human at the first glance (VOY: "Unity"), and Janeway guessed that Seven of Nine was human (VOY: "Scorpion II"). In both cases the odds of meeting humans in the Delta Quadrant, even among Borg drones, were close to zero, and much rather they should have belonged to one of the many look-alike races that exist in the Delta Quadrant as well. Also, with so many human look-alikes and 150 member worlds of the Federation, why are human-looking Federation members and especially human-looking Starfleet crew members automatically meant to be Terrans (not to mention that most of the Terrans are Americans, as their names suggest)? So is it a certain smell or any other sense I haven't discovered yet (probably because I have met no aliens I could compare it with ;-))?

The predominance of human(oid) races is a concept useful to save budget and unpleasant hours in the make-up room, and to show facial expressions of actors playing aliens. We might have appreciated some more alien-looking species here and then, but TNG: "The Chase" eventually solved the basic problem. Personally, I don't mind that many aliens look exactly like humans. What bothers me more is that, while humans are dominating Starfleet anyway, all individuals that look human actually are human, except they live on some backward, isolated planet, like in so many TOS and TNG episodes.

Some screen caps from TrekCore. Thanks to LordKir for suggesting invisible distinguishing marks, to Doug for having a look at the close captioning concerning Ter(r)ellians and to Keith Thompson for the hint about Sargon's people in "Return to Tomorrow". Thanks to Joseph for a couple of additions.