Here is a collection of visual in-jokes that may or may not have been meant to be recognizable. We deliberately picked lesser known or newly discovered jokes. Please take the following pictures with a grain of salt. It is not our intention to acknowledge them as canon and then discuss the inconsistencies away.

In "Star Trek (2009)" we can see at least two ships inside the Narada that don't belong there: the T'Plana Hath from "First Contact" and a TOS-style Romulan BoP.

Torpedo from another Enterprise?

In "Star Trek Into Darkness" we can see the label CVN-65 on one of the torpedoes, in real life the registry of the aircraft carrier USS Enterprise (that was retired in 2012).

The spacesuit miniature built for Kirk's excursion to recover Spock in "Star Trek: The Motion Picture" can be seen (for just a split second) as decoration of the spacedock lounge in "Star Trek: The Search for Spock". A cue to the name and theme of the movie?

Spacesuit puppet in "Star Trek I"

The symbol used by the mental hospitals on Tantalus V and Elba II in TOS, consisting of a hand, a dove and a sun, appears in slightly rearranged form, without the dove, on the Bajoran festival in DS9: "Fascination". The similarity is either a homage or a nice coincidence.

"Hands and Sun" emblem in TOS: "Dagger of the Mind"

"Hands and Sun" emblem in TOS: "Whom Gods Destroy"

A Bajoran mandala that appeared as a wall decoration in several DS9 episodes was created from 40 slightly overlapping rotated copies of a DY-100 aka Botany Bay side view. 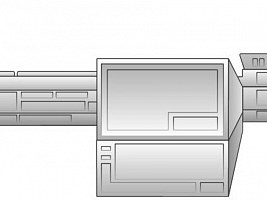 Uhura's ear piece reappears after 35 years in a completely different role. Four of them serve as parts of a forcefield generator in ENT: "The Crossing".

Forcefield generator in ENT: "The Crossing"

An Enterprise-E saucer can be seen amongst the wreckage of the Borg sphere in ENT: "Regeneration", a cue to "First Contact". It is probably the same saucer miniature that was filmed in "Nemesis" for the crash with the Scimitar. 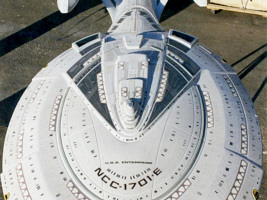 imperial_guard_player tells us: "I am currently studying visual effects at the Academy of Art in San Francisco and I have had the opportunity to get up close and personal with some props used by Industrial Light and Magic. The model used for the Nemesis crash sequence sustained some nasty damage. In Nemesis when the Scimitar reverses thrust and pulls away from the Enterprise you can see the frontal arc of the Enterprise's saucer has been shredded. This damage was apparent on the model itself.

To create the ramming effect for Nemesis the two models were suspended upside down and rammed into each other in real time at roughly 12-15 miles per hour and filmed with a high speed camera. The film was then rotated 90 degrees and slowed down so that it appears that the debris from the impact is 'falling up' in the zero g environment of outer space.

As far as the saucer seen in 'Regeneration' I would not at all be surprised if a new, fresh model was fashioned. The detail seen on that saucer portion is not very heavy (obscured by atmospheric special effects), as such, I could see it being entirely possible that a new model was fashioned specifically for these shots."

The in-jokes on the master systems display in the Enterprise-D main engineering are described as follows in the TNG trivia list: "In the saucer section, right above the Captain's Yacht, there is a duck. A half inch to the left and a little bit down, there is a mouse. Slightly to the right of the mouse, there is a 'Slippery When Wet' sign. In the shuttle bay, there are three big shuttles, two small shuttles, and a Porsche. To the right of the duck, about one inch, there is a DC-3 cargo aircraft, and, in that same rectangle, there is a symbol of a woman and a child (the symbol for Canada's 'Family' rating for movies). Also, right under the warp pylons, there is a registered trademark symbol. In addition, there is an image of NOMAD on it's side, center of the saucer section, forward." On a reproduction of the MSD we can identify (saucer section left to right): the Porsche, the mouse, the "Slippery When Wet" sign, the duck, the still uncertain "family sign", the DC-3 and Nomad from TOS: "The Changeling".

All these in-jokes were not intended to be identifiable on screen. Therefore they were usually masked whenever the display was shown up close - with a few exceptions. In TNG: "The Mind's Eye" the masking is successful. Except for the supposed "family" sign everything that does not belong on the MSD is covered. In TNG: "Brothers" we can clearly recognize the paper sheets that were used for masking, since they are dull unlike the otherwise glossy surface of the MSD screen. Also, Nomad is still visible here. In TNG: "Galaxy's Child", finally, all in-jokes can be seen.

As a tip of the hat to Gene Roddenberry's nickname "Great Bird of the Galaxy", a computer display in TNG: "The Naked Now" shows the image of a parrot with Roddenberry's head on it. 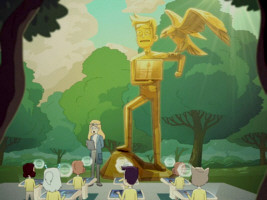 The "Great Bird of the Galaxy" is explicitly referred to as the "Boimler Effect" is commemorated in the far future.

The engineering protocol shown in TNG: "Galaxy's Child" has an odd last point: "Tonight on HBO". How does this get along with Data's statement from TNG: "The Neutral Zone" that television as a form of entertainment vanished after 2040? 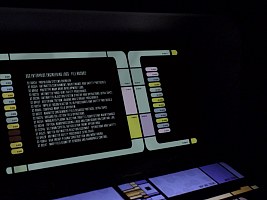 The engineering protocol was recreated from scratch for the remastered episode, in the course of which the in-joke was removed.

In DS9: "Rivals" Quark brews a cocktail for Bashir. When Bashir examines the ingredients, he finds out that it contains a sedative. On the top of the list, however, we find "Dilithium flavoring extract oz. 435".

While most of the text on Henry Starling's computer display makes sense, two groups of round structures of unknown function are just labeled as "big blue/gray balls".

In DIS: "Context is for Kings", Michael Burnham is assigned with checking some code. In 4k resolution we can recognize some familiar keywords such as DWORD in the code, denoting a 32-bit unsigned integer in Microsoft Windows. In fact, this is actual Windows code, and not just any code. It seems to be the decompiled Stuxnet worm. Discovery is DOOMED!!

Windows code in DIS: "Context is for Kings"

It was impossible to notice before the DVD came out, but in VOY: "Latent Image" the reflections inside the Doctor's holocamera are composed of a multiplied and rotated image of Ahni Jetal, the young ensign who died after an alien attack, causing a trauma in the Doctor. This well-concealed in-joke is a literal interpretation of the episode name! Her image appears in the same fashion in VOY: "Life Line". On another occasion, in VOY: "Drive", the lens is subdivided into seemingly irregular pixels which have the shape of the convoluted swans in the famous drawing of MC Escher.

Escher's swans in the lens in VOY: "Drive"

The pages of the "Dixon Hill" story as seen in TNG: "The Big Goodbye" are full of illustrations of TOS and movie characters. All of these pictures are (more or less accurate) drawings from the FASA role playing source book The Federation. Some of the unlabeled pictures are from the same book but don't depict characters of the canon Trek Universe.

In a list of chemicals in TNG: "Night Terrors" with otherwise "serious" sounding technobabble many of the names have been takenfrom members of the TNG production staff at that time. 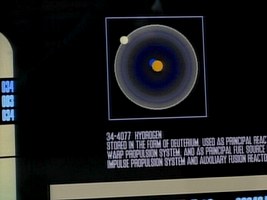 Here is a transcript of the screen caps (compiled by Paul Eisner) and our ideas to whom the names refer:

High-yield version of standard industrial ultritium, used in terraforming applications. Activated with microwave pulse ignition devices. Intended for use when nuclear explosives are not desirable.

Ronald D. Moore, producer, and Ronald B. Moore, visual effects supervisor: Why both of them? "Poly-Ron-ite"!

Semi-solid propellant used in ullage thruster devices and emergency jettison thrusters. Characteristics include an shelf life in excess of 10 standard years without significant deterioration of performance.

High-yield reactant used for emergency ignition of microfusion devices. Manufactured in 2.7kg slugs for use in Type VI reactors.

Non-oxydizing chemical explosive used in class-N(2) planetary environments for engineering applications. This substance is unstable in oxygen atmospheres and must be handled in accordance with SFRA 2884 3 safety regulations.

This sounds like it refers to three people, all named Nick or Nicholas. But no one in a prominent position behind the scenes was named Nick when the episode wasproduced.

Quantum-charge reversed form of deuterium, used as principal fuel source for ship's warp propulsion system. Due to highly volatile nature, antimatter must be stored in magnetic confinement pods per SFRA 3207 0.

Energetic carbon-based biological reactant, used for in the bio-neutralization of organic waste products prior to electrolytic fractioning and recycling. Stored in liquid form.

This one is somewhat speculative because it is not shown on the LCARS screen, but only mentioned (by Data). It sounded like "Callendennium" though. With single-"l" and/or single-"n" in the words, the sound of the names would differ too much from the way Data spoke them. Description given in the episode: Element which is extremely volatile when combined with hydrogen.

All graphics were redone for TNG-R, and the original text was supplemented with new sentences in many cases. The depiction of antideuterium was corrected (which is not a compound).

Some screens repeated in the original episode after the first cut to Deanna and Data. For TNG-R, new screens were created from scratch. The new substances were named after various people from CBS Home Entertainment, except for Walkerite 342:

Some substances were already on the list, but the spelling or the nomenclature was changed:

Thanks to Robert Heckadon, Paul Eisner, Matt Wright, Christopher Havel and Michael Minnick for several contributions! Kevin pointed me to the ships inside the Narada. Alexander found the CVN-65 reference in "Into Darkness". The meaning of "Poly-Ron-ite" was found by Dan Carlson.