Shuttle TroubleUse of the Transporter

Enterprise NX-01 comes with no more than two(!) shuttles, as mentioned in ENT: "Terra Nova" and implicitly in "Impulse". This is unbelievably short-sighted on a starship built without a transporter as a regular means of transportation. We need to bear in mind that the transporter is only "experimental" and the crew is afraid of it. Realistically, Enterprise would have to rely even more heavily on the shuttle pods than seen in the show. But each of them can transport only six people. And what about the cargo? I doubt that they would or could beam large amounts of food supplies. So what happens if one shuttle is defunct and the other one is on the way, exactly as it happened in "Impulse"? Earth is several months away most of the time. Doug Drexler, designer of NX-01, has acknowledged the problem. He suggests: "In my opinion we have two pods that are on 'hot standby,' and two more that are 'mothballed' and can be made good to go in two days working normal shifts, one day working double shifts." 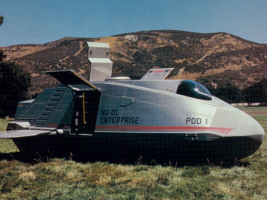 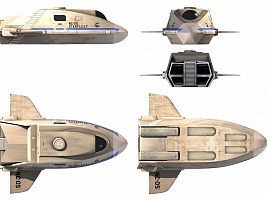 The situation worsens, considering that several times shuttles were damaged, and may even be a total loss:

Considering that Shuttlepod One reappeared briefly after it had been left behind on the moon in ENT: "Dawn", I'm not taking into account the shuttle numbers. Maybe the registry on another shuttle (if there was any left intact) was simply repainted.

The frequency of shuttle accidents unpleasantly reminds us of Voyager's shuttle losses (up to 17 altogether). But unlike the 24th century ship Enterprise doesn't have replicator technology (unless shuttles were replaced or repaired at the station in "Dead Stop"). With at least one shuttle lost and likely the rest more or less damaged towards the end of season two, it is about time for Enterprise to return to Earth for resupply. This probably happened in "The Expanse". Yet, it remains short-sighted to first give the ship only two shuttles and then crash them frequently.

Use of the Transporter

The question whether Enterprise could already have a transporter in the first place is discussed in the article about A Close Look at 22nd Century Technology.

"Broken Bow" establishes that transporter technology is still uncommon but has been "approved of for biomatter transport", meaning that it would be available to beam crew members. We should expect that the transporter to be more than just decoration and to be used when useful or necessary - at least in case of an emergency when a shuttle could not be used or was too slow.

No beaming in "The Communicator"

Here are the episodes with transporter activity and how and why it is used.

Transporter not used, with a reason

These are the episodes in which the transporter is not used, and either a reason was explicitly mentioned, or we may easily make up one.

Transporter not used, without a reason

These are the episodes in which the transporter is not used and is not even considered an option, although an emergency situation would require it.

Summarizing, considering that it would have been better to use the "unsafe" transporter instead of letting someone die, there are quite a few cases of careless writing. Fortunately, the tendency is not yet strong enough to provoke the interpretation that the producers or episode authors intentionally "forgot" the transporter out of a strange feeling of remorse because they introduced the technology prematurely.

Thanks to Keith Ichinaga for the suggestion to care about shuttle crashes, to Graham Kennedy for reminding me of the crash in "Desert Crossing" and the repair station in "Dead Stop", to Christian for a correction about "Dawn", to Jason Bullock for another necessary correction, to James Stewart for a correction about the transporter, to Mark Johnson for another transporter use and to Tim Smith for trying to find rationales for the non-use of the transporter.