Re-Uses of the Angel One Matte Painting

The matte painting of a cityscape originally made for TNG: "Angel One" is the probably most often re-used planet view of Star Trek. It could be seen in six episodes of three series, however, with a number of subtle modifications.

The Angel I matte painting is composed of two parts. The ancient-looking building on the left edge, the tree on the right and parts of the closer buildings are on a separate level, giving the whole scenery more depth (a slight 3D effect) when the camera zooms in. The tree is transparent between the twigs and leaves in order not to impair the effect. In addition, people were inserted into the scene. They can be seen walking around on the square on the main building in the center.

The two levels of the Angel I scenery

There are two versions, one day and one night shot, but not all episodes make use of both of them. In all appearances of the matte painting the camera zooms into the center of the picture, whereby the left building disappears from the field of vision. The duration of the take and the zoom depth is different in the six episodes.

In its first appearance as Angel I's capital in TNG: "Angel One" we can see the day as well as the night sequence.

Angel I, night, closest, in TNG: "Angel One"

Brush strokes are recognizable in HD, giving away that this is a painting. Still, it looks stunningly realistic. 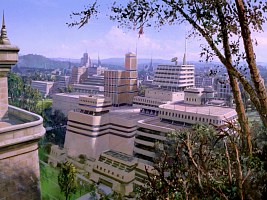 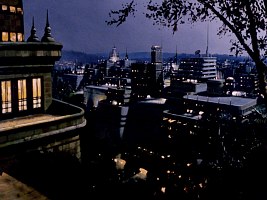 The matte painting was re-used without changes for the planetside facility of Starbase 515 where Picard's heart surgery takes place in TNG: "Samaritan Snare". It is only remarkable that the initial zoom is a bit farther away in the day and closer in the night than in the respective shots from "Angel One".

The matte painting of Starbase 515 was modified to look less like Angel One for TNG-R. Three rounded roof tops were added, and most notably a helix-shaped tower. The tree in the foreground was changed as well. In addition, a flock of birds was added, the tiny human figures which were part of the original matte painting are moving now and the Einstein can be seen landing on a platform. 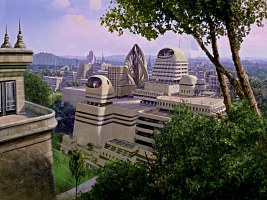 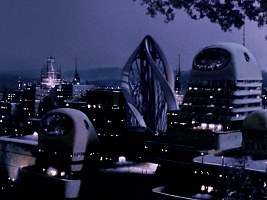 While the painting remains substantially the same, the colors are more intensive on Malcor III in TNG: "First Contact". The hue is overall more green compared to Angel I. Moreover, the building on the left and the tree on the right are not visible at all. The night shot does not show up in this episode.

It is also noteworthy that a completely new painting was made to represent another part of this planet. But the style was quite obviously inspired by the existing Angel I scenery.

Both appearances of the matte painting remain unchanged in the remastered episode. 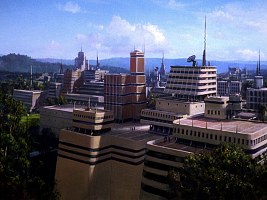 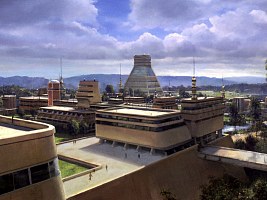 In order to credibly represent Krios, a Klingon colony, in TNG: "The Mind's Eye", the night version of the matte painting was extensively modified. The tree was removed from the foreground. The building on the left was modified by changing the window style and adding a slanted supporting wall. Vertical struts were added to the horizontal window rows of the central building. A story was added to the smaller building sitting on its top. The most changes can be seen in the background of the painting. The characteristic red building was cut down and a number of new buildings were inserted, most prominently the one with the big Klingon emblem that unmistakably demonstrates who is in charge of the planet. There is no day shot in TNG: "The Mind's Eye".

Krios in TNG: "The Mind's Eye" 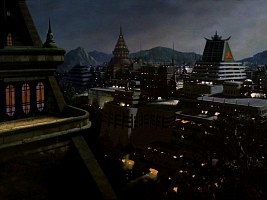 The night shot in DS9: "Dax" begins a bit earlier than the one in "Angel One", now showing four full windows of the building on the left. It seems that the matte painting appears in its original state. But there are two exceptions: The tree has lost some leaves, and a new tall building was added in the right half. Curiously, this new building is missing in the following day shot of the same episode, and the tree has all the leaves again. The obvious reason is that the VFX people just forgot to modify the day shot likewise and most likely just used stock footage for it. But we must be amazed how the inhabitants of Klaestron demolish large building in a matter of hours. And how fast the local trees can grow new leaves. ;-)

There is nothing special about this appearance of the matte painting in VOY: "Ex Post Facto". The far night shot is the original one, without the new building and with more leaves. The day shot is essentially the same as in "Angel One", except that maybe the sequence is a tad longer (with the camera zooming in a bit more).

Here is a summary of all appearances of the Angel I scenery:

Observations in TNG: "Angel One"

Observations in TNG: "The Mind's Eye"