Re-Uses of the Vasquez Rocks Location

Vasquez Rocks is a Los Angeles County Park of 745 acres. It has been used for location shooting in numerous movie and television productions, including eleven times for Star Trek:

1. Amusement Park Planet in TOS: "Shore Leave" (where Kirk gets beaten up by Finnegan)

2. Metron Asteroid in TOS: "Arena" (that the Metrons have set up for Kirk to fight against the Gorn)

3. Lazarus's Planet in TOS: "The Alternative Factor" (site of the rift between the universes)

5. Vulcan in "Star Trek IV" (the peak to which Spock retreats to meditate)

6. Mintaka III in TNG: "Who Watches the Watchers" (site of the "duck blind")

8. Xyrillian homeworld in ENT: "Unexpected" (holo-simulation, not on location)

10. Vasquez Rocks in PIC: "Maps and Symbols" and "The End is the Beginning" (the only time the place appears as what it really is)

11. Ni'Var (Vulcan) in DIS: "All Is Possible" (two different places, not on location, heavily digitally manipulated)

It is not possible to identify all parts of Vasquez Rocks beyond doubt in the episodes and movies because it may appear very different depending on the camera angle - fortunately, because otherwise the various planets would look the same. Nonetheless several parts of the location can be clearly recognized.

Aerial view of Vasquez Rocks
(based on Google Maps)

The most characteristic part of Vasquez Rocks is a massive slanted rock formation with two spikes, consisting of distinct plates. On postcards and on private photos this formation is most often depicted from a plain on the north side where a parking lot is located. We will refer to this side as the front of the rock. The two peaks are pointing to the left when looking in this direction.

In TNG: "Who Watches the Watchers" Riker and Troi, dressed as Mintakans, walk along the front side of the formation. With a couple of screen caps assembled to a panorama, we get a quite good impression of this side of Vasquez Rocks. The eye-catching slanted rocks are located on the right, with the double peak pointing to the left. The "duck blind" for the observation of the native Mintakans is located in the peak. Many years later, PIC: "The End is the Beginning" shows the same panorama in one shot, thanks to the extreme widescreen format of the series (one of the very few occasions where this waste of TV screen space actually makes sense).

Front panorama in TNG: "Who Watches the Watchers" 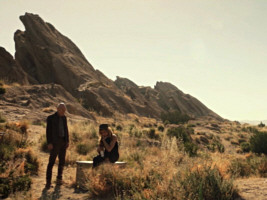 Front panorama in PIC: "The End is the Beginning"

The characteristic rocks were previously filmed for two TOS episodes from roughly the same angle, as a comparison of the following screen caps from TOS: "Shore Leave" (right peak) and TOS: "Friday's Child" (left peak) demonstrates. On the latter picture we see the moment of the explosion that is supposed to throw back the Capellan pursuers.

Finnegan at the tall rock in TOS: "Shore Leave"

Capellans at the tall rock in TOS: "Friday's Child"

The screen cap from TOS: "Friday's Child" brings to light that a path leads up the rock between the uppermost double peak and the lower peak on its left. The same episode also provides us with a view in opposite direction, from the path down on the plain.

Another path to the other side of the tall rock is located on the very right edge of the front views examined so far. In TNG: "Who Watches the Watchers" the Mintakans take this way, as does Kirk in TOS: "Shore Leave".

Right path in TNG: "Who Watches the Watchers"

Kirk in front of the big rock in TOS: "Shore Leave"

The following screen cap from TOS: "Shore Leave" may show the fork. The narrow left path leads up the rocks, the right one around the rocks.

Kirk at the fork in TOS: "Shore Leave"

A shot of the front side of Vasquez Rocks was used for the Vulcan landscape near Amanda and Sarek's house in "Star Trek (2009)". We can see the tall rock in the center and the somewhat lower rock on the left. The latter has been digitally supplemented with a rock piece facing in opposite direction (to the right), most likely a part of Vasquez Rocks as well. Possibly a duplicate of this rock piece, now tilted to the left, can be seen on the right. 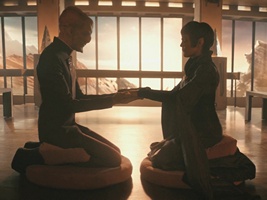 View of rocks on Ni'Var in DIS: "All Is Possible"

Two different portions of Vazquez Rocks appear on Ni'Var (formerly Vulcan) in DIS: "All Is Possible". Only the second shot, during the meeting of Saru with President T'Rina, shows a definite part of the real rock formation, visible at the very right.

TOS: "Arena" prominently features the rear side of Vasquez Rocks. Compared to the previous prospects the following images show the two spikes from the opposite side, so they are now facing to the right. More than 50 years later, almost the same angles were chosen for two shots in PIC: "Maps and Legends".

Rear side panorama in TOS: "Arena"

Rear side close-up in TOS: "Arena" 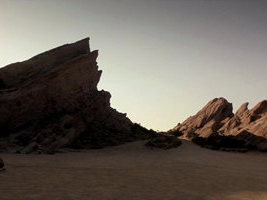 Rear side panorama in PIC: "Maps and Legends" 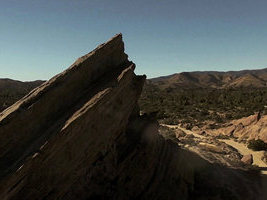 Rear side close-up in PIC: "Maps and Legends"

The rock can be seen from roughly the same angle in TOS: "The Alternative Factor", "Star Trek IV" and VOY: "Initiations". In ENT: "Unexpected" the camera position was close to the more rounded rock on the right.

Rear side in TOS: "The Alternative Factor"

Rear side in "Star Trek IV"

Rear side in VOY: "Initiations"

Rear side in ENT: "Unexpected"

The almost panoramic view of the rear side with Kirk and the Gorn reveals something like a road between the tall rocks on the left and the somewhat lower ones on the right. This is quite odd on a planetoid that the Metrons have prepared, for we wouldn't expect them to use wheeled vehicles. ;-) In one take we can even clearly see how the Gorn stands in the middle of that road. The other picture is taken from a somewhat different angle avoiding to include the road and shows more details of the right rock formation. These rocks were also clearly visible from the other side in the Mintakan panorama.

Gorn and road in TOS: "Arena"

Raffi's trailer is located at the rear side of the rock formation in PIC: "The End is the Beginning". The relative position to the rocks, however, is not consistent and changes more than once during the episode. Also, the surroundings of Vasquez Rocks were heavily edited for the establishing shot in the episode, adding higher mountains than in reality (probably to obscure man-made structures of the 21st century). 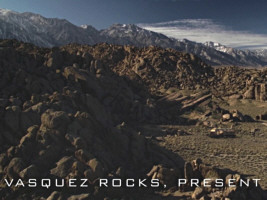 Location of Raffi's house #1 in PIC: "The End is the Beginning" 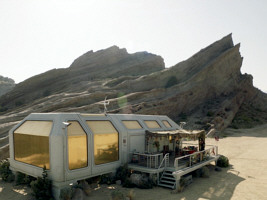 Location of Raffi's house #2 in PIC: "The End is the Beginning"

We can make out the same rock hill with a rounded top in a number of episodes. This hill is located on the western side of the main rock formation, the right side as seen from the front.

Round hill in TOS: "Shore Leave"

Round hill in TOS: "Arena"

Round hill in TOS: "The Alternative Factor"

Round hill in TNG: "Who Watches the Watchers"

The "western fort" of Cestus III from TOS: "Arena" was located directly at Vasquez Rocks, but was shot in a fashion not to reveal the prominent rocks in the background. It is possible that the wrinkled metal sheet on the top of the wide-angle shot was deliberately used to obscure the rocks.

For the remastered episode, this piece of metal was digitally replaced with a panoramic view and sky.

Besides the already mentioned shot of the front side later in the movie, Vasquez Rocks is also visible behind the city at the time of Spock's childhood in "Star Trek (2009)". It is not conclusive which part of the rock formation is visible here (perhaps the rear side?). It appears to have been heavily digitally altered and is not the same as the one behind Amanda's and Sarek's residence.

View of indefinite rocks on Ni'Var in DIS: "All Is Possible"

The first shot of the rocks to appear on Ni'Var (formerly Vulcan) in DIS: "All Is Possible" is indefinite and essentially just shows a rock formation reminiscent of Vasquez Rocks. The shapes and orientations of the rocks are roughly the same as in "Star Trek (2009)", insinuating it is the same city.

Vasquez Rocks shows up in animated form on Tulgana IV in LOW: "Envoys". Here, many slanted rock formations can be seen in a park. In LOW: "Veritas", Ensign Rutherford wakes up amidst a Gorn wedding on an alien planet with a scenery that evokes Vasquez Rocks.

Vasquez Rocks in In LOW: "Veritas"

More on a side note, Vasquez Rocks also shows up in the Futurama episode "Where No Fan Has Gone Before" (the Star Trek homage with almost all voices of the TOS cast).

A photo of Vasquez Rocks is used to represent Sherman's Planet in the Decipher Star Trek CCG, but this is non-canon as the surface of that planet was never on screen.

Most screen caps from TrekCore. The scan from Star Trek: TNG 365 comes from Memory Alpha. Thanks to Matthew Callis, who pointed out the Decipher card game to us.