Many props of Star Trek were later modified or even recycled without changes to represent equipment for a different purpose or of another civilization. Here are quite a few examples of various weapons. Please note that every statement made here should be taken with a grain of salt. There is no need to seek for explanations. Certainly we are not supposed to watch closely enough to notice that distant civilizations have the same weapons.

The Tkon halberd is later seen again as a Klingon weapon in "Sins of the Father" in K'mpec's office and on Boreth in "Rightful Heir". 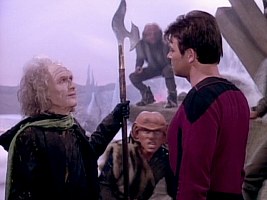 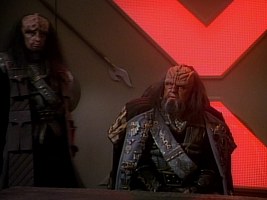 Klingon halberd in TNG: "Sins of the Father" 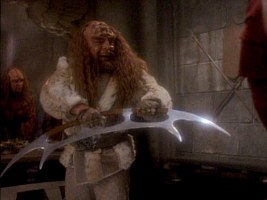 The knife of the Tamarian captain Dathon featured in TNG: "Darmok" reappears in TNG: "Man of the People" when the aged Deanna, under the influence of Ambassador Alkar, attacks Picard with it.

Deanna's knife in TNG: "Man of the People"

In DS9: "To the Death" the Jem'Hadar had blade weapons resembling medieval halberds. We can see this prop again in DS9: "Ties of Blood and Water", this time, in Kira's flashback about the Cardassian occupation, as a Bajoran weapon.

Jem'Hadar blade weapon in DS9: "To the Death"

Bajoran weapon in DS9: "Ties of Blood and Water"

One of the typical Ligonian weapons in TNG: "Code of Honor" was a poisoned needle glove called glavin. The same prop can be seen in Worf's quarters in TNG: "Reunion" (when Worf shows his armory to Alexander), this time apparently representing a genuinely Klingon weapon. On the other hand, he may have been so impressed with the Ligonians that he took it as a souvenir or to honor his commanding officer Lt. Yar who may have fought with exactly this glavin.

In TOS: "Mirror, Mirror" small triangular agonizers served to punish the crew for offenses. The same devices were used by the Klingons of our universe in TOS: "Day of the Dove".

Klingon agonizer in TOS: "Day of the Dove"

The Tantalus generator from TOS: "Mirror, Mirror" reappeared in a quite peaceful incarnation as a console in Dr. McCoy's sickbay in TOS: "Journey to Babel".

The central part of the equipment that Garak used to forcibly keep Odo in his solid form in DS9: "The Die is Cast" reappeared as a more peaceful protein sequencer in DS9: "The Quickening".

Shapeshifting inhibitor in DS9: "The Die is Cast"

Protein sequencer in DS9: "The Quickening"

The Cardassian forcefield generators in DS9: "The Homecoming" are used by the Paradans in DS9: "Whispers" for a completely different purpose: as structural reinforcements of their cave.

Field generator in DS9: "The Homecoming"

The lighted part of the prison forcefield on the Mokra homeworld (VOY: "Resistance") was redressed to become the Ilari forcefield generators (VOY: "Warlord").

The Ansata bomb from TNG: "The High Ground" appeared as another bomb many years later, in the Voyager episode "Time and Again". It could then be seen as a spatial charge in VOY: "Dark Frontier" and as a plasma charge in VOY: "Collective". 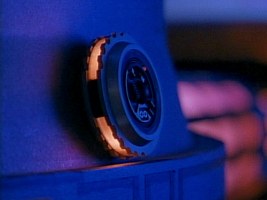 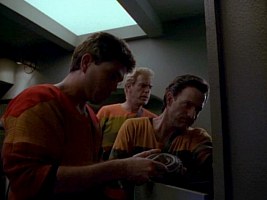 Bomb in VOY: "Time and Again"

The mine from ENT: "Minefield" has a comeback in ENT: "Zero Hour" as the Xindi reactor core. The frame around the core previously appeared as the Tucker's gyroscope device in ENT: "Vanishing Point".

Romulan mine in ENT: "Minefield"

Some screen caps from TrekCore. Thanks to Michael Minnick for spotting the Jem'Hadar halberd and the Romulan mine, to Jernej L. who noticed the re-uses of the Tamarian knife and the Ligonian glove and to Phoenix Merrick for a hint about the Ligonian glove.