Animals with changing faces - by Jörg Hillebrand and Bernd Schneider

Felis catus is your taxonomic nomenclature,
an endothermic quadruped, carnivorous by nature.
Your visual, olfactory, and auditory senses,
contribute to your hunting skills, and natural defenses.

I find myself intrigued, by your subvocal oscillations,
a singular development of cat communications,
that obviates your basic hedonistic predilection,
for a rhythmic stroking of your fur, to demonstrate affection.

A tail is quite essential, for your acrobatic talents.
You would not be so agile, if you lacked its counterbalance,
and when not being utilized to aid in locomotion,
it often serves to illustrate, the state of your emotion.

Oh Spot, the complex levels of behavior you display,
connote a fairly well developed cognitive array,
and though you are not sentient, Spot, and do not comprehend,
I nonetheless consider you, a true, and valued, friend.

Spot, Data's cat, first appears in TNG: "Data's Day" (fourth season) as a long-haired Somali cat. Spot is male (although we would need to observe very closely) and is referred to as "he". The Somali cat can be seen as Spot one more time in "In Theory". 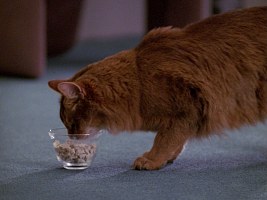 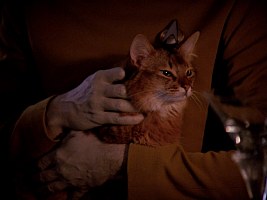 Spot as Somali cat in TNG: "In Theory"

Since TNG: "A Fistful of Datas" (sixth season) Spot is seen on several occasions as an American shorthair, with a brighter basic color than the Somali cat, and noticeably different due to the hair length and pattern. Moreover, in "Force of Nature" the cat is referred to as "she". 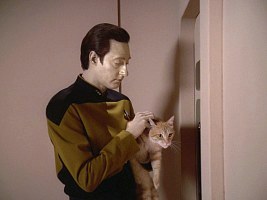 Spot as shorthair cat in TNG: "A Fistful of Datas"

Spot as shorthair cat in TNG: "Birthright I" 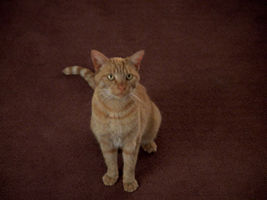 Spot as shorthair cat in TNG: "Force of Nature"

In the episode TNG: "Genesis" Spot even gives birth to kittens, just prior to a temporary mutation to an iguana. The fact that the kittens are not affected by the genetic mutation is the key to finding a cure for the condition.

Spot as igunana in TNG: "Genesis"

So what happens to the first Spot? Rather than making up weird theories we should simply assume that at some time during TNG the male Spot 1 was killed in an accident and Data replaced him with the female Spot 2.

An artificially created cat named Spot II appears in PIC: "Et in Arcadia Ego I". This too is a shorthair cat. 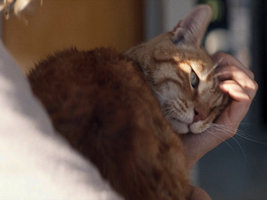 Spot II in PIC: "Et in Arcadia Ego I" 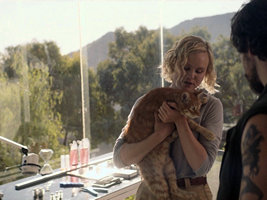 Spot II in PIC: "Et in Arcadia Ego I"

The Star Trek Encyclopedia describes the lonely exotic fish in Picard's ready room, named for TNG and DS9 producer David Livingston, as an Australian lionfish. There are several species of lionfish, more precisely in the genus of pterois, and on close-ups it becomes apparent that Livingston must be a red lionfish (pterois volitans). The red lionfish is overall ochre with dark brown stripes. The fins and spikes are partially fasciated. Beginning with TNG: "Encounter at Farpoint" Livingston appears a couple of times in almost all seasons of TNG until "Bloodlines" in the seventh season, and the species remains consistent.

Livingston as red lionfish in TNG: "Encounter at Farpoint"

Livingston as red lionfish in TNG: "We'll Always Have Paris"

Livingston as red lionfish in TNG: "A Matter of Time" 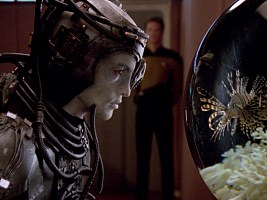 Livingston as red lionfish in TNG: "I, Borg" 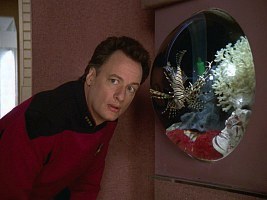 There is only one clearly visible exception, ironically in the episode that shows the best close-up of the fish tank. In TNG: "Devil's Due" (fourth season) Livingston is a radial firefish (pterois radiata), another species of lionfish. This species (which is rather red than the so named lionfish) is overall darker and more colorful and is lacking the characteristic stripes, especially on the fins. It seems that after not appearing for two years the old Livingston was not available any longer by the fourth season (although the lifespan of the species is more than ten years) and a stand-in was needed. By the fifth season the Art Department may have found another member of the correct species. 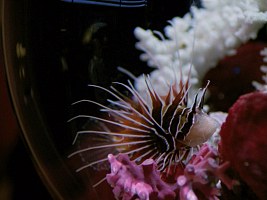 Livingston as radial firefish in TNG: "Devil's Due"

Like Spot and like everyone else on board, Livingston fell victim to the retro virus and mutated in TNG: "Genesis". We can see the protohumanoid that was Riker snatch at some sort of jellyfish in the aquarium while there is no sign of Livingston as we know him. Curiously, apparently the same jellyfish will reappear in VOY: "Hope and Fear".

Livingston as jellyfish in TNG: "Genesis"

Jellyfish in VOY: "Hope and Fear"

Thanks a lot to Josh Wilder for the bit about Livingston in TNG: "Genesis".