Changes to the TNG Sets Between Seasons 1 and 2

It is quite common in TV series of any genre that the sets receive an overhaul, are extended or slightly redesigned between two seasons. The most obvious redesign of the TNG sets and hence of the interior of the Enterprise-D occurred between the seasons 1 and 2. The Ten Forward set was newly created, and several other sets were at least slightly redesigned.

Several parts of the bridge were modified between season 1 and season 2.

Some small changes were made to the ready room between seasons.

In season 1, the observation lounge was a redress of sickbay. Whenever the set was turned into the lounge, the gray fabric covering the windows was removed and the wooden wall with the Enterprise models was erected roughly in the middle of sickbay. The circular roof structure above the central biobed was intersected roughly in half by the wooden wall with the ship models. In addition, the biobeds were removed and replaced by the large conference table and the eight chairs. Also, paintings were hung on the short port and starboard walls.

When a new set for the observation lounge was built between seasons 1 and 2, sickbay no longer needed to be redressed as the lounge.

The changes to the transporter room between season 1 and season 2 were relatively minor.

Modifications were made to several portions of the main engineering set between season 1 and season 2.

Floorplan of the short corridor set 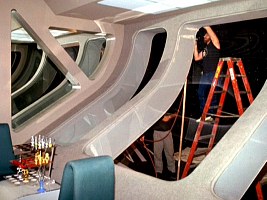 The stage layout comes from Star Trek Stages History. Thanks to J. L. Garner for the hint about the isolinear chip ports in the ops and conn consoles.