Redresses of the Akritirian Patrol Ship

The Akritirian patrol ship from VOY: "The Chute" became one of the most "popular" computer-generated ship models, as it reappeared no less than eight times in Voyager and Enterprise episodes:

The original version of the CGI appears in VOY: "The Chute". The ship is overall gray, with some contrasting green and some red areas. The ship is correctly reproduced in the Star Trek Fact Files, where it looks like renditions of the actual CGI are depicted. Unlike some of the later variants the Akritirian ship sports several rows of windows in the forward half of the central hull. The scale of the windows or the way the whole ship was scaled relative to Voyager is wrong, as the Akritirian vessel looks like it should be bigger than the Federation ship but seems to be at most 200m long in the episode, more like 150m.

Akritirian patrol ship, side in VOY: "The Chute" 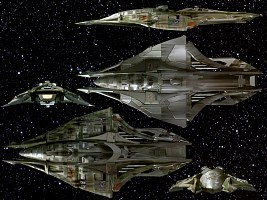 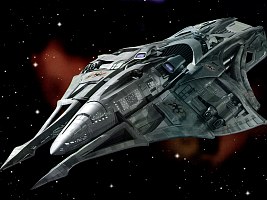 The Akritirian emblem (which is also visible behind an Akritiri government official in the same episode) can be found six times on the ship: two times on the upper surface on either side of the window rows, two smaller emblems behind the central section and two more on the underside. On the very top of the vessel there are two angular tubes shining blue at their front ends. One more is located on the ventral side. The ship's apparently only (impulse) engine can be found at the very rear end on the ventral side, partially concealed by the upper hull. Its glow is yellow.

The Ba'neth ship is hard to recognize in VOY: "Riddles" because a bluish cloaking field obscures its hull shape and color. It is well possible that the model, without this additional effect, is still exactly the same that was previously seen as the Akritirian vessel. The window rows are identical in any case, and what is visible of the lighting looks the same too. Yet, we get the impression that at least the Akritirian logo was removed. The depiction of the Ba'neth ship in the Fact Files is absolutely identical to the Akritirian patrol ship, but this may be a simple matter of miscommunication because whoever created the images for the magazine may have been told that the same model was used.

In VOY: "Drive" the model of the Akritirian patrol ship, like many other CGIs of large ships too, was drastically scaled down to act as a racing shuttle. The model is identical to the Akritirian version, even the emblems are the same. See also Analysis of the Antarian Transstellar Rally.

The patrol ship is the first of two slightly different Lokirrim vessels that were created for VOY: "Body and Soul", both closely based on the Akritirian patrol ship. Their look is accurately reproduced in the Star Trek Fact Files. For the Lokirrim vessels the hull color was changed to ochre, with brown and red areas. Some details like the tubes on the dorsal sides of the wings are still gray though. The lighting of the engines (yellow) and of the three pods (blue) is still the same as on the Akritirian ship. The Lokirrim version, however, has two additional yellow areas (engines) on the dorsal surface, at the rear ends of the wings. The Akritirian emblems were removed in the course of the reconfiguration.

Lokirrim patrol ship, side in VOY: "Body and Soul" 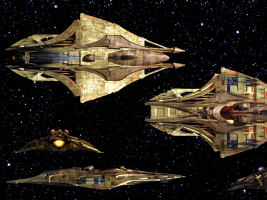 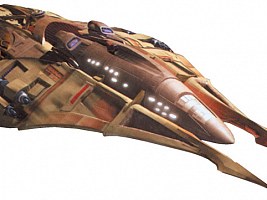 The most important alteration is that the many small windows of the Akritirian ship were replaced with just two rows of considerably larger windows which let the Lokirrim variant look much smaller. This time, with the Lokirrim ship appearing to be only some 180m long, the scale relative to Voyager works out much better.

The Lokirrim warship is obviously based upon the patrol ship of the same race, and indirectly derived from the original Akritirian CGI. Hence, everything said about the Lokirrim patrol ship applies to warship just as well. The hull colors and window rows are identical. The only slight difference is that there is a faint green glow on the warship. But more importantly, the hull of the warship was altered to look more menacing. It features two more of the rectangular tubes on the ventral side, located on the two wings. On the ventral side we can find three of these pods instead of just one. The number of the gray tubes on the wings was doubled, there are four of them on each wing instead of previously two. Moreover, there are completely new wing extensions holding an additional two tubes per wing. 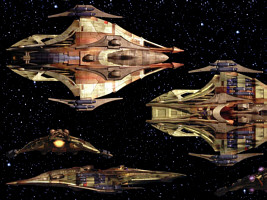 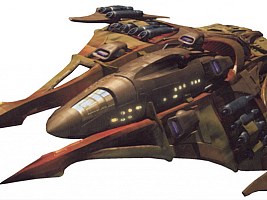 The Ledosian patrol ship in VOY: "Natural Law" is an odd variant because the CGI of the Akritirian vessel was combined with a custom hull in a way that only the forked forward end is sticking out. The Akritirian hull part is gray, and the pods which were previously always blue are now illuminated red. It also looks like additional antennae were mounted to the fore end. 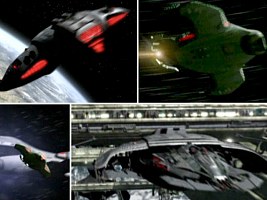 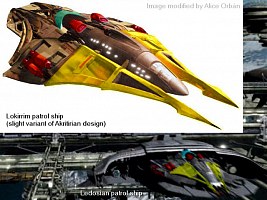 Curiously there is another ship at the Ledosian space port (not necessarily a Ledosian vessel), which turns out to be a completely unchanged Akritirian vessel.

The CGI that appeared as Kriosian battlecruiser in ENT: "Precious Cargo" is essentially the original Akritirian version again. Only the hull color was changed. The overall hue is a bit more ochre, and there are several intense blue hull panels instead of the red and green areas. The pods still shine blue, and the engine color is orange. The big Akritirian emblem on the forward dorsal hull was removed, but whoever made the modifications forgot about the smaller version in the rear half which is still there, just as well as the one on the bottom.

Unfortunately the window arrangement is the same as on the Akritirian version. With its many window rows we would expect the Kriosian battlecruiser to be a lot bigger than the NX class. But when docked to Enterprise the vessel is only some 200m long. The scaling is particularly bad when we look at Enterprise's E-deck which seems to be as thick as three window rows on the Kriosian vessel.

The CGI showed up one last time as the pirate cruiser in ENT: "Horizon". The color of this cruiser is plain gray, apparently without any contrasting panels. The basic hull shape is the same as originally. Still, this final variant shows the most extensive modifications. The windows were altered once again. The arrangement looks a bit like on the Lokirrim ships, only that the red glowing raised structures don't look like windows any more. Most obviously additional pods were attached to the wing tips, unlike the extra structures on the Lokirrim warship. There is a new cylindrical structure on either side of the forked bow. There are tubes or ribs in the previously flush deepened area on the upper side of the fork tins. A similar change was made on the rear end behind the engines. It looks a bit like the whole CGI has been overall refined.

There are three faint yellow lights inside the pods instead of the blue one. The upper engines (like on the Lokirrim ships) and the lower engine are still yellow.

Addendum: Origin of the model in seaQuest DSV

The probable origin of the Akritirian ship design lies is an automated submarine that appeared in the 2nd season episode "The Sincerest Form of Flattery" of seaQuest DSV (first air date: 13 November 1994). The CG effects of that series were created by Amblin Imaging, later reopened as Digital Muse. Digital Muse was also responsible for the effects of Star Trek Voyager, and "The Chute" (air date: 18 September 1996) was the first episode they worked on. So it appears that reusing the submarine from the seaQust episode was a way for them to get started quickly.

Submarine in seaQuest: "The Sincerest Form of Flattery"

Daedalus in "The Osiris Chronicles"

Addendum: Inspiration for a ship in The Osiris Chronicles

"The Warlord: Battle for the Galaxy" (also known as "The Osiris Chronicles") is a science fiction film from 1998. The film relies on physical models, but we can see that one of its ship designs, the Daedalus, is obviously inspired by the CG model of the Akritirian ship. The ship model, as well as several costumes and props were in the inventory of the Star Trek Art Department and were auctioned in 2008.

John Eaves designed all the ships from seaQuest, Star Trek Voyager and "The Osiris Chronicles". He tells us: "Yes - those are all the same ship re-imagined and you also caught the third variation of this design from The Osiris Chronicles. Dan Curry saw this seaQuest design and liked it a lot and asked for a revamp for Voyager. For Osiris I always wanted to make a longer version of this one and the show allowed for that to happen. This idea is so out of my system that you will probably never see another variation on it, HAAA!!!"

This table summarizes all the Star Trek variants and appearances of the ship model: