A joint project with Pedro's Shiporama and SciFi Art

The first appearance of an Ambassador-class starship, namely the Enterprise-C, was in the form of a relief on the "history wall" in the Enterprise-D's observation lounge in the first TNG season. Although this half-model did not exhibit many details, we can clearly see that it had an almond-shaped engineering hull akin to the Galaxy-class Enterprise-D, as opposed to the later tubular hull of the Ambassador. Production designer Andrew Probert also created a painting of this early version. It is depicted in The Art of Star Trek and could be found on his website. The book erroneously describes this painting as an early design stage of the Enterprise-D. Probert, however, states that this design was supposed to represent another ship the Enterprise-D was to meet with and that he intentionally "laid out its lines to fit between those of the 'B' Enterprise and our 'D' ship so that it would feel like a logical design progression". Had it been built at the beginning of TNG, it would have been a regular "guest ship", but it was decided to use Excelsiors, Oberths and Mirandas instead, probably to save costs.

Considering that we saw the actual Enterprise-C in TNG: "Yesterday's Enterprise", it is open to speculation what we can make of the early version on the ship wall. It is the look of the Enterprise-C's class as intended by Andrew Probert, but the painting was never shown on screen, and none of the other models on the "history wall" is very precise either. In this light we may decide that the Enterprise-C relief could be an artistic rendition intentionally or accidentally falsifying the ship's real look. The same obviously applies to the Enterprise-B, which was shown as late as in "Star Trek: Generations", but now with additional hull extensions compared to the standard Excelsior on the wall. On the other hand, it is well possible that the pre-production version of the Ambassador does exist, and the artist who made the ship wall mistakenly depicted the Enterprise-C as such an Ambassador variant. Alternatively, the Enterprise-C may have started her life as Probert's design, only to be rebuilt to the configuration of "Yesterday's Enterprise". The Excelsior-class ship on the wall, on the other hand, definitely doesn't depict the launch configuration of the Enterprise-B.

Apart from the early version, there are two variants of the Ambassador class. The first one was designed by Rick Sternbach and built by Greg Jein to represent the aforementioned USS Enterprise NCC-1701-C in TNG: "Yesterday's Enterprise". Her design deviates from the relief on the wall in that the engineering hull is now tubular and the warp pylons are straight instead of angled. The second one was used for the USS Zhukov (TNG: "Data's Day"), USS Excalibur (TNG: "Redemption II") and USS Yamaguchi (DS9: "Emissary").

For many years, it was assumed that there was only one physical studio miniature of the Ambassador class that was used for the all the above appearances and that was heavily modified after "Yesterday's Enterprise" when presumably not only the battle damage was painted over but also hull modifications took place. This never happened. Actually, a second model was built, one that appeared as Zhukov, Excalibur and Yamaguchi. The original Enterprise-C studio model still exists, complete with the painted on battle damage!

Our article spotlights the differences between the two models on photos of the studio miniature and on the CG models created by Pedro and Tachy of SciFi Art.

The two different models are subsequently referred to as "Enterprise-C" and "Yamaguchi". We implicitly assume that the latter is the newer one, although Greg Jein may have built them at the same time and saved the latter for later. Looking at the two studio models, there are ten major and a few minor differences:

Enterprise-C: bridge module with many lifeboats (image by Greg Jein)

Yamaguchi: bridge module with only 2 lifeboats (image by Bill George)

The Enterprise-C has a clear round sensor dome directly underneath the saucer hull, while the Yamaguchi's sensor dome is located underneath an additional platform. This platform is similar to the Excelsior's, with rectangular extensions pointing in six directions, separated by angles of 60°.

The Enterprise-C has a main deflector akin to the Constitution refit, showing the reddish color of the resin with 16 radial white/gray lines. The dish shines bluish when the model is lighted. The Yamaguchi's deflector dish is painted mid blue, and has an additional rust red or orange center part.

The Enterprice-C's neck is sticking out roughly 6 meters behind the backward saucer rim, while the Yamaguchi's neck is recessed by about 6m. The neck part and its location on the engineering hull appears to be the same for both models, so the complete saucer was moved about 12m backward for the Yamaguchi.

The distance between the nacelle front tips and the saucer is roughly the same for both models, maybe only a bit closer for the Yamaguchi. It seems the forward shift of the secondary hull (see 4.) is (partially) compensated by moving the nacelles of the Yamaguchi back, away from the saucer rim. This is corroborated by the bottom view of the ship, which shows that the pylons are closer to the forward end of the "bulge" on the nacelle bottom. Therefore the overall length of about 526m according to the Star Trek Encyclopedia II remains about the same also for the Yamaguchi version, or the ship is only insignificantly shorter. Our renderings assume the two ships are of the same length. 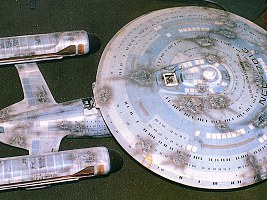 The Bussard collector was covered with an upper and lower cap for the Yamaguchi version.

The Enterprise-C has two shuttlebays - one on deck 3 and one astern. The Yamaguchi has what looks like an additional underslung shuttlebay beneath the engineering hull undercut. It resembles an Excelsior shuttlebay turned upside down.

The Enterprise-C's engineering hull top side is strongly conical, narrowing at the rear end to only one third of its front end width. The Yamaguchi's engineering hull is much less conical and therefore considerably wider at its read end. This is one reason why the platform around the Enterprise-C appears to be much wider than that of the Yamaguchi. Still, it looks as if the shape of the platform is different too, along with the 2 x 4 raised panels on the nacelle struts on each side which are further away from the ship's centerline on the Yamaguchi.

A difference that can be identified in VFX shots rather than on photos of the studio miniatures is the color of the impulse engines. The plasma glows blue on the Enterprise-C, while it has the usual red, LED-like look on the Yamaguchi.

In addition to the already mentioned relocation of the nacelles (5.) relative to the first model, the pylons were shortened at some later time, thereby lowering the nacelles. They are now below the saucer in their entirety and in a similar position as on the Galaxy class. This is the only change we have identified that must have happened on the Yamaguchi model after it had appeared as Zhukov and Excalibur. Actually, it seems that the rear view of the Yamaguchi as seen above was made during the rebuilding, with the port pylon already cut down, while the starboard one still has its original height, hence the imbalance of the nacelle positions! It appears that this final pylon modification took place after the Yamaguchi had already been shot for DS9: "Emissary" and was being prepared for a possible appearance in "Generations". Most likely the variant with the short nacelles was never visible on screen. In any case, this modification is not taken into account in our 3D reconstruction. 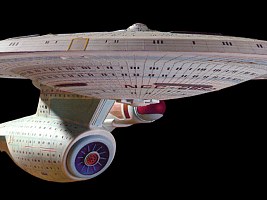 There are a few minor differences between the models, for instance additional transporter emitter pads behind the bridge module and emitter pads and lifeboats on the pylons on either side of the engineering hull.

Reasons for the second model

We can only speculate why the Enterprise-C model was never re-used after its appearance in "Yesterday's Enterprise". The damage patterns on the hull were only painted on, so it may have sufficed to repaint the model to restore its undamaged look. However, as already mentioned, Greg Jein often built more than one model of each ship or produced resin castings, so it is well possible that the decision to use a second model was made easy.

The Zhukov looks essentially identical to the Yamaguchi, except for the hull markings. The name, however, should read "Zhukov" instead of "Zuhkov". The hull number "NCC-62136" is another mistake. It doesn't fit into the normal range of Ambassador-class registries. On a ship status display in TNG: "Brothers" the Zhukov was listed as a Rigel-class ship, still with the registry "NCC-62136". The registry was changed to "NCC-26136" for a later status display. 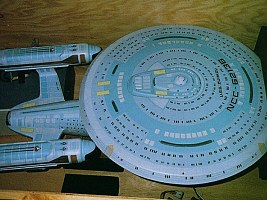 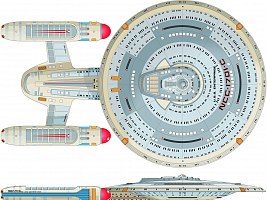 Subsequent damage to the Yamaguchi model

The Yamaguchi studio miniature was supposed to be displayed on Star Trek: The Exhibition in Mosley, Ireland, in 1994. The model, however, arrived with substantial damage to the internal lighting, the saucer and the nacelle pylons. As it was not deemed possible to fix it for the exhibition, the model was left as it was and sent back to Paramount Pictures. This damage happened after the model was last seen on screen. It may explain the lower nacelles and perhaps some other modifications to the Yamaguchi as it appeared on exhibitions.

The above diagrams were created with Adobe Illustrator by Mike Swantak, and thanks to our research they are far more precise than the renditions in the Star Trek Encyclopedia II. Pedro and Tachy of SciFi Art have created excellent models of both Ambassador variants. Click the image maps below to see the orthographic views.

Thanks to Mike Trice for permission to use his USS Yamaguchi pictures. Special thanks to Pedro and Tachy for advice and for their stunning 3D Ambassador. Thanks also to J. Wilder for spotting a possible reason why the saucer was moved, to James Maple and T. Levang, who found the shortened pylons on the latest Ambassador version, and to Robert Minnes for suggesting that this version was never on screen. Thanks to Anson for the information about the subsequent damage to the model. Special thanks to Search4 (TrekBBS) and Dukhat (Flare Forums) for clarifying that there were indeed two different studio models, after 25 years of speculation.