The only confirmed appearance of a Cheyenne-class starship was the USS Ahwahnee in the Wolf 359 "graveyard" (TNG: "Best of Both Worlds II"). The model was built by Ed Miarecki, and unlike other ships for the graveyard it was not damaged for this purpose. Hence, it was not possible to include it except for the far background, just to show that there is another ship, intact or not.

This article identifies the USS Ahwahnee in the scenes from TNG: "Best of Both Worlds II" and reconstructs how the model was built.

For a long time, the only available depiction of Ahwahnee model was on a card of the Behind the Scenes Card Game. Here, the ship has the registry NCC-73620. The tachyon web fleet in TNG: "Redemption" features a Cheyenne-class Ahwahnee too, however, this time with the registry NCC-71620. The model was not visible on screen in the latter episode, and there is no clue whether it could be the one salvaged ship from Wolf 359, or rather a newly commissioned vessel. It seems that the intention was to insinuate the first, only the registry underwent an accidental permutation.

The image from the Behind the Scenes Card Game was the only known reference for the Cheyenne class until a new photo together with the Springfield class became available.

The TNG DVD set allows the identification of the Cheyenne-class USS Ahwahnee on screen in TNG: "Best of Both Worlds II" with a high probability. The ship appears on the Enterprise viewscreen in the upper right corner, just far enough away that it isn't noticeable that the ship has remained undamaged. 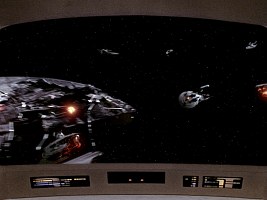 Two four-nacelled vessels can be seen in the Qualor II surplus depot in TNG: "Unification I", but they look different from the Cheyenne class. Both of them are four-nacelled Excelsior study models.

According to the studio model image, the Cheyenne class is a kitbashed design. The saucer bottom from the small 1/2500 AMT/Ertl Enterprise-D kit including the neck is used as the saucer top. It is obvious that, for the sake of simplicity, the modeler probably used the same parts for the hidden saucer bottom and neck, so it can be supposed that the model is vertically symmetrical. In order to suggest the Cheyenne class is much smaller than the Galaxy class, larger windows and lifeboats were added. The bridge module is comparatively large and is obviously taken from the large 1/1400 Enterprise-D. The same goes for the impulse engines. In order to make the larger impulse engines fit, the saucer rear end is indented. The four warp nacelles are actually Schwan-Stabilo highlighters, their rear end cut off, as indicated by the white line on the picture with the parts. NeghVar has done his own reconstruction, independently of my considerations, and his image is very similar to what I believe the Cheyenne looks like.

Unfortunately, the viewing angles on the reference photos do not reveal the curvature of the nacelle pylons. There used to be three theories how the pylons may actually bend:

Solution of the pylon problem
(image by Bernd)

It is necessary to further examine the Cheyenne-class image to reconstruct its actual appearance. I have redrawn the nacelles (yellow) and connected their corresponding points (green). All green lines are either parallel or perpendicular. The curvatures and sizes of the staggered starboard pylons (orange) are very similar, which would not be possible if the lower one bent downwards. So most part of the pylons is either all bent upwards or horizontal. At the first look, the curvature radius of the lower starboard pylon is even smaller, so it looks as if it runs upwards in an even steeper angle. However, this may have another reason, as I will point out later.

I found some apparent inconsistencies when I further studied the image. The lower starboard pylon is connected to the nacelle in the middle of the compression rings. Extrapolating the corresponding upper starboard pylon which is partially hidden by the nacelle, it seems this one is shifted to the forward end of the nacelle, unlike the upper port pylon. However, it is obvious that the ship must have symmetrical port and starboard halves. The solution is to assume that the curvature of the upper pylon changes its radius or direction. Note the additional fold (upward) in this pylon, which must be hidden behind the nacelle (white arrow). The invisible lower port pylon, on the other hand, needs a fold downward to meet the nacelle in the correct location (white arrow). Again, it is necessary for the pylons to match one another, so we can assume that the same applies to the lower starboard pylon. This could be why it looks different than its upper counterpart. We could assume that the ship was damaged and the nacelles have been fixed only to take a photo of the ship (which would make all my efforts useless), but it is highly improbable that both the upper starboard and lower port nacelle were fixed in the same wrong position.

Next, we have a look at the nacelle centerline (cyan). It seems that it runs exactly through the connection plane between the upper and lower halves of the saucer. This is one more sign that the entire ship has symmetrical upper and lower halves. It is also obvious that such a model would be easy to build, since the Galaxy-class neck can be employed for the lower half likewise. The plane formed by the connected nacelle tips seems to be located a few millimeters behind the impulse engines, so there is no overlap of nacelles and saucer hull. With this information, it is possible to sketch up a largely faithful side and top view. 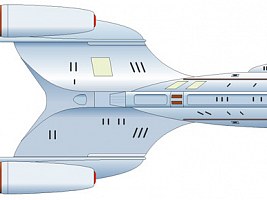 Final side view
(image by Bernd)

In 2015 and 2016, Rick Sternbach managed to dig up several more photos of the various ships built by Ed Miarecki and used for the Wolf 359 shoots, all taken before the models were damaged (the Cheyenne-class Ahwahnee was never damaged though). The new pictures of the Cheyenne class confirm my reconstruction of the ship's nacelle pylons.

The upper nacelle pylons of the Cheyenne class are mainly horizontal, only the very tips are folded a bit upward. Given the above considerations and assuming a symmetrical ship, the lower nacelles also run horizontal and then bend downwards, as can be seen in the final side view. The top view clearly shows the 1/1400 bridge module and impulse engines. As already mentioned, part of the saucer rear end had to be removed in order to make the impulse engine fit. The distance between the saucer halves probably had to be extended by a few millimeters (with a simple polystyrene strip), since the 1/1400 impulse engines are 5mm high. The shuttlebay is most likely located where the two necks meet, while the ship does not seem to have a deflector dish.

Given the known size of the Galaxy-class bridge module, the Cheyenne class is 362m long and 262m wide. Note that the saucer is probably wider than that of the "sister ship" New Orleans. The deck count is no reliable reference in this case, since, apart from the bridge module, only two decks can be distinguished by their windows. These decks seem to have a height of much more than 4m each, provided the bridge module has two decks with the usual 3.5m height. The Cheyenne-class escape pods being simple rectangles, they are not necessarily the same size as those of the Galaxy, so they may not serve as a useful reference.

My thanks go to Hobbes, NeghVar, Pedro, Alexander DeLarge and The Red Admiral for some of the images. I also wish to thank E bear, The Vorlon, The359, TSN, Shipbuilder, Identity Crisis, Frank G, The First One, AndrewR, The_Tom and Michael_T for their fruitful discussion at the SFCR that helped me to reconstruct the Cheyenne class. Special thanks to Masaki for the illustration of the structural analysis. Big thanks also to Rick Sternbach!