Redresses of the Mondor

The miniature of the Pakled ship Mondor could be seen frequently in TNG and once in DS9, each time representing low-tech visitor ships. These are the appearances in chronological order:

Based on the existing screen evidence we presume that no physical alterations were made to the studio miniature. All details, including the asymmetrically arranged tubes, obviously remained the same. There were quite a few changes to the color scheme and the lighting though.

The Mondor's basic color is beige with many colorful details, such as red stripes all across the hull and yellow and green rings on the long starboard tube. Newer photos show that the paint is darker than it appears on a photo in Star Trek TNG: The Continuing Mission that was apparently shot with very bright lighting. The caption in the book tells us that Kivas Fajo's ship Jovis is depicted, but without a doubt it actually shows the Mondor. Comparing the photo in the book to the actual appearance of the Mondor on screen we can observe that the intensely green rings on both ends of the larger tube are missing on the photo. The photo most likely shows the miniature partially repainted at a later stage of its career. 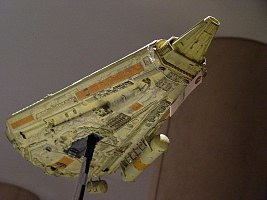 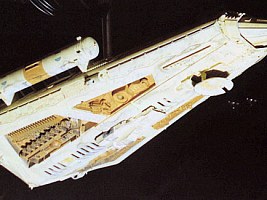 We get an impression of the size of the Mondor when the ship becomes visible in front of the saucer section of the Enterprise-D. The Pakled ship must be less than 150m long, possibly barely more than 100m. 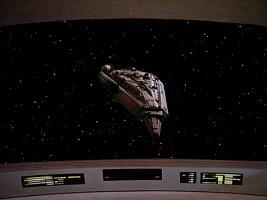 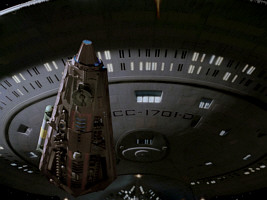 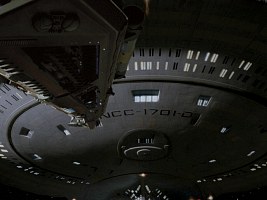 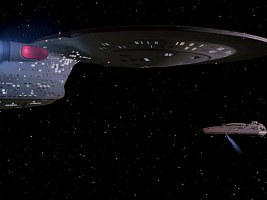 The Gatherer ship from TNG: "The Vengeance Factor" was created using mainly stock footage of the Mondor. But a certain distinctiveness comes from the different color, as the Gatherer ship is now bluish gray and overall darker. This was probably done in post-processing, as we can see the brighter beige and the darker gray version almost in an alternating fashion, and it is unlikely that the whole hull was repainted each time. A purple light effect of a beam weapon was inserted into a scene too. We can see that, aside from the beam, the two forward dorsal views of the approaching ships are identical. There is one new take of the Acamarian ship, but here it is shown upside down. This observation is overruled by the rest of the episode where the orientation is always the same as of the Pakled vessel. These two vessels are of the same size and might be the same design regardless of the different colors. 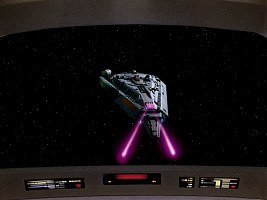 Acamarian ship, upside down in TNG: "The Vengeance Factor"

The vessel was briefly visible in TNG: "The Wounded", chased by the USS Phoenix. The take with the supply ship is obviously new (we haven't seen the model from this angle yet). Moreover, the color is yellowish or ochre. This is close to the tint of the Mondor again, only somewhat darker to match better with the new Cardassian Galor-class ship that shows up for the first time in the same episode. If the miniature of the Mondor has retained its original color, the adaptation in the post-processing is easy. We can also see that the green end caps of the long tube on the starboard side are missing. At least these may have been repainted, and this matches with the photo from Star Trek TNG: The Continuing Mission. Still, once again there are no physical changes to the model, and the Cardassian freighter could be easily the same design as the Mondor (if only the Cardassians didn't have that many low-tech freighter designs). 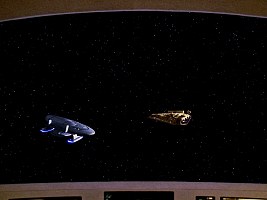 The brief take from TNG: "The Host" with the ship of the TNG Trills (which is listed as a different race than the DS9 Trills, reasons in this article) is entirely stock footage of the Mondor from TNG: "Samaritan Snare" without any modification. Therefore these two vessels are supposed to be of the same size and design.

A new take was filmed for this episode. The color of the vessel (whose miniature is probably still beige) was switched to a bluish gray tone again, maybe somewhat darker than on the Acamarian vessel. A further distinctive feature is the bright greenish glow on both sides of the main hull, where the engines are probably meant be located on this particular vessel. The Satarran infiltrator, "Kieran McDuff", was probably the only crew member, as he destroyed the ship. Perhaps we can and are supposed to assume that the Satarran is a much smaller ship than any of the other Mondor incarnations.

This ship in TNG: "The Cost of Living" is another case of stock footage, this time of the Acamarian Gatherer ship from TNG: "The Vengeance Factor". No color change was made.

The last time we can see the Mondor model in DS9: "Vortex" as a Rigelian freighter. The overall hull color is much the same, if not exactly the same as it was originally on the Mondor. The state of the model seems to be the same as on the photo in Star Trek TNG: The Continuing Mission, here much more clearly visible than on the above Cardassian version. Only small dissimilarities to the original Mondor can be found on the model itself. There is a second red stripe on the port side of the Rigelian ship, running astern. This stripe is missing on the port side of the Mondor, and the other stripes on the Mondor may be brighter. In addition, the central red stripe on the ventral side of the Mondor is not on the later versions.

The most significant difference, however, to any of the other Mondor variations was probably done electronically once again. The Rigelian vessel is meant to be relatively large so that it could serve as a cover for a runabout. Evidently the freighter is more than ten times as long as a Danube class, putting it at 250m. This impression is emphasized by the many additionally inserted window rows on the Rigelian ship, each indicating one deck. It is only a coarse estimate, but with 3m per deck we arrive at around 250m too. On the other hand, the ship is barely one eighth of the diameter of Deep Space 9, yet we also know that the station is inconsequently scaled to 1600m at times, so 250m would not be too far off. In this light it is only unfortunate that the model retained the two typical tubes of the Mondor. 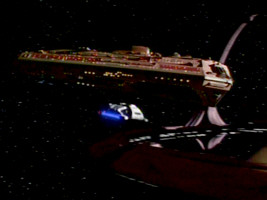 Three upgraded Pakled vessels appear in LOW: "No Small Parts". The design of the animated vessels is based on the original Mondor miniature. We can see on a display how the ship that started as a small Mondor type was supplemented with parts of different origins. The not-so-familiar symbol on the screen is that of the Arkonians. 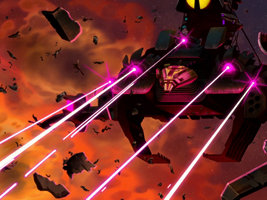 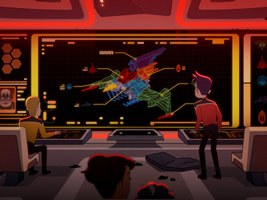 The table shows all versions of the miniature at a glance with coarse size estimations:

Finally a tip: Open each of the clickable side views in a new browser tab or window and enjoy!