by Jonah Kuttner and Bernd Schneider

This article looks at port (red) and starboard (green) navigation lights on Starfleet starships, a feature that Matt Jefferies was familiar with from aviation and that he added to the original Enterprise. Almost all Starfleet ships that appeared in later series and movies also had these lights (at least they could usually be identified whenever the resolution of the shot allowed it). There are very few exceptions, but there is one glaring one that will be addressed.

Navigation Lights in the Real World

In the real world, navigation lights serve important purposes in aviation and shipping. They provide information as to the heading and position of the craft. Among the various lights that are required, this article focuses on the port (red) and starboard (green) lights found on all planes and ships or smaller boats. Generally these are designed to be seen only from certain angles to give more detail in the real world.

Navigation lights on the Carnival Vista (photo by Jonah Kuttner)

Matt Jefferies, designer of the original NCC-1701 in the 60's, was an airplane pilot. As a result, it is not a surprise that the Enterprise has red and green navigation lights. They can be found on the top of the saucer section only. They flash on and off about every 2 seconds. From this point forward, almost all Federation starships have red and green running lights throughout all the series and movies; it's just one of the list of features that they have regardless of configuration.

As we go through the real-world production timeline, this brings us to "Star Trek: The Motion Picture". The redesign of the Enterprise again features red and green navigation lights on the edges of the saucer section on the dorsal side, but now on the ventral side as well. Again they flash on and off about every 2 seconds. Now note that with the movies (and many of the TV shows) being on film, different compositing and color timing sometimes render the green light more orange, or white. It's always there. The Reliant from "Star Trek II" has the same lights on its saucer plus a few more red and green lights on the aft portion. 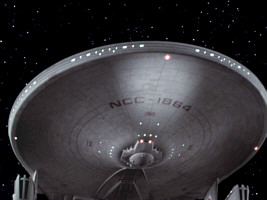 Things change slightly in "Star Trek III". The two new ship designs (the Grissom and the Excelsior) still have red and green lights but they are constantly lit, not flashing.

We arrive in the "Next Generation" era. The original (non-HD) version of TNG suffered from a lot of murky video at times, but on the Enterprise-D, the lights have always been on the dorsal and ventral edges of the saucer and another set at the very aft (they are kind of close together, that seems to have limited utility). The only exception we could spot is in TNG: "Ménage à Troi", probably due to flipped footage. Not every shot of a Federation ship throughout the run of TNG has them discernible. Alternatively the Enterprise-C has red and green lights on the saucer but this is a great example of how the green lights end up looking yellow or white as the aforementioned compositing, etc. leads to false colors. The actual colors are more obvious on the HD remastered version of TNG, but while it is different from the red one, the green light is still yellowish. In TNG, even the Type-7 shuttles have red and green navigation lights. 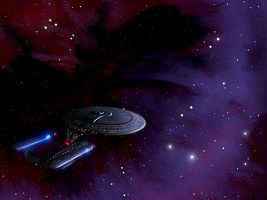 On a side note about ships in TNG, you can make out similar lights on Klingon ships as well. See? Even Klingons can follow some rules at times. 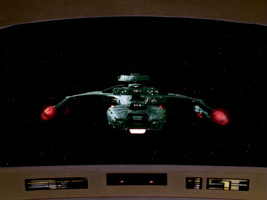 Deep Space Nine brought us runabouts first, and they have the lights on the warp nacelles. When the unusually designed Defiant came along, red and green lights could be found on the edges of the Starfleet pennant on the warp engine cowlings. The guest Federation starships generally had them too. At least in close shots the lights are usually visible. 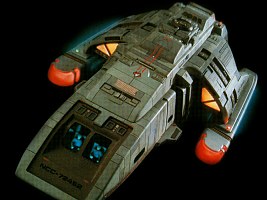 USS Voyager has a greater complement of red and green navigation lights than other ships. They can be seen on the edges of the "saucer" (primary hull) on the ventral and dorsal sides. They are also found behind the shuttlebay and on the warp nacelle aft ends. Few guest Federation starships appeared in Voyager but I wanted to point out the Equinox. The ship is so relatively small that its navigation lights create a little cast of color on parts of the hull.

It's good to pause here and note that in the real world you can only see the red and green navigation lights from the front and a limited angle to the side. In Star Trek they are visible from a 360 degree vantage point around the ship, above and below. One can kind of picture in pitch black you can still tell what direction the ship is going based on what light was on what side, coupled with the other navigation/formation lights. 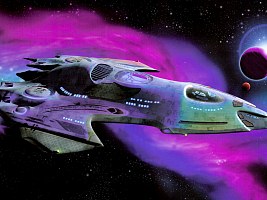 This brings us to the Enterprise-E that has the lights as well. They are located just on the dorsal and ventral sides of the primary hull. All the various ships in the big battle scene of "Star Trek: First Contact" have navigation lights somewhere.

The NX-01 Enterprise takes us back, obviously, and the designers went old school and made the lights flash again at the 2 second rate just like the original NCC-1701. The saucer has the lights in the standard positions as do the warp engine afts, just like Voyager. 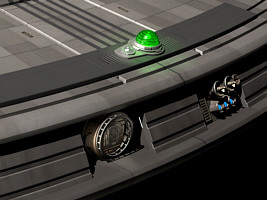 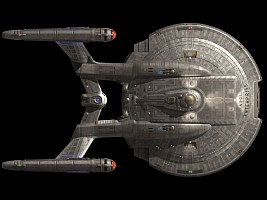 Let's talk about the Abramsverse/Kelvin Timeline NCC-1701. It's got all sorts of lights for navigation and visibility all over the saucer for example but it takes a sharp eye to find the ship's red and green lights. Best example is the beginning of "Star Trek Into Darkness", when the Enterprise warps away before the opening title. The lights are at about the 10 and 2 o'clock positions on the primary hull/saucer...not on the very edges. It looks like there is a small cowling preventing the lights to be seen from the aft part of the ship. They only seem to be on the top of the saucer, nowhere else. The USS Kelvin kinda seems to have them too, but sometimes the shots go by so fast it is hard to discern. Note the Vengeance and the Franklin do not seem to have any lights along those lines. This is where the pattern starts to seemingly break down.

Star Trek Discovery is a mixed bag, and a clear pattern of navigation lights does not seem to exist. Lots has been said about the reimagining/redesign of the whole look in this pre-Kirk era. 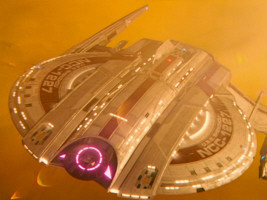 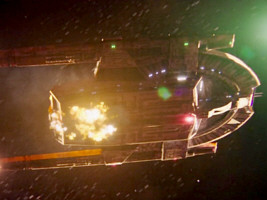 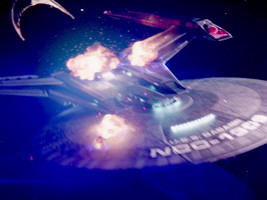 This brings us to USS Discovery NCC-1031. Through all we have seen of the ship, it has these green lights on both edges of the hull. Being a "star" starship this is surprising. Almost every shot of the ship throughout the series shows the same thing. Green lights on the saucer, the engines and so on. No port-side red lights...but then in the episode "Project Daedalus", an early appearance of Discovery features red and green lights that flash just like the original Enterprise on its hull. Further shots of Discovery in that same episode go back to the green lights everywhere. 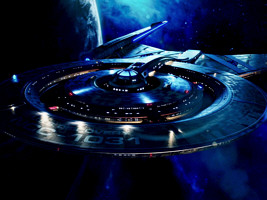 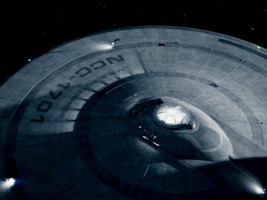 The USS Discovery is inconsistent but at least the lights on the Enterprise reimagining in Discovery are correct!

Some screen caps from TrekCore. Thanks to Armando J. for the hint about the flipped navigation lights in "Ménage à Troi".