The History of the Nebula Class Studio Models

by Alexander Hartmann and Bernd Schneider

Our article lists all models (miniatures and CGI) of the Nebula class that appeared on screen and identifies modifications to the models.

Two prototype models for the Nebula class were built, using parts from AMT Enterprise-D model kits. Model #1 was labeled as USS Melbourne and damaged for TNG: "The Best of Both Worlds II". It later appeared as an unnamed destroyed ship in DS9: "Emissary". The other model, #2, could be seen in Riker's ready room in TNG: "Future Imperfect" and, after the addition of the typical Nebula pod, as #3 in Sisko's ready room on Deep Space 9.

Nebula prototype #3 with pod in DS9: "'Til Death Do Us Part"

The Nebula prototypes are described in more details in the separate article Proto-Nebula Class Reconstruction.

The model was cast using molds of the 4ft Galaxy-class saucer and nacelles, together with a custom-made engineering hull, which would correspond to an actual model length of around 2.6ft or 80 centimeters.

The saucer has fewer windows and escape pods than a Galaxy class and no saucer impulse engines. The ship was intended to be a smaller vessel, but time constrains are given as a reason for reusing Galaxy molds instead of creating new ones (e.g., outer rings of escape pod hatches on the saucer were just painted over and not sanded down, recesses that would be cut out for the outer rings of windows are still visible). 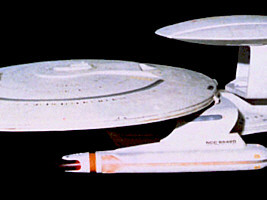 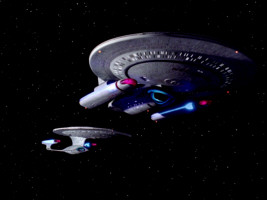 USS Phoenix in TNG: "The Wounded"

This is the first studio model modification. The most obvious change is the new triangular pod and single pod pylon. There are possibly other, minor modifications.

All labels were changed to USS Sutherland NCC-72015, possibly with other modifications (e.g., Starfleet arrow and stripes behind bridge).

The episode shows the ship with phaser burns to its hull, but no photo of the studio model shows any such damage. This might have been added shortly before filming. 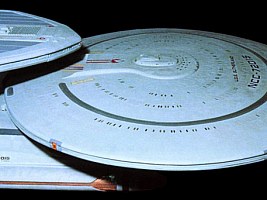 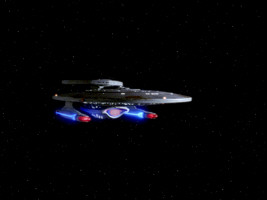 All labels were changed to USS Bellerophon NCC-62048. No physical modifications.

All labels were changed to USS Prometheus NCC-71201. No physical modifications.

The studio model was modified for a second time. For "Generations", it was repainted at ILM by Larry Tan and John Goodson. Other alterations include: flat saucer surface, addition of RCS thrusters above pylons, other minor changes and added detailing, new paint job (blue-gray with metallic blue highlights). 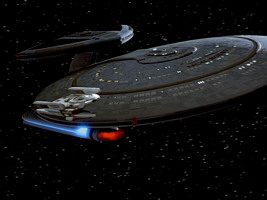 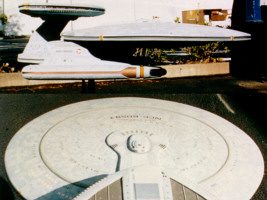 Modifications for appearances on DS9

The bottom saucer and pylon registry were changed to USS Leeds NCC-70352, the rest remained as USS Farragut NCC-60597. No physical modifications.

The name USS Leeds was added to the ventral side of the saucer (normally, only the registry would be painted on the saucer's underside). As the ship was only filmed from below, markings on top were not changed. The model remained in this configuration (Farragut top/Leeds bottom) for all further appearances.

DS9's fourth season introduced a new title sequence featuring the Leeds docked at the station. The season premiered in October 1994, with DS9's "The Visitor" airing late October and VOY's "Non Sequitur" in late September, suggesting that all three appearances were filmed at the same time.

DS9's "Sacrifice of Angels" is an oddity as the footage of the Nebula was added to an existing stock footage shot of the station. It is the only time this particular version of the footage was ever used. It may have been previously unused material, as the studio model had been retired after "First Contact".

In the late 1990s, CBS begun displaying the model as part of the "Star Trek The Exhibition" tour until 2011, still in its Farragut/Leeds configuration. 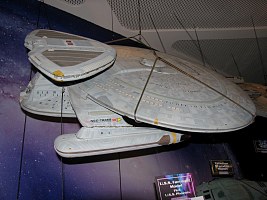 Nebula class in DS9: "The Visitor" and "Profit and Lace"

Appearances in DS9 and VOY

The ship was kitbashed from existing CG Galaxy parts, leading to a changed secondary hull that is much closer in appearance to that of a Galaxy. Also, the ship has additional rows of lifeboats and windows on its saucer and a different saucer shape (with a slim saucer rim), again due to the reuse of an unaltered Galaxy-class saucer, which was in turn based on the 6ft Enterprise-D model. The saucer has two impulse exhausts, but the additional thrusters above the pylons are gone. Hull markings are different (most notably Starfleet arrows and stripes on the ventral nacelles and secondary hull). No saucer ring.

After "Waltz", labels were changed to the Bonchune. For its DS9 appearance in season 7, the model apparently remained unlabeled on its saucer, but retained the pylon label (which most likely still read NCC-70915). For Voyager's finale, the ship's main name/registry on its saucer was restored to Bonchune. 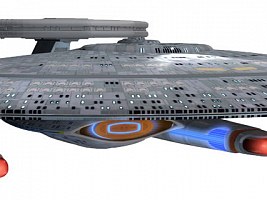 Nebula class in DS9: "The Changing Face of Evil"

Nebula class in DS9: "The Changing Face of Evil"

Note The Nebula-class CGI model may also appear in DS9: "The Reckoning" und VOY: "Relativity" but we could not confirm that.

In addition to the BoBW prototype variants, we have seen 4 hero variants: Phoenix, Sutherland, Farragut and Honshu. If the pod is a modular component and interchangeable, Phoenix and Sutherland could be considered the same variant as there are no differences between them besides the pod. Farragut has a different paint scheme, different detailing and hull markings. Honshu (CGI) marks the most radical departure with a completely different saucer and secondary hull design, similar to the Enterprise-B variant of the Excelsior class.

There is no apparent pattern to the variant/registry, but we may assume that these differences are either intentional sub-classes or due to different production facilities.

Some screen caps from TrekCore.