Variations of the Negh'Var

We can see the capital Klingon ships of the Negh'Var class in several different timelines and universes, with a number of modifications over the years. These are the appearances of the Negh'Var model in the airing order of the episodes:

In addition, we could see the Negh'Var on display graphics in DS9: "Favor the Bold", DS9: "Tears of the Prophets", DS9: "Tacking into the Wind" and VOY: "Drone".

The ship miniature was originally created for TNG: "All Good Things", using the central portion of the Vor'cha model, as the comparison of the dorsal and ventral views of the two ships demonstrates. If, however, the real ships were using common parts, the Negh'Var (usually listed as being as long as 682m) would be almost the same length as the Vor'cha (481m). 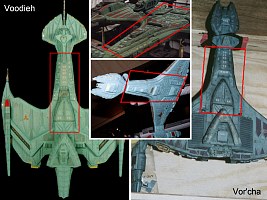 Comparison of Negh'Var and Vor'cha models (image by Bernd) 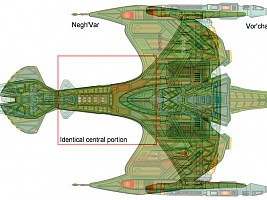 Comparison of Negh'Var and Vor'cha diagrams (image by Bernd)

The future variant of the Negh'Var (ca. 2395) that appears in this episode is commonly known as "Voodieh" to distinguish it from the standard Negh'Var, although it was called so only behind the scenes. The correct spelling according to The Klingon Dictionary is "voDleH" (Klingon for "emperor"), so we will go with this designation. We can see two of these big vessels in the episode that hopelessly outgun the hospital ship Pasteur but are still no match for the upgraded three-nacelled Enterprise with its "super-cannon".

The most obvious feature of the voDIeH is the shape of the wings that are horizontal and not bent down in any fashion and are forward-swept unlike they are on other Klingon ships such as the Vor'cha. The voDIeH has not yet the additional underslung pods that can be found on the Negh'Var, but only engines that are integrated into the wing tips. Owing to the thickness of the wings it looks like there are separate engines with Bussard collectors above and below the wings. There are long antenna-like spikes on the engine front tips.

Likewise, another spike is protruding from the gap in the front section. This spike will be different on later incarnations of the model. We can also see an almost vertical grating behind the latter spike and the supposed bridge module, which is not illuminated in any fashion. Four rows of windows in the rounded lower part of the front section, underneath the spike, are illuminated. At the bottom of this hull portion we can still see two fins on this variant of the ship. As can be seen on the model photo too, the overall color of the voDIeH is green, without any triangular red panels, but with some yellow details.

DS9: The Way of the Warrior

For DS9: "The Way of the Warrior" the voDIeH model was modified to portray the new Klingon flagship of the present, the Negh'Var. On the Negh'Var there is still an antenna in the gap of the front section, but here it is so short that it doesn't protrude as seen from the side. The two fins at the bottom of the front section were removed altogether. The long thorns on the nacelles are gone too. The most obvious modification, however, is that the Negh'Var has two additional pods under the wings, between the main hull and the outer nacelles. These new pods are still without illumination here, and no purpose does become apparent.

The hull color of the Negh'Var is still the same green. It appears to be darker here, but that is most likely a matter of illumination. In any case some of the raised panels on the ventral side of the wings (and most likely on the barely visible dorsal side too) are now red. The painting scheme of the Vor'cha cruisers that appear in the same DS9 episode was modified likewise. The grating in front of the main bridge is still dark on the Negh'Var. There are fewer illuminated windows under the front spike than in "All Good Things", while the lateral lights in that hull portion appear to be the same.

Negh'Var in DS9: "The Way of the Warrior"

Negh'Var in DS9: "The Way of the Warrior"

In "Shattered Mirror" we can see Regent Worf's flagship, the Mirror Universe version of the Negh'Var. Although there were admittedly scaling errors with "our" Negh'Var too, the Mirror version was systematically and quite purposely scaled up relative to all other vessels, making this ship some 2 kilometers long, if we are ready to believe that. The Mirror Universe ship basically retains all the modifications made for the Negh'Var. But there are some additional differences that may help a little bit to justify that it is a lot bigger.

The forward spike that was shortened for the Negh'Var is now completely gone. The two new pods are still the same as on the Negh'Var and are still dark, but we can see on the Regent's flagship that a weapon is fired from the cylinder that is pointing forward.

The hull color is still the same, and the grate in front of the bridge is still dark. We can see that there are no lighted windows facing forward in the rounded lower part of the front section any more. But the lateral windows are all still there. Most obviously the Regent's flagship possesses a large number of window rows on the two sides of the main hull, including the leading edges of the wings. These window rows indeed insinuate a much larger size than in "our" universe, although they are not in line with the single bigger windows in the front section.

This episode of the fifth season shows a ship of the Negh'Var class of our universe again, which is only implicitly (but explicitly in the screenplay) identified as being the Negh'Var herself. The appearance of the ship in "By Inferno's Light", however, entirely consists of stock footage from "The Way of the Warrior". So there are naturally no differences in the ship design.

Quite surprisingly, this is the final appearance of the Negh'Var of "our" universe and present time. We don't know what happened to the ship in the Dominion War. The real-world reason may be that no one bothered to build a CGI model in time, when the special effects were switched to CGI in DS9's sixth season.

Negh'Var in DS9: "By Inferno's Light"

The miniature has another appearance as the Regent's flagship in the Mirror Universe in DS9: "The Emperor's New Cloak". The premise of the episode constitutes a continuity error, because the cloaking device is suddenly unheard of in the Mirror Universe, although we saw ships with cloaking in DS9: "Through the Looking Glass". Anyway, many of the scenes with the Regent's flagship are stock footage from DS9: "Shattered Mirror", only the accompanying vessels were removed.

Some shots in the episode were newly filmed though. In these new shots the front antenna that was missing in "Shattered Mirror" is suddenly visible again. Also, several new window rows were created in the front section, now better matching the many decks in the central section of the ship. Also, in the new shots there are new window rows on the bottom of the ship that were not yet visible in "Shattered Mirror" as well as at the beginning of the same episode "The Emperor's New Cloak". The grating in front of the bridge is still without illumination, and everything else matches with the ship's previous appearance in "Shattered Mirror" too.

In VOY: "Endgame" it is the second time that we see the voDIeH/Negh'Var in a possible future (ca. 2404), and once again two of them. The effects of the episode are all CGI, as nearly everything in the four last seasons of the series. Hence, a new CGI model of the Negh'Var was created. There are naturally some differences between the CGI model and the miniature it is based upon. Other than that, the CGI overall reproduces the look of the Negh'Var from DS9 but also incorporates some elements of the voDIeH from the other future episode TNG: "All Good Things".

The CGI model possesses a long antenna again, as the ships in TNG: "All Good Things". Likewise, two fins can be found on the bottom of the front section again, which were missing on all DS9 variations and which were reconstructed as in the TNG episode. On the other hand, the "Endgame" ships have the additional pods as all DS9 ships. They now have red front tips, and we can see that a beam is fired from there as already in DS9: "Shattered Mirror". The color of the red hull panels is more intensive than on the miniature. The same observation could already be made comparing the CGI Vor'chas in the Dominion War with those that appeared on TNG. Another new feature is that the grating in front of the bridge is now illuminated. Finally, there are much fewer window rows again, insinuating a smaller ship. In fact, this Negh'Var class appears to be barely twice as long as the Rhode Island (221m according to Rick Sternbach).

This table summarizes all variants and appearances of the Negh'Var model:

Klingon Ship Classes - from all eras