The "monster hunter" Qatai in VOY: "Bliss" owned a small vessel, probably not much bigger than a shuttlecraft. The CGI of this vessel reappeared in several more Voyager and Enterprise episodes (in chronological order):

The CG model originally appeared in VOY: "Bliss". It was created with considerable damage to the hull segments and the wings, like weapon bruises or twisted struts and hull plates, reflecting the vessel's intended age and Qatai's repeated battles against the "monster". The ship is always in fast motion relative to the camera in the episode, so no sharp screen caps are obtainable. Anyway, we can make out something like a window from the outside, whose size and inclination matches the inside view of the cockpit. The ship's nacelles are blue. Its look is correctly reproduced in the depictions in the Fact Files, which is no surprise as these are obviously renderings of the very CGI seen in "Bliss". So far no depictions of the later variants of the ship were available, however.

In VOY: "Alice" there are parts of Qatai's ship amongst the wreckage in Abaddon's Repository. We can see two angular central parts and one cockpit. As far as it is recognizable there are no changes to the model (except, of course, that it is not lighted). We can't tell anything about the size of this version of the ship (if it were complete), taking into consideration that there are dozens of other vessels in Abaddon's scrapyard that are totally off scale. 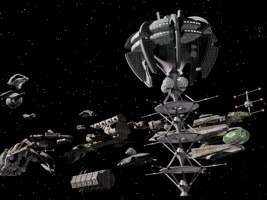 The looter vessel in VOY: "Imperfection" looks the same as Qatai's ship. Even the damage pattern may be identical. We can see the cockpit window more clearly on the looter vessel. Furthermore, while a direct comparison is not possible, it looks like the looter vessel is about the same size as the Delta Flyer, which corresponds with the observations from "Bliss". Hence, the two ships may be of the same type if we disregard that they are from distant parts of the Delta Quadrant.

The CGI of Qatai's ship is also among the spectators' ships that are lined up alongside the race track in VOY: "Drive". Once again there does not seem to be any modification to the model, though the battle damage may have been "repaired". But most obviously the previously tiny vessel is greatly scaled up here, bearing in mind that the neighboring ships outside the racing track all seem to be roughly Voyager's size. (Vice versa, some previously large vessels act as racing shuttles in the same episode.)

There is only a brief glimpse of Qatai's vessel's CGI in VOY: "Natural Law" when it passes by the Ledosian station. As far as we can see it is the original version without changes.

Qatai's vessel was modified for the first time for its appearance as Nocona's ship in VOY: "Homestead". All damage was removed, to start with. Most visibly the color of the engines was switched from blue to yellow-green. The small position lights are now yellow-green as well. The hull color is probably different too. Instead of brownish, Nocona's vessel appears to be rather green-gray. The most significant alteration, however, is that the cockpit window was covered with three-dimensional structures (not just a skin). A green illuminated protrusion in the sloped bow looks like a bridge and makes the whole vessel look much bigger. This was a wise decision because in all combat scenes from the episode Nocona's ship appears to be substantially larger than the Delta Flyer or the Talaxian fighter. It even looks like there are two rows of windows in the lower bow section and underneath the very forward end of the wings.

The shuttle in ENT: "Broken Bow" is a hybrid; it has yellowish engines much like the ones of Nocona's ship but the cockpit window of the original version, Qatai's vessel. In addition, the two hemispheres on the underside are blue, as we can see after the shuttle has lift off. Also, the position lights are different. The vessel is not longer than some 12m here. But it has to be totally unrelated to any of the Delta Quadrant incarnations anyway.

One of the ships that can be seen leaving Xantoras in ENT: "The Breach" is yet another reincarnation of Qatai's vessel. There are apparently no changes relative to the original configuration (except that the ship at Xantoras most likely does not have the hull damage). We can clearly see the cockpit windows with its three-part sash.

Visitor ship to Xantoras in ENT: "The Breach"

The CGI appears for one last time in a more prominent role again - as an Yridian shuttle in ENT: "Twilight". There are no substantial changes. However, the two hemispheres on the dorsal and on the ventral side of the wings are both illuminated blue in this variant. More precisely, the illumination is annular, with the caps still being opaque. We can see the cockpit windows again. The color of this vessel is uncertain because it is illuminated by bright yellow solar flares.

The following table lists all the variants and appearances of the ship model. Note that it is a summary of modifications to the CG model, rather than of the "real" in-universe vessels.