Redresses of the Ramuran Tracer Ship

The computer-generated model investigated in this article first appeared in VOY: "Unforgettable" as the Ramuran tracer ship and subsequently showed up in four more Voyager episodes with some modifications. These are the appearances in chronological order:

The hull of the Ramuran ship is dark silver metallic, and we can't make out many details. There is a blue seam around the twin engines at the aft end when they are powered down, while they are overall bright white when they are activated. We can see four bright blue illuminated areas in the middle of each side of the hull, consisting of two narrow rectangles to the fore and two wide ones behind them. At the lower end of the front tip we can make out another blue area. Considering that the Ramuran ship is quite small (<50m) relative to Voyager, could these supposed to be windows? The cockpit windows that are visible when Chakotay beams over with an away team, on the other hand, are not reproduced on the CGI model.

There are some more illuminated strips at the inward sides of the engine "wings", the foremost wrapping around the front tip. The ventral side of the ship is quite simplistic. 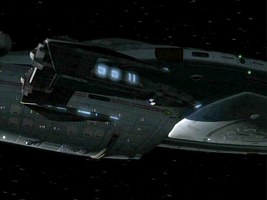 Two years later, we can see essentially the same CGI model again, but this time with noticeable modifications as the Kobali ship in VOY: "Ashes to Ashes". The overall hull color is now brownish. Looking more closely, we can see hull plates that are gray, while others range from brown to orange. All hull areas are dull unlike on the rather shiny Ramuran vessel. The color of the aft engines, as well as all areas that used to be light blue on the Ramuran vessel are now violet. The engine glow is always violet, regardless whether it is activated or not.

The four luminescent areas on the sides of the hull are somewhat different now. Their arrangement is still the same, but these apparent windows are now further subdivided, giving us the impression of a larger vessel. Yet, in a direct comparison with Voyager it doesn't look bigger than the Ramuran ship (perhaps because the same scaling was being used), while the one Kobali ship in pursuit of the shuttle would have to be much longer than just 50m.

The illumination of the wings is still the same on the Kobali ship. In addition, there are two violet rectangles at the aft end below the engine exhausts. This rectangle could be found already on the Ramuran version, but was not illuminated there. The Kobali ship also has new rows of windows close to the front tip. However, there are no windows yet on the slight superstructure of the front tip (that would be far lower than one deck at the established scale).

Looking at the sloped surface at either side of the aft end, we can see that the hull surface was modified in this area. On the Ramuran ship there used to be a deepened area with single raised plates on the 45° sloped surface of the trapezoid hull portion. This was completely filled on the Kobali ship, and additional strips were added to this new hull surface. Likewise, there was another deepened area with some details on the upper/outward sides of the engine "wings" below a raised strip. While this strip is still there on the Kobali ship, the hull area below it is now flush with the rest.

The former Ramuran tracer ship, like many other CGI models of the series, was drafted to serve as a racing shuttle in VOY: "Drive". It is rather hard to recognize in the line-up because of the sheer number of participating vessels. But it appears once in the course of the race, in the fourth position behind the Delta Flyer and Irina's and Assan's ships. We can see that the unchanged Ramuran ship was used, not the modified Kobali version. Considering that the Ramuran version appears to be less complex (and would likely have a smaller file size) and that we never see a close-up anyway, it may have made sense to use this version, although it may have been outdated.

The CGI model was modified extensively for its appearance as the Annari ship in VOY: "Nightingale". Once again the hull color was changed. The ship exhibits gray and red areas. The engine glow is now yellow and overall more complex. We can see that the effect consists of multiple nested yellow frames instead of just one evenly lighted area. There are also two new outer engines with triangular shapes that could not be found on the previous incarnations of the model. The two rectangular areas that used to be lighted on the Kobali model are now dark again, however. The light strips on the inward sides of the wings are still the same, but were supplemented with outward strips. The latter correspond exactly with the raised hull parts inside the deepening that could be found just on the Ramuran but not on the newer Kobali ship.

The four illuminated areas on the sides of the hull are dark on the Annari ship. On the other hand, the Annari ship has received many small new windows. There are now windows on either side of the superstructure near the front tip too, and larger (bridge?) windows facing forward. The underside was supplemented with structures that let this area appear less simplistic than on the Ramuran vessel. These include four cylinders under the wings.

Given the correspondence of some details, especially on the wings, it appears that the original Ramuran model was modified to the Annari vessel, rather than the newer Kobali variant. On the other hand, the Fact Files illustrations of the Ramuran and the Annari ships that are directly derived from the CGI models have slightly different proportions, indicating that the Annari model may have been more extensively modified or even been built from scratch.

The model appears for the last time in VOY: "Q2". Once again the original Ramuran ship was re-used, possibly for the same economic reasons as already in "Drive". When Neelix enters the astrometric lab, the first ship, the modified Vaadwaur ship (VOY: "Dragon's Teeth") can be seen on the screen (Type 1). Then the Ramuran ship appears (Type 2). Q Junior says that he is watching a fight "between the Vojeans and the Wyngari". We might conclude that the Vaadwaur ship is Vojean and the Ramuran would be Wyngari. But there is no real clue. A bit later Q Junior sends another ship into the battle, represented by Assan's ship from VOY: "Drive" (Type 3). Like the Ramuran vessel, this one too fights against the Vaadwaur ship. 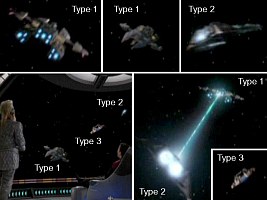