Redresses of the Straleb Vessel

The model of the Straleb security vessel was built for TNG: "The Outrageous Okona". The Star Trek Encyclopedia II states that the ship miniature was later modified and used for the Angosian transport vessel. It was never really evident how the model was modified and how many different versions exist. DVD and Blu-ray screen captures shed new light on this issue and are analyzed in the following. These are the appearances in chronological order:

The Straleb security vessel is based on a sketch by Rick Sternbach. This sketch is depicted in Star Trek: The Magazine, June 2002. Just like the teleplay of the episode calls for, it is an overall primitive looking boxy vessel with a rounded command section with characteristic cut-outs on the top and bottom halves, rudimentary wings (possibly the warp engines) and rocket exhausts at the very aft end. The finished studio model deviates from this sketch, however. Most obviously there are many more hull details and the rocket engines are different. Nevertheless, the widespread depiction of the ship in the Star Trek Fact Files is nearly identical to Sternbach's sketch so it can be taken as granted that the graphic artist used this as a reference, rather than an actual screen capture or model photo. 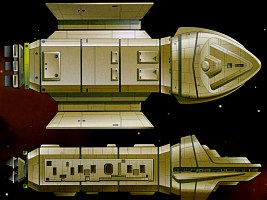 Like the Atlec ship that appears in the same episode, the Straleb security vessel is small compared to the Enterprise-D (some 150m), yet there is supposed to be a bridge not unlike on a Federation ship. 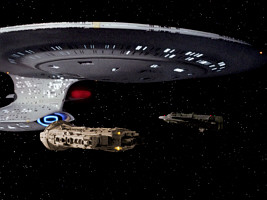 The miniature was adapted for its appearance as an Angosian transport in TNG: "The Hunted". There are two Angosian ships in the episode, and we previously believed that they may have been different, and if only slightly. It looked like the first ship (the one in which Roga Danar had escaped from prison) had no nacelles, whereas the police shuttle that showed up later and could be seen from the rear did have nacelles. However, the first Angosian ship had these nacelles too. 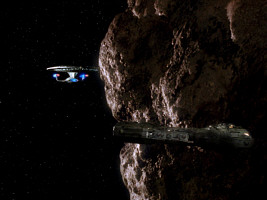 Angosian ship I in TNG: "The Hunted" 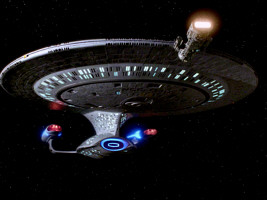 In two freeze frames from the scene in which the Angosian ship circles around an asteroid, we can look at the ship from two slightly different angles. As the angle rises to nearly 90° (in other words, straight from the starboard side), the distance between a structure on the side and the engine section increases. This is only possible if the said structure extends beyond the main hull. Further comparison reveals that this protruding structure is identical to the nacelle on the Straleb vessel. Thus far the ships are identical, even if the very different depictions in the Fact Files suggest otherwise.

As we continue the comparison, we easily notice that the Angosian ship is gray instead of brownish. The additional engine section attached to the rear end of the Angosian vessel is another obvious modification. This is exactly the part of the ship that is detached in the episode (in one of Roga Danar's many ruses to escape). Unfortunately the Straleb vessel can only be seen from the rear end. Therefore it is not ultimately clear whether there were really sections cut off from an otherwise spherical command section, as Sternbach's sketch suggests (and, for what it's worth, the Fact Files too). But if we assume that this is what the ship really looked like, these sections were later filled on the Angosian ship. This modification is plausible if we take into account that the Angosian version was supposed to be smaller. Additionally the lighting was modified to create the impression of a smaller ship with possibly only one main deck and a cockpit like on a shuttle. The interior of the Angosian vessel with a cockpit window can be seen in the episode. Although it may not be a perfect match to the exterior, the set is plausible. 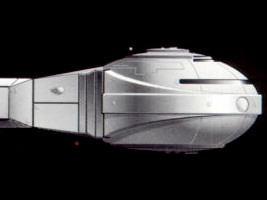 Regarding the considerable difference between the Fact Files drawings of the Straleb and the Angosian vessel, we can only assume that whoever made the Angosian ship image either didn't know of the model's origin, or followed the screen captures rather than in the case of the Straleb vessel, of which convenient yet inexact drafts were readily available.

The studio miniature of the Angosian ship was an item at Christie's 40-year-anniversary auction. The photo in the auction catalog clearly shows the model as it looked when it represented the Angosian ship, only with many more hull greebles than are visible on screen or in the Fact Files depiction. Surprisingly the photo closely matches the Fact Files depiction of the model's final incarnation as Corvallen freighter. As will be shown below, the latter is just stock footage of the first appearance as Straleb vessel, whilst the miniature most likely remained the same ever since TNG: "The Hunted". The gray color of the model at the auction is further evidence for this assumption.

The next appearance of the ship miniature is in TNG: "Man of the People" as the Dorian (the ship that transported the criminal negotiator Ves Alkar). There is not much to add, everything is just stock footage from TNG: "The Hunted", only that it is odd that a sublight ship like one of the Angosian type should be encountered in open space. 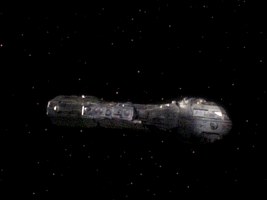 Dorian in TNG: "Man of the People"

Another appearance of the ship is as Corvallen freighter in TNG: "Face of the Enemy". Careful analysis, however, shows us that every take of this ship is just stock footage of TNG: "The Outrageous Okona", only mounted into a Romulan viewscreen or alongside the exterior of the Romulan D'deridex. Curiously the Fact Files has a distinct drawing of this vessel with most characteristics of the Straleb vessel, but with more hull details and moreover with the engine section of the Angosian vessel, although the Corvallen freighter is evidently the same as the Straleb ship. A possible explanation is that whoever made this drawing may have thought that the scenes were new, and that the engine section of the Angosian ship was present. The other motivation may have been to correct the too coarse look of the Straleb depiction in the Fact Files. Anyway, such a Corvallen ship as depicted there does not exist. 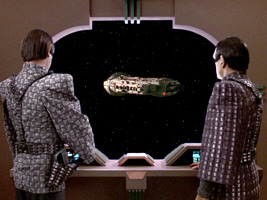 Corvallen freighter in TNG: "Face of the Enemy"

As already mentioned, the Fact Files have a distinct top view of the Corvallen vessel although it is evidently not a distinct design. But the wrong drawing almost perfectly matches with how the Angosian incarnation of the ship looks. So we may conclude that whoever made the Fact Files drawing must have had access to the actual studio model or photos thereof which, after it had been retired, still looked the same as in TNG: "The Hunted". Unbeknownst of the fact that the ship in "Face of the Enemy" was stock footage of a still earlier version, the artist faithfully reproduced the model on the photos but gave it a brownish color as visible on the screen caps of the Corvallen freighter.

So the Fact Files give us three very different depictions of two relatively similar variants of the same model all of which are inaccurate in some fashion:

Our reconstructions of the side views of the two authentic variants (albeit not quite as detailed as the model really is) shed light on the whole mess.

This table lists the appearances of the two versions with the corrected side views at a glance:

The Antares Class(es) - too many designs with the same name