The computer-generated ship model under investigation first appeared in VOY: "Concerning Flight", when a group of pirates led by a man called Tau raided Voyager. The model was repeatedly modified and showed up in four more Voyager episodes. These are the appearances in chronological order:

The first time that we can see the CGI model is in VOY: "Concerning Flight", when Voyager is attacked by several of these small fighters. The predominant color of the hull is gray, although a couple of details such as parts of the cockpit, the engines and wings are painted green. We can already recognize the angular cockpit section of the ship that will remain essentially the same on all later variants. On the side of the cockpit we can see a long field in the lower half, which is colored green here. The upper half is subdivided into four rectangles. The cockpit window is divided in halves by a vertical strut. Close to the front tip on both sides of the cockpit there is a small wing, reminiscent of a "canard". 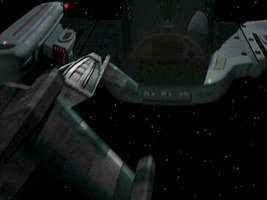 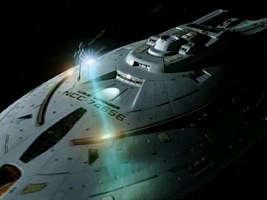 The fighter has two "vertical stabilizers", one pointing upward and one pointing downward. The wings are comparably long and are sloping down at some 30° or a bit more, with their tips almost going down as far as the lower "vertical stabilizer". At the upper ends of the wings we can see two large angular pods. These are most likely supposed to be engine nacelles, although they are never accordingly illuminated in this episode. At the wing tips there are similarly shaped pods that almost look like the smaller versions of the upper engines.

This variant of the model can be seen in VOY: "Counterpoint". The most obvious difference to the pirate fighters is that the wings were considerably shortened. Also, instead of the pods with the angular cross-sections on the wing tips we can now see some sort of tubes in this place. Likewise, the big angular engine pods were replaced with tubular ones. The new engine tube is predominantly green, a color left over from Tau's fighter although the rest of the hull of Torat's ship appears to be all gray. The "canards" are gone. The cockpit section is mostly the same, only that the long green field in the lower half is now gray like the rest. The cockpit window consists of one single pane on Torat's ship for all we can see. Like already on Tau's fighters, there is nothing such as an engine glow.

We can also briefly look inside Torat's cockpit, which looks comparably spacious, although the one-piece cockpit window visible from outside suggests that the ship is overall only a few meters long. Unfortunately the steep windows that we see from inside do not match anything visible from outside.

Kes's shuttle from VOY: "Fury" looks just like Torat's at the first glance. But there are some modifications. The most definite one is that an additional engine tube was added underneath the wing. This one looks like a smaller copy of the big upper engine. Speaking of the big engines, their color is no longer green but gray like the rest of the shuttle. However, there is something like yellow stripes on the engine tubes, which are rather well visible on the screen caps, although they look like dirt on the Fact Files side view. The two big and two small engines are illuminated for the first time on Kes's shuttle, the color is green. There is also a new red position light on the top of the vertical wing.

We can barely see on the screen cap with the front view that the cockpit window is partitioned with horizontal struts. A look at the Fact Files top or front view that are directly derived from the CGI model confirms this observation. It is possible that these struts were already on Torat's ship, although we have arguably seen it from angles where we should have been able to recognize them better than in the episode with Kes. 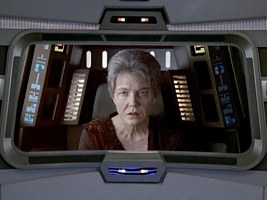 Unlike Torat's cockpit, the one of Kes's shuttle (actually a slight redress of Braxton's timeship Aeon from "Future's End") is quite crammed. We could well imagine that Kes's cockpit is actually located behind the cockpit window visible from outside.

Kes's shuttle, like many other CGI models of the series, was drafted to serve as a racing shuttle in VOY: "Drive". It is the fifth vessel from the right in the line-up (and the fourth vessel visible on the screen cap). We can see the shuttle during the race too. The racing shuttle is the very same design that previously appeared as Kes's shuttle. Only the color of the engines was switched from green to red, and just the two upper big engines are illuminated, possibly owing to simple inattention.

The model was modified once more for its appearance in VOY: "Repentance". This was not only required to establish a visual difference to the previous appearances, but also because the Benkaran ship was meant to rescue a prisoner and hence to carry more than just one person. The most obvious modification was made to the front portion, as the small cockpit was remodeled to a habitation section with several windows, insinuating a much larger size of the vessel. The big cockpit window and the four rectangles in the upper half of the front section are gone, the hull surface in this area is now even. There is one new front window occupying the whole width and wrapping around the corners, and four smaller windows on each side. In addition, the engine pods have switched places. The big ones are now underneath the wings, and the small ones are on top. The engine color is orange on the Benkaran vessel. Other than that, there are no further changes to the design. The hull color is still gray but with a shade of beige. 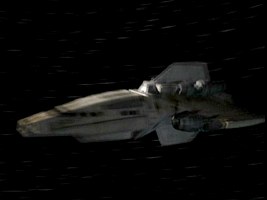 The Star Trek Fact Files depict five orthographic views and an angled view of Kes's shuttle but none of the other variants of the CGI model. Our side views of these other incarnations are reconstructed based on Kes's ship, assuming that the general proportions have always remained the same.

The five Fact Files views are not congruent. Especially the fore view is off compared to the rest. They either belong to different model versions, or the fore view is not orthographic but includes a perspective. 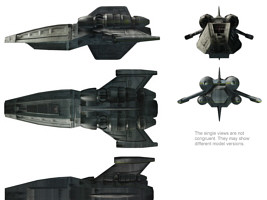 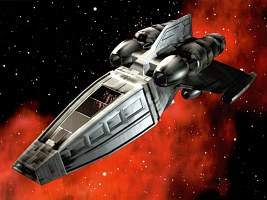