The T'Pau model appears in only three episodes, but looks different each time:

We have a look at all available screen caps and reference photos and reconstruct how the miniature looked in all three phases of its existence.

The miniature first appears towards the end of TNG: "Unification II". Here, the T'Pau mentioned earlier in the episode and two other Vulcan ships of the same type are shown on the Enterprise-D viewscreen. We only get to see the aft view of the three ships. Then a Romulan warbird appears and destroys them.

We can recognize that, besides position lights, the ships have a red engine glow at the aft end of the main hull. In addition, there is a blue light between the hull and the upper portion of the ring. Only the Blu-ray caps reveal that there is an additional triangular red light underneath the lower part of the ring. Although none of the photos available to us show this portion of the model, we assume that this is not just a CG manipulation and that there is an according structure at the bottom of the ship. 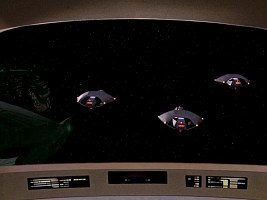 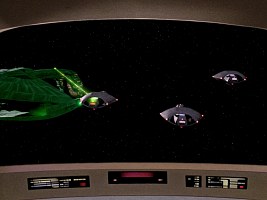 When the miniature was rebuilt to serve as Tosk's ship, some parts were added. We can see two pairs of flipper-like wings that were added to the boxy main body. In addition, a large section was added to the upper aft end of the ship. 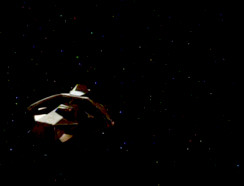 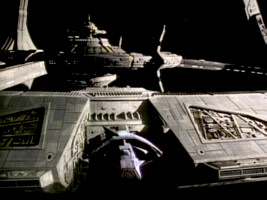 Tosk ship in DS9: "Captive Pursuit"
On the top of this new area there is a whitish pattern of triangular shapes. At first, I thought it could something like a logo, but then I studied the interior of Tosk's ship and saw that this pattern exactly matches the shape of the cockpit window. The window can be seen much better on the model photo further below. So the cockpit window is located there, and its size supports the scaling of the ship, which looks only runabout-sized compared to the station. Only the slope isn't correct because on the model the ceiling is almost horizontal. Incidentally, the cockpit set of the Nenebek was modified for the interior of the Tosk ship, as it is already described in another article. 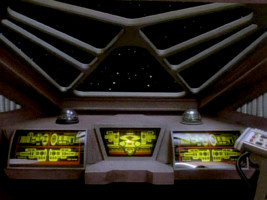 The hull of the ship was completely repainted in rust brown/red. No Vulcan characters and no IDIC symbols are visible any longer. New, rather faint characters are now placed a little higher on the side of the ring hull. In addition, white stripes were attached in various places. Small tubes were added to the tips of the ring area of the ship.

DS9: For the Cause

When the model was finally seen again as a Vulcan ship in "For the Cause", some changes were reverted, but most others were retained. The hull of the ship is still rust-red/brown and the white stripes are still there. The four pointed wings were all removed, but the cockpit area and the tubes on the sides of the ship are still there. A new part was placed where the cockpit window was on Tosk's ship. In "For the Cause" the ship had to look much bigger again, and the the cockpit windows would have been a visual cue of a small ship. The question is why the window wasn't simply overpainted. Was the plan to revisit the story about the hunters and Tosk? Anyway, the model in its partially reconstructed form has more in common with the Tosk ship than with its original Vulcan appearance.

Vulcan freighter in DS9: "For the Cause"

Vulcan freighter in DS9: "For the Cause"

There are photos of all three stages of the evolution of the miniature: the original appearance as the T'Pau in TNG: "Unification II", the Tosk ship in DS9: "Captive Pursuit" and the reconstructed Vulcan freighter in DS9: "For the Cause" ("T'Pau variant" in the Starship Database). The latter is how the miniature looks still today and was on auction two times (Christies in 2006, Julien's auctions in 2019). On the newest photos from the auctions, we can even recognize the traces of glue where the wings were attached and that apparently were not overpainted. 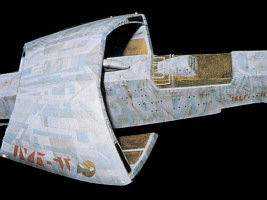 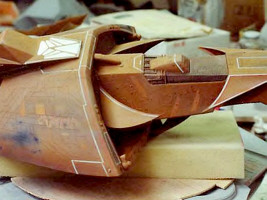 Vulcan ship from DS9: "For the Cause" (Christie's catalog) 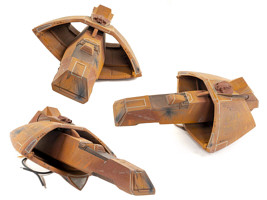 Vulcan ship from DS9: "For the Cause" (Julien's Auctions)

The photos of the latest configuration, as well as an old Polaroid image of the original T'Pau mounted on a rod, reveal a triangular part facing forward underneath the ring. This was not visible on any screen caps or any so far known depictions of previous stages of the model. But it is certain that the triangular part (which appears to be translucent) was present already on the T'Pau. The original design sketch by Rick Sternbach confirms that it is meant to be the deflector. The deflector is similar to the triangular red light visible in "Unification II", which is located in the same housing, facing aft. The T'Pau miniature as reconstructed for the Official Starships Collection by Eaglemoss includes the aft light but not the supposed deflector.

Filming of the T'Pau
(image by D H)

Highlighted in green on our comparison image are all parts that were added for the Tosk ship and never removed: the cockpit superstructure and the lateral tubes. Additions for the Tosk ship that were later ripped off are marked in purple: the four pointed wings. We are not completely sure about the curved strut on the underside, between the main hull and the ring. This likely is a part of the model and looks like the same style as the wings. If it was added for the Tosk ship, it too was later removed. Finally, in red, we can see the part that was added as a cover for the cockpit window.

The depiction of the T'Pau in the Star Trek Fact Files is reasonably accurate. We only added the underslung deflector to the side view. The Fact Files depiction of the Tosk ship, on the other hand, doesn't show any of the modifications that we identified. Most likely no reference photos were available at the time the publication was produced. 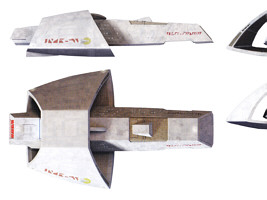 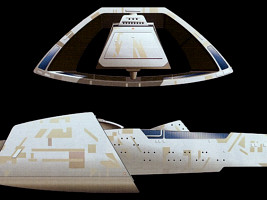 This table summarizes all the variants and appearances of the ship model. Note that, for the EAS Starship Database, we modified the side view of the T'Pau variant to a less brownish color, closer to that of the T'Pau.

Thanks to D H for extra images that show the deflector.