The Orbs are hourglass-shaped mystical artifacts that defy a complete scientific analysis. Once the ornamented casing that envelops each Orb is opened, the device induces powerful visions of the past or the future into people in its vicinity, or it enables the contact with its creators. In some cases Orb visions frequently return for a long time after the actual exposure, a phenomenon known as "Orb shadow". The Orbs, sometimes referred to as "Tears of the Prophets" were created by the Prophets or wormhole aliens of the Bajoran star system. According to the Bajoran religion, the Prophets sent them to guide and to teach the Bajoran people. Nine of these Orbs with different roles have appeared in the skies of Bajor over the course of about ten thousand years. The Cardassians stole all but one Orb before the end of their occupation of Bajor in 2369. Kai Opaka presented the one remaining Orb to Sisko, knowing that he would become the Emissary (DS9: "Emissary"). Although no agreement on the Orbs was found in the Bajoran-Cardassian peace treaty of 2371 (DS9: "Life Support"), several of them were later returned to Bajor, under various circumstances. Finally, a previously unknown Orb, the Orb of the Emissary, was discovered by Benjamin Sisko in 2375, raising their number to a total of ten (DS9: "Shadows and Symbols"). 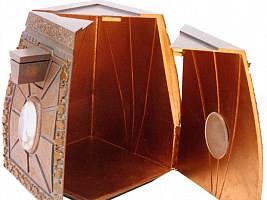 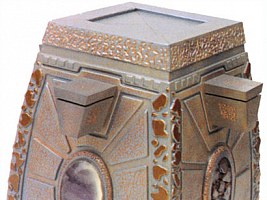 This is one of the original nine Orbs. The Orb creates flashbacks of the past in people exposed to its light. Its color is green. It is the only Orb that was not abducted by the Cardassians, because Kai Opaka kept it in a secret cave on Bajor with a cloaked entrance.

It has been discussed whether this unnamed Orb may be the same as the below Orb of Prophecy and Change. The latter is in Bajoran hands again as soon as 2370, prior to the peace treaty with the Cardassians of 2371. Since the peace treaty explicitly does not resolve the issue of the return of the Orbs, we may infer that no Orb has been given back until then. So it seems the unnamed Orb in "Emissary" has to be the same as the Orb of Prophecy and Change. However, the first provides visions of the past (at least at the two occasions it was seen in "Emissary"), while the latter always allows to look into the future. The first is green, the latter is quite consistently blue. Hence, the two are most likely not identical.

This is one of the original nine Orbs, the third of nine to appear on Bajor. The orb is colored blue. It provides visions of the future, often so powerful that exposure to the Orb is considered harmful.

Third Orb in DS9: "The Circle"

Third Orb in DS9: "The Collaborator"

As it is probably not identical to the unnamed Orb in "Emissary", the Orb of Prophecy and Change may have found its way back to Bajor in a similar fashion as the Orb of Wisdom, involving a third party.

It is curious that the Intendant and Mirror Bareil attempt to steal an artifact that may be completely worthless in their Mirror Universe, because they can't be sure whether the Prophets exist in the Mirror Universe likewise, or whether our universe's Prophets' power extends there.

It is unknown why the Orb of Prophecy and Change is transferred from the monastery to the temple on Deep Space 9, only to be replaced by the Orb of Contemplation some time prior to "Tears of the Prophets".

This is one of the original nine Orbs. The Orb's color is purple. It was confiscated by the Cardassians and taken away from Bajor prior to 2369.

This is one of the original nine Orbs. It allows to travel through time. Its color is purple. It was confiscated by the Cardassians and taken away from Bajor prior to 2369.

Orb of Time in DS9: "Trials and Tribble-ations"

Orb of Time in DS9: "Trials and Tribble-ations"

Orb of Time in DS9: "Wrongs Darker than Death or Night"

Orb of Time in DS9: "Wrongs Darker than Death or Night"

"Wrongs Darker than Death or Night" seems to be the only time that we clearly see the rear side of the Orb casing with essentially flush insets in the side walls instead of the convex windows.

This is one of the original nine Orbs. Its color is green.

Orb of Contemplation in DS9: "Tears of the Prophets"
Odo asks Kira,"Is this the Orb of Contemplation?", so it must have just been transferred to the station. Though it is never mentioned, we can assume that this Orb was confiscated by the Cardassians as well, taken away from Bajor prior to 2369 and returned most likely some time after the peace treaty of 2371 but before the Dominion War. Or could this be the unnamed Orb shown in "Emissary", whose color is green as well and which was shown initiating some kind of contemplation?

Orb of the Emissary (tenth Orb)

This is not one of the original nine Orbs. The existence of the Orb of the Emissary was unknown to the Bajorans until 2375. It is colored blue.

Orb of the Emissary in DS9: "Shadows and Symbols"

Orb of the Emissary in DS9: "Shadows and Symbols"

It is not explicitly stated, but we can take for granted that Sisko takes the Orb to Bajor.

An orb fragment is embedded in the bracelet of the Sirah, the leader and "storyteller" of a small Bajoran village. The Sirah uses the power of the Orb to unite the village against the Dal'Rok, a creature that is actually the manifestation of negative thoughts in the village (DS9: "The Storyteller").

Orb fragment in DS9: "The Storyteller"

It seems that this fragment belongs to a still existing Orb, because in "Emissary" it does not sound like one of them was purposely or accidentally shattered.

Most of the images are taken from TrekCore, some additional material has been provided by Jörg. I found various useful information, especially about the Orb in "Emissary", at Memory Alpha. Thanks to Florian Haag for a hint about the rear side of the Orb casing.