During the three seasons of TOS, James T. Kirk repeatedly gets himself into old-fashioned brawls, in which he winds up with a torn shirt several times. In addition, we can see him quite often without a shirt (in scenes involving violence just as well as casually), perhaps more often than all other principal male characters of all Star Trek series combined. This looks like a continued effort to underline his manliness. But judge for yourself.

Where No Man Has Gone Before

Kirk gets his old-style shirt ripped in his fight with Gary Mitchell, who has acquired god-like powers.

Ripped shirt in TOS: "Where No Man Has Gone Before"

Ripped shirt in TOS: "Where No Man Has Gone Before"

Usually hyposprays are injected through the clothing. For some reason Dr. McCoy thinks it is a good idea to rip Kirk's shirt open, which he accomplishes with astonishing ease. The fabric obviously wasn't improved since the previous uniform shirts.

The shoulder zipper of Kirk's shirt opens during his struggle with the "Onlies", the long-lived children on Miri's world. He doesn't mind closing it, obviously because it is the least of his problems. Kirk eventually tears the sleeves open, in order to demonstrate that he too suffers from the illness that has struck the planet. He may have considered that more dramatic than simply rolling up the sleeves.

Ben Finney faked his own death and evidence that Kirk abandoned him, in the hope of getting Kirk convicted. A fierce fight ensues as Kirk find's Finney's hiding place in the engineering section of the Enterprise. The only victim is Kirk's shirt.

On the Amusement Park Planet, Kirk encounters his old nemesis from the Academy, an immature cadet named Finnegan who is always out for a fist fight. This leaves Kirk's shirt in a total mess.

We can note that the damage pattern in "Shore Leave" is the very same as in "Court Martial". Neither episode shows how the shirt is actually ripped open (for which a couple of shirts would have to be thoroughly prepared). So irrespective of the order in which the two episodes were filmed (Court Martial was likely the first one, in early October 1966), Kirk wore the very same ripped shirt on both occasions!

Also, there is a continuity error because in the wide shot of Kirk (stunt double) lying on the ground we can see the shirt still intact. In the following close shot of Kirk (Shatner), two seconds later and still in the same position, the shirt is torn without Finnegan having anything to do with it.

Kirk is forced to fight against Spock in the old koon-ut-kal-if-fee ritual. In the course of the fight, Spock hits Kirk with the Lirpa and slices through his shirt into his chest.

The Gamesters of Triskelion

Kirk, Uhura and Chekov are kidnapped by three alien brains, who let slaves fight against each other for their amusement. It is no surprise that his shirt doesn't survive it. He eventually takes off the battered shirt (see below).

Ripped shirt in TOS: "The Gamesters of Triskelion"

Kirk is in sickbay for a routine medical exam. Topless, of course. He then leaves sickbay and walks through the corridor, without bothering to put on his shirt again.

Shirtless in TOS: "The Corbomite Maneuver"

Shirtless in TOS: "The Corbomite Maneuver"

"Evil" Kirk takes a couple of big gulps from the bottle of Saurian brandy and then feels like taking his shirt off.

Shirtless in TOS: "The Enemy Within"

We can see Kirk without a shirt in the ship's gym, trying to teach young Charlie what it means to be a man.

What are Little Girls Made of?

Kirk has to take off his shirt and his pants to be scanned, in order to create a mechanical duplicate of him. This may be the only time we can see Kirk's bare feet.

Shirtless in TOS: "What are Little Girls Made of?"

Shirtless in TOS: "The Deadly Years"

A shirtless appearance underlines Kirk's vitality before his rapid aging process kicks in.

Kirk's chest is exposed on two unrelated occasions in this episode. The first time we see him shirtless is when Kirk receives a call while getting dressed again after disposing of his dress uniform. The second time is after the knife attack on him, with a bandage around his chest.

Shirtless in TOS: "Journey to Babel"

Shirtless in TOS: "Journey to Babel"

The native clothing that Kirk and McCoy are wearing on their visit to Tyree's planet barely covers the chest. We see Kirk's chest fully exposed after he has been attacked by a Mugato and Nona takes care of him.

Shirtless in TOS: "The Gamesters of Triskelion"

The Gamesters of Triskelion

After getting his shirt ripped (see above), Kirk eventually removes it altogether and only keeps the harness.

After an attempt to pass as Nazis, Kirk and Spock are captured and apparently tortured. This is the only time in TOS we can see Spock's bare chest.

Shirtless in TOS: "Patterns of Force"

Shirtless in TOS: "Patterns of Force"

After some time on the planet with the Native American Indians, "Kirok" disposes of his Starfleet uniform and dresses like his new people. At one point we can see him without a shirt, together with Miramanee.

Shirtless in TOS: "The Paradise Syndrome"

Shirtless in TOS: "The Empath"

This episode has the scenes with the arguably most graphic violence in TOS. In one scene we can see Kirk dangling from the ceiling, without a shirt.

The inhabitants of Platonius force Kirk and Spock to wear clothing inspired by ancient Greece. Note that Kirk's chest is half exposed, while Spock's is covered.

Janice Lester is in Kirk's body when McCoy orders him to report for a medical exam because of his (actually her) "emotional instability and erratic mental attitudes". In a way, this is the only topless woman we ever see on Star Trek.

We can see how Kirk's pants get ripped in his fight against the representatives of evil, but this obviously isn't intentional. 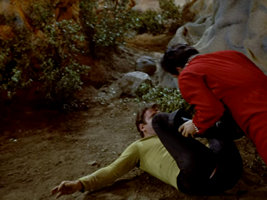 The alternate Kirk has his trouble with ripped shirts as well, as can be seen after his encounter with a rather easily offended alien species at the beginning of "Star Trek Beyond". Kirk notes that this happened "again". Fortunately he still has many spare shirts in his closet (although, in his universe, replicating a new one should be no trouble at all).

Ripped shirt in "Star Trek Beyond"

Kirk and his spare shirts in "Star Trek Beyond"

All screen caps are from TrekCore. Thanks to Therese Bohn for the hint about "The Deadly Years" and to Stephen LeBlanc for a correction about "What are Little Girls Made of?".