The Trophies in Picard's Quantum Archive

Trophies Visible in the EpisodeUnseen Trophies

Many awards, diplomas and other memorabilia can be seen stored in Picard's quantum archive room in PIC: "Remembrance". On the right wall, below the "Captain Picard Day" banner, there are several shelves with various trophies presented to Picard over the course of his career. Twelve trophies were on display at the various Picard exhibitions in the summer of 2019. Almost all of these actually made it into the episode and can be visually identified. There are also some unknown trophies on screen that were not shown an the exhibitions.

The trophies are seen in two shots in PIC: "Remembrance". One shot shows the camera pan from left to right to focus on the "Captain Picard Day" banner. The second shot reveals the whole archive as Picard moves towards the replicator/transporter console. Some of the trophies are also visible in a behind-the-scenes shot in the Ready Room episode for "Remembrance". 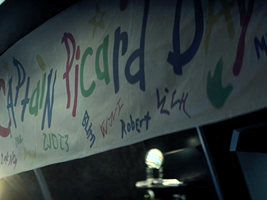 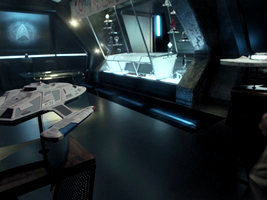 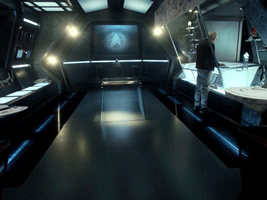 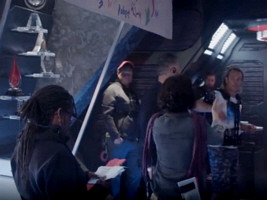 The trophies can be grouped into two clusters. The first one is on the left side (further in the background) of the replicator/transporter that produces Data's painting, labeled as #1 to #8. The second cluster is on the right side (closer to the camera), labeled as #9 to #15. One more trophy on the right side (#16) can be identified in the Ready Room episode for "Remembrance".

Trophies Visible in the Episode

A glass ball with differently colored helices embedded on the inside. Labeled "Klingon Planetary Humanitarian Award to Jean-Luc Picard for his exemplary leadership 2355".

This is a strange choice of a name for a Klingon award in consideration of Azetbur's statement "'Human rights.' Why the very name is racist." in "Star Trek VI: The Undiscovered Country".

"An award from the Klingons for his leadership skills"

The trophy incorporates Vulcan writing and the IDIC, "Jean-Luc Picard" being the only writing in Latin letters. It is one of three awards not made from glass or plexiglass.

Unnamed Vulcan award
(photo by TrekCore)
Caption at the exhibition:

The award has the shape of a stylized phoenix and includes the depiction of a phoenix on both sides of the inscription. It is labeled "Rising Phoenix Award - Honorable Jean-Luc Picard - Planet Klingon Assembly - 2367".

The Klingons obviously bought the trophy at a gift shop in Phoenix, Arizona.

Rising Phoenix Award
(photo by TrekCore)
Caption at the exhibition:

The trophy consists of an Earth globe, on a base that includes the Vulcan IDIC. It is labeled "Vulcan Crystal Planet Award in honor of Captain Jean-Luc Picard - Exemplary service for peace negotiations 2368".

Crystal Planet Award
(photo by TrekCore)
Caption at the exhibition:

5 The Circle of Galaxies

This is a glass goblet with an Earth map. Its inscription is as follows: "Circle of Galaxies *** 'The whole of humanity will reach maturity and wisdom on the day that it begins not just to tolerate but to take delight in the differences.' - Captain Jean-Luc Picard Exemplifies a Mature Human - 2375". This is a famous quote by Gene Roddenberry.

Circle of Galaxies (right background)
(photo by TrekCore)
Caption at the exhibition:

"The Circle of Galaxies Award"

The award consists of a big blue diamond atop an angular plexiglass column with the IDIC symbol. On its base, we can read: "Vulcan Dignified Person Awarded to Captain Jean-Luc Picard 2380".

Dignified Person Award
(photo by TrekCore)
Caption at the exhibition:

This trophy includes Bajoran writing and the Bajoran logo. Only the tip of the Bajoran logo is barely seen in the episode. "Picard" is the only writing in Latin letters. It is one of three awards not made from glass or plexiglass.

Bajoran award
(photo by TrekCore)
Caption at the exhibition:

This award is seen in "Remembrance" but cannot identified. It is made from glass.

9 Galaxy of Planets and Suns

The trophy consists of an Earth globe and includes the Federation logo on its base. It is labeled: "Jean-Luc Picard Annual Fundraiser Galaxy of Planets and Suns 2360".

Galaxy of Planets and Suns
(photo by TrekCore)
Caption at the exhibition:

A triangular trophy with the Andorian emblem and Andorian writing. One of three logos not made from glass or plexiglass. Its inscription reads: "Presented to Jean-Luc Picard with Great respect from the planet and citizens of ANDORIA".

Andorian award
(photo by TrekCore)
Caption at the exhibition:

This award is seen in "Remembrance" but cannot identified. Black base, red tear shaped trophy made from glass.

This award is seen in "Remembrance" but cannot identified. Black base, made from glass.

The inscription can be seen up close in the Ready Room episode and reads: "Children of Tama - Thank - Jean-Luc Picard - 'He who was my companion through adventure and hardship is gone forever' - 2355". This quote is from the Gilgamesh epos and was previously quoted by Picard in TNG: "Darmok".

The date of 2355 is an error. Jean-Luc Picard encountered the Tamarians for the very first time in 2368.

A flame-shaped glass sculpture. The award is inscribed: "Betazoid Loyalties -go to- Jean-Luc Picard - for his Healing and Enveloping New Nations - 2350".

This is the first appearance of a Betazoid logo. The intersecting rings were originally a fan design that was apparently canonized by accident, through a web search. The logo was created by David Bilic aka Zeleni in 2007 for a fan-based game called "Birth of the Federation 2".

Betazoid Loyalties Award
(photo by TrekCore)
Caption at the exhibition:

"The Betazoid Loyalties award for his work in assisting developing worlds"

This award is seen in "Remembrance" but cannot identified. Made from glass.

This award does not appear in PIC: "Remembrance" and is only visible in the Ready Room episode. The plexiglass plaque is inscribed: "Jean-Luc Picard - Graduate of Starfleet Academy - Class of 2327". It features the Starfleet Academy logo, annoyingly with the wrong Latin quote once again that we thought was eradicated once and for all.

Sadly this award did not make it on screen. Picard serving on the USS Reliant is from the extended version of TNG: "The Measure of a Man". In PIC: "Broken Pieces", Picard also refers to his time on the ship. The inscription reads: "Captain Jean-Luc Picard - Distinguished Record of Service on U.S.S. Reliant 2364".

"A trophy received for his service aboard the U.S.S. Reliant early in his career and later helping with its decommissioning while awaiting completion of the U.S.S. Enterprise NCC-1701-D in 2364"

Picard's Shakespeare Books - investigation of the books in the ready room and in his quarters, incl. identification of the pages

All screen caps and award photos kindly provided by TrekCore.