Sexual dimorphism (see the definition at Wikipedia) denotes a systematic dissimilarity between individuals of different sex in the same species, beyond the obvious difference of male and female sex organs. The phenomenon is quite common in Earth's fauna. In many species of birds the male form bears a more colorful plumage than the female form, the peacock being a prime example. Male lions have an ample mane unlike the females. Humans are subject to sexual dimorphism as well. Human males are taller and stronger on average, and they typically have more body hair.

It is plausible that the average males of most humanoid alien species in Star Trek are taller than the women, as they are played by human actors or actresses, respectively. This kind of sexual dimorphism is tacitly assumed to be a common trait in the following. However, there are a couple of species with more striking differences between males and females.

Cardassian women differ from men in that the "spoon" on their forehead is bluish, as is one bone segment on each side of their necks. This difference is visible already on the first Cardassian woman, Gul Ocett, who appears in TNG: "The Chase". The trait is maintained consistently since that time, for instance for Natima Lang in DS9: "Profit and Loss". Seska, in her half-restored Cardassian form, sports a blue "spoon" as well.

On the other hand, Dukat's daughter Tora Ziyal, who is half Bajoran, does not have this skin coloring in any of her incarnations (she was played by three different actresses). The blue color is also missing in the "spoon" of the young girl Asha in DS9: "Cardassians". So if it is not just cosmetic anyway (we wouldn't expect the orphan girl to wear make-up), we may assume that only adult Cardassian women have this feature.

The blue markings, especially the one on the spoon, may be the Cardassian equivalent to eye shadow. Michael Westmore's original intent would allow this interpretation, however, the perpetuity of the make-up on Cardassian women suggests that it is indeed a natural feature. Excerpt from the DS9 season 2 DVD box, special features: "To give them [female Cardassians] something a little different, because at the beginning we thought 'How you gonna tell them apart if they're not wearing a dress', was to take and paint the center of their spoons at the center of their forehead, to paint it blue. And then we picked out the second or third rung down on their neckpiece and that was also painted blue. So all female Cardassians always had those blue markings."

Ferengi females sport smaller ears than males (as the men say, females "don't have the lobes"). This difference is systematic and is a distinguishing mark that requires Quark to undergo a medical treatment in order to pass as a woman in DS9: "Profit and Lace". Pel from DS9: "Rules of Acquisition" is an example of a true Ferengi woman with the typical small ears. She poses as a man using prosthetic ear pieces. Quark's mother Ishka and Grand Nagus Zek demonstrate that the difference is still present among elderly Ferengi. For some reason we never see any other Ferengi women. ;-) 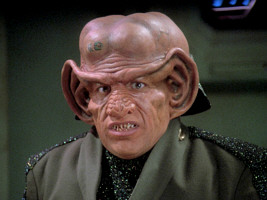 The Rutians appear in TNG: "The High Ground". Their look is identical to that of humans, except for a conspicuous sexual dimorphism. All women without exception have red hair with a dark streak, and all men sport a gray, skunk-like streak in their otherwise dark hair. These features can hardly be a fashion or even a totalitarian uniformity, considering they can be found among the security forces and the Ansata terrorists alike.

Rutian male and female, police, in TNG: "The High Ground"

There is a sexual dimorphism between Voth males and females too. The nose bridges of Voth men like Gegen and Veer are smooth, whereas the female Minister Odala as well as Gegen's daughter Frola both have a protruding bone above their noses. The dissimilarity of Frola and Gegen indicates that it is most likely not a matter of different Voth sub-species.

We can see two female Vaadwaur in VOY: "Dragon's Teeth", Jisa and an unnamed woman. They have considerably smaller neck lobes than the male members of their species like Gedrin or Gaul.

This species from ENT: "Cogenitor" is a special case, as the Vissians consist of three sexes: the male, the female and the cogenitor. A distinction of the three genders is possible comparing the bone bulges next to their eyes. Vissian men like Drennik (played by the late Andreas Katsulas) have two clearly discernible cross-ribbed bulges to the left and to the right of their eyes. These bulges are less prominent on the Vissian women. Here it looks more like one coalesced bump with just a slight trench. The two bulges are still less pronounced on the progenitors, and the cross ribs are entirely missing.

Male members of this race appeared as Dr. Sevrin in TOS: "The Way to Eden" and Crewman T'Lor in DS9: "The Ship". In addition, Zora, a member of the "evil team" created by the Excalbians, was said to have performed cruel experiments on Tiburon tribes in TOS: "The Savage Garden". The two men have the conspicuous cauliflower ears in common, in spite of the 30 years between the two episodes. Yet, T'Lor sports a slight ridge running across his forehead that the equally bald Dr. Sevrin doesn't have. While we can't tell whether Zora has cauliflower ears as well, she has lots of bushy hair, extremely long eyebrows and pronounced wrinkles below her eyes. This may be a considerable sexual dimorphism, but she could also have been an offworlder who came to Tiburon for her despicable experiments. Since the recreations of the Excalbians were crude (like that of Kahless), the real Zora may have looked very different anyway. 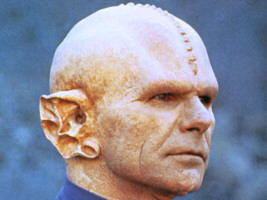 It is a bit controversial whether the bigger Aquatics are the male or the female members of their species. The Star Trek Communicator, Issue 149, identifies the larger form with its more pronounced and more human-like facial features as the males. However, when the female Kiaphet Amman'sor speaks to the other Xindi species in ENT: "The Council", the camera shows such an Aquatic that was supposed to be male. In any case, the dissimilarity between the round faces of one sex and the pronounced humanoid features of the other one establishes a sexual dimorphism.

Orion males seem to be exceptionally tall and muscular, and they lack hair on their heads (ENT: "Borderland, "Bound"). The females, in contrast, are quite graceful and they have lush dark hair. At least this is what we can tell from their appearances in Enterprise. During TOS we could see just two Orion females, namely Vina as a slave girl in "The Cage"/"The Menagerie" and Marta in "Whom Gods Destroy". The only male Orion in TOS was Thelev in TOS: "Journey to Babel", but he was disguised as an Andorian. His figure didn't look anything like that of the ENT Orions, but maybe this was just the reason why he was chosen to pose as an Andorian, without undergoing delicate medical procedures (the antennae were just glued on). Overall, the evidence is not quite sufficient to confirm a natural sexual dimorphism in the Orion species. It may be a cultural matter that tall men with shaved heads may rise to important positions, while attractive women are likely being sold on slave markets (a position from which they allegedly use pheromones to actually dominate their "owners", as we learn in ENT: "Bound"). 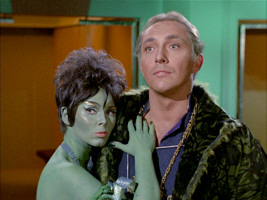 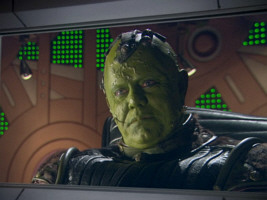 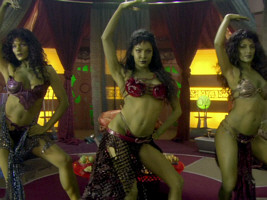 The people of Angel I in TNG: "Angel One" are indistinguishable from humans. But their women are taller on average than their men, a dimorphism which is mirrored in the matriarchal society on the planet.

Inhabitants of Angel I in TNG: "Angel One"

It also appears that Andorian females are generally taller than males. At any rate the Andorian women that appeared on Star Trek Enterprise like Tarah (ENT: "Cease Fire") and Talas (ENT: "Babel One") are unusually tall unlike the men. Tarah was played by Suzie Plakson who had previously appeared as Dr. Selar and as K'Ehleyr and who measures 1.87m.

Some species don't allow a distinction of males and females as the inherent difference between male and female human actors is purposely blurred instead of emphasized.

This humanoid race from TNG: "The Outcast" looks androgynous and is described as being asexual. All J'naii in the episode were played by women in order not to establish a visual distinction of male and female actors.

J'naii in TNG: "The Outcast"

The Srivani appear in VOY: "Scientific Method" (their name was not mentioned in the episode but is from the screenplay). Like the J'naii, all Srivani were played by women with a noticeably androgynous look. Although not expressly mentioned, the Srivani don't seem to have a different sexes or at least a visual distinction of sexes. Alternatively, the "research" team may be all-female.

Benzites are another possible exception along these lines. All Benzites from the same geostructure look alike, as Mendon told Wesley in TNG: "A Matter of Honor". Wesley had mistakenly assumed he was Mordock, the Benzite he had met at the Academy exam in TNG: "Coming of Age". This uniform look may include female Benzites. In any case the make-up is the same for male and female Benzites (maybe because there is just one mask in Westmore's studio), although the complexion is subject to change. On the other hand, with Hoya in DS9: "The Ship" we could see only a single female member of this species (or a Benzite of uncertain sex played by an actress) who may not be representative. Curiously in the German dubbing Hoya has a male voice, possibly owing to a simple oversight. In DS9: "Blaze of Glory" and "You Are Cordially Invited" we briefly see two more Benzites, most likely again with the very same mask.

Galleries - DS9 Recurring Characters - the good, the bad and the Ferengi