Budget restrictions often don't allow the creation of new graphics for every episode. This is why we see many displays or labels again, often with a completely different new meaning. Here are a couple of examples of still and animated graphics. Please note that every statement made here should be taken with a grain of salt. There is no need to seek for explanations, as we are not supposed to recognize re-used graphics or stock footage.

The planetary data on Exo III from TOS: "What are Little Girls Made of?" reappears in the sickbay of the USS Defiant in TOS: "The Tholian Web".

Exo III graphic in TOS: "What are Little Girls Made of?"

Many early LCARS graphics premiered in TNG: "The Naked Now". These include vessel diagrams, symbols, star charts and perhaps most notably "The Great Bird of the Galaxy", Gene Roddenberry's head on a parrot's body. Several of the graphics are not original but taken from publications such as the Spaceflight Chronology (star charts) or from FASA manuals (non-canon ships). 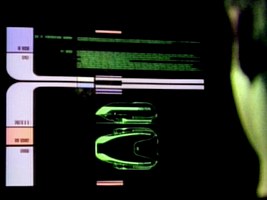 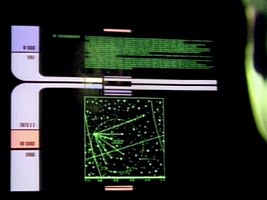 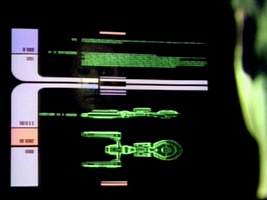 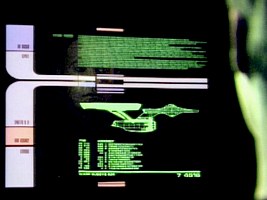 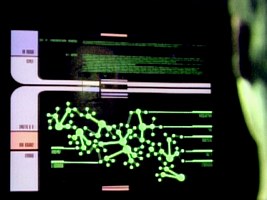 The graphics reappear in "The Last Outpost", "Datalore" (partially) and "Conspiracy". The Psi 2000 virus graphics can be seen again in the sickbay lab in "Home Soil" and in sickbay in "Man of the People".

The graphic of the Maxia Zeta star system from TNG: "The Battle" was slightly modified and appeared again in several episodes. It represented an unnamed star system in "Datalore", the Mira system in "Conspiracy" and the Tau Cygna system in "The Ensigns of Command". 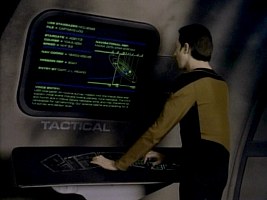 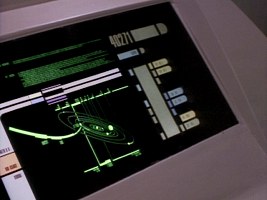 The green graphic of Maxia Zeta IV in TNG: "The Battle" previously appeared in white on the bridge of the Enterprise in "The Last Outpost", where it depicted Delphi Ardu IV. The green version was later seen in "Conspiracy" when Data reviewed library computer data. The white version reappeared in "Too Short a Season" and "Home Soil". 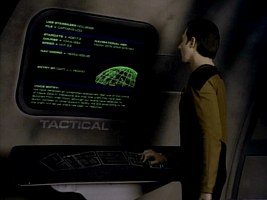 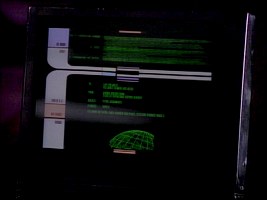 A graphic of the tactical display in "The Battle" too returns in "Conspiracy". It reappears earlier in Data's quarters in "Datalore" on an LCARS display above Data's desk. This graphic would be located there until the end of the series. 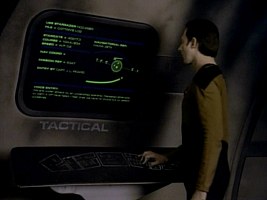 Tactical graphic in TNG: "The Battle" 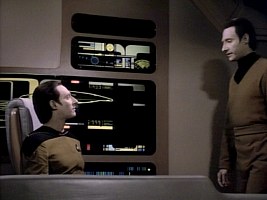 The star chart behind Dexter Remmick in TNG: "Conspiracy" was created by Mike Okuda. It featured all planets visited by the original USS Enterprise in The Original Series and The Animated Series. The same star chart appeared in many later episodes. It was seen in the court room on Starbase 173 in "The Measure of a Man" and the tactical room aboard the Enterprise-D in "The Emissary". It was also seen in the tactical laboratory of the USS Enterprise-D in "The Mind's Eye" and in the ship's engineering laboratory in "The Game". It also appeared in the classroom aboard Deep Space 9, featuring the heading "The Explored Galaxy", in "In the Hands of the Prophets" and "Cardassians". In addition to episodic Star Trek, it could be seen in Captain Kirk's quarters aboard the USS Enterprise-A in "Star Trek VI: The Undiscovered Country". Finally, the chart was also seen in the pilot episode of the British Science Fiction series "The Sarah Jane Adventures" in the eponymous main character's attic. 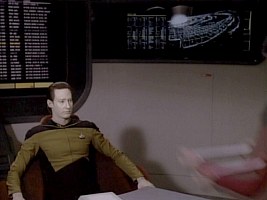 Star chart in TNG: "The Measure of a Man" 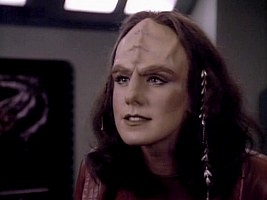 Star chart in TNG: "The Emissary" 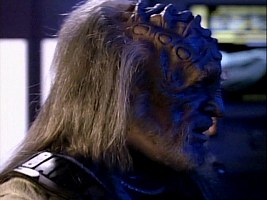 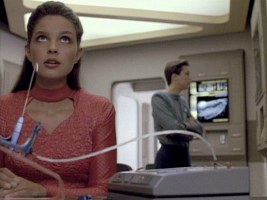 Star chart in TNG: "The Game" 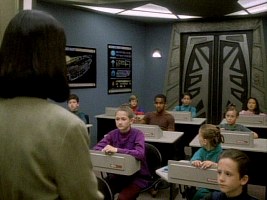 Star chart in TNG: "In the Hands of the Prophets" 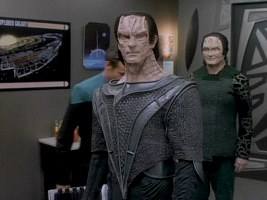 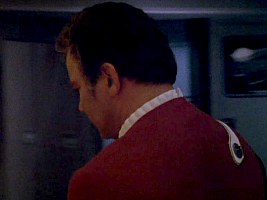 Vidiian letters can be seen in Noss's binoculars and on the Talaxian Collected Works of Jirex and finally even in the Alpha Quadrant on the planet Dekendi.

One specific logo-like pattern appears several times in DS9's fifth and sixth seasons, near the doors of the Dominion internment camp in "In Purgatory's Shadow" and "By Inferno's Light", on Dr. Giger's "cellular regeneration and entertainment chamber" in "In the Cards" and finally on the docking hatch of Zek's Ferengi shuttle in "Profit and Lace".

Giger's symbol in DS9: "In the Cards"

Several parts of the animated Genesis effect from "Star Trek: The Wrath of Khan" and other graphics from this movie, as well as the "calm water" shot from the time travel sequence in "Star Trek: The Voyage Home" are incorporated into the psychological exam in TNG: "The Schizoid Man". We can also see a brief shot of the formation of the Genesis planet in TNG: "Shades of Gray". 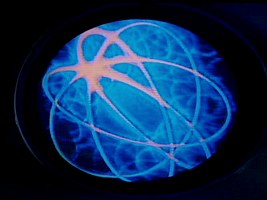 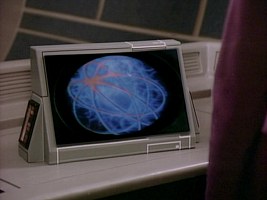 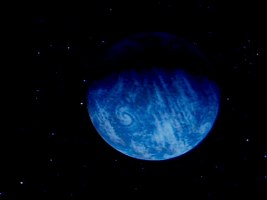 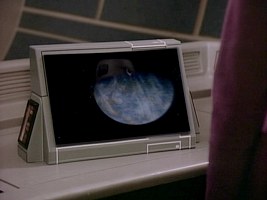 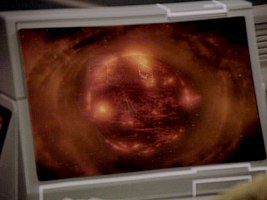 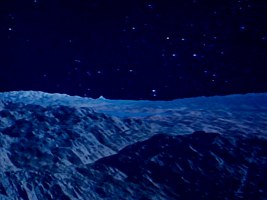 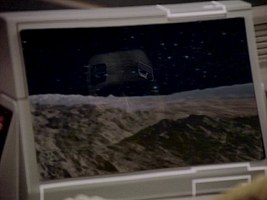 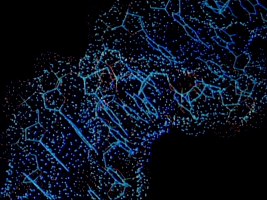 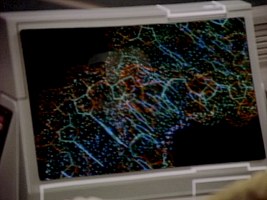 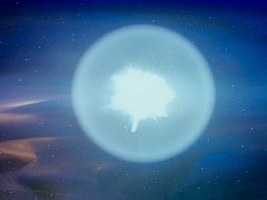 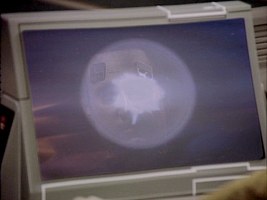 The Defiant encounters the remains of a Cardassian vessel in DS9: "Way of the Warrior". The very same debris field can be seen once again as Neelix's scrapyard in VOY: "Caretaker".

Cardassian debris in DS9: "Way of the Warrior"

The plasma drift in VOY: "Deadlock" and the nebula in VOY: "Hunters" are the same visual effect sequence.

Two nebulae, as visible from the Ocampa system and from the Hanon system, are identical.

Observations in TNG: "The Naked Now"

Observations in TNG: "The Battle"

Observations in TNG: "The Schizoid Man"

Thanks to AJ Halliwell for the hint about the Vidiian scripture in "Stigma".