Many props of Star Trek were later modified or even recycled without changes to represent equipment for a different purpose or of another civilization. Here are quite a few examples of engineering tools. Please note that every statement made here should be taken with a grain of salt. There is no need to seek for explanations. Certainly we are not supposed to watch closely enough to notice that Geordi's tools are occasionally used in sickbay or even in Mr. Mot's salon.

The original communicator from "The Cage" was rebuilt to a device with big colorful buttons that appeared as a scanner in TOS: "That Which Survives" and, of course, as Spock's famous remote control in TOS: "Spock's Brain".

Communicator in "The Cage"

Scanner in TOS: "That Which Survives"

The laser beacon from TOS: "The Squire of Gothos" reappears among Kirk's tools in "The Doomsday Machine".

Laser beacon in TOS: "The Squire of Gothos"

This cylindrical scanner originally appears in "Star Trek III: The Search for Spock", where it is used by Sulu more like a weapon, to short-circuit the turbolift controls of the Starbase brig. Beginning with "Datalore", the scanner appears in countless TNG episodes. The prop is later identified as a "sequencer" in "In Theory". 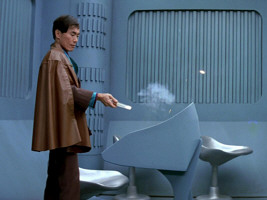 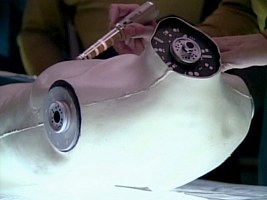 A scanner that Geordi was working with more than once on TNG suddenly appears as a medical device in the hands of Nurse Ogawa in TNG: "Identity Crisis". But even Dr. Crusher was occasionally mistaken about the instruments she was using... 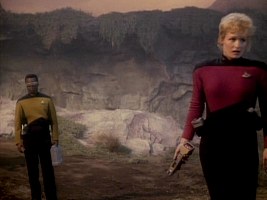 Scanner in TNG: "The Best of Both Worlds I" 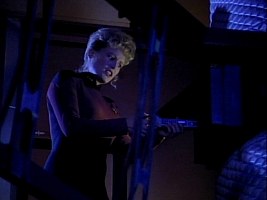 Scanner in TNG: "The Best of Both Worlds II"

The first time this gadget appears, it is a geological tool. Davies employs it in TNG: "Pen Pals" to crack a rock sample behind a glass cover. We can also see it as a scanner in TNG: "Déjà Q" and in "Hollow Pursuits" and even as a Borg device in "The Best of Both Worlds, Part II". A few years later the same prop appears as a medical device of the Trill in DS9: "Equilibrium". Still later it forms a part of the Klingon space station at Ty'Gokor in DS9: "Apocalypse Rising". We can't make it out on the screen capture but the prop was definitely incorporated into the studio model. Furthermore we can see it inside a self-replicating mine in DS9: "A Call to Arms". The prop also belongs to Dr. Bashir's inventory in DS9: "Far Beyond the Stars". He scans Sisko's head after his hallucinations of Ben Russell. Well, if the captain had kidney stones the original rock cracker might be just the right instrument, but then we would have to doubt Bashir's knowledge of anatomy. :-) The prop is also visible in the background of the Phoenix cockpit in "Star Trek: First Contact".

Medical device in DS9: "Far Beyond the Stars"

The prop is displayed on a screen in ENT: "Anomaly", here as a Xindi device. It seems that the right half of the depicted device is identical to the side view from The Art of Star Trek, whereas the left half has been created by mirroring the image and changing a couple of details to break up the symmetry. Finally we can see the prop on the desk of John Frederick Paxton (Peter Weller) in ENT: "Demons".

The prop was originally seen as the oscillation overthruster in "The Adventures of Buckaroo Banzai Across the Eighth Dimension", the movie which has been the subject of various in-jokes by the Star Trek Art Department and in which Peter Weller played the eponymous role. 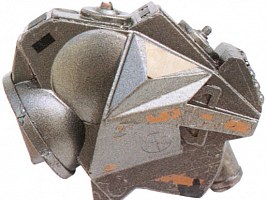 The prop, close view
(The Art of Star Trek)

The prop in "Buckaroo Banzai"

Wesley shows Salia a superconducting magnet SCM model 3 in TNG: "The Dauphin". The same component can be seen in Riker's quarters in TNG: "Conundrum" and in the hands of the aliens in "Schisms". Years later the prop is prominently featured as the Sikarian trajector matrix in VOY: "Prime Factors".

The old-fashioned looking scanner on Wesley's desk when he investigates the Nanites in TNG: "Evolution" reappears when his mother treats Scotty in "Relics". 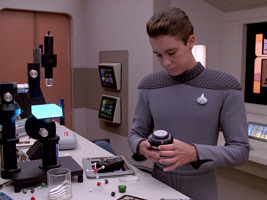 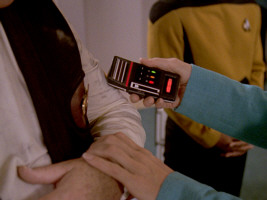 The phase discriminator from TNG: "Time's Arrow" that allows to enter the phase in which the Devidians exist reappears as some sort of scanner in B'Elanna's hands in VOY: "Tattoo".

A small sphere resembling a Death Star appears in the overhead neural interface that Barclay constructs in TNG: "The Nth Degree". Later, as something found in the debris of a Borg vessel, it is identified by Harry as an "autoregeneration unit" in VOY: "Dark Frontier". The device resurfaces as a Monean scanner in Rega's inventory in VOY: "Thirty Days" and also appears on Tash's station in VOY: "The Voyager Conspiracy". We can further see it in an unknown role in ENT: "Silent Enemy" when Reed and Tucker try to convince Archer to let them install the phase cannons. The device reappears on Enterprise in "Singularity".

A second Monean scanner appears in VOY: "Thirty Days". This device can be seen again in VOY: "Natural Law" when Seven of Nine uses it to deactivate the forcefield around the Ventu habitat.

All tools employed by the exocomp in TNG: "The Quality of Life" (4 different props) are re-used as various alien tools in later Star Trek episodes. The first, unnamed tool can be seen as a Sikarian scanner in the Voyager episode "Prime Factors". 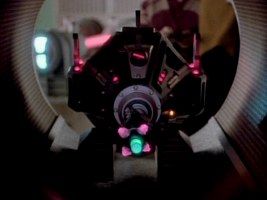 Exocomp tool #1 in TNG: "The Quality of Life" 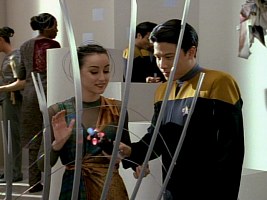 The second tool, a mode stabilizer, can be seen as an Entharan scanner in VOY: "Retrospect", a Borg scanner in "Dark Frontier", a Tellarite scanner in ENT: "Bounty" and as an Earth Starfleet tool in "Horizon". 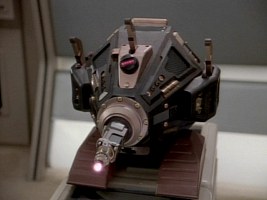 Exocomp tool #2 in TNG: "The Quality of Life" 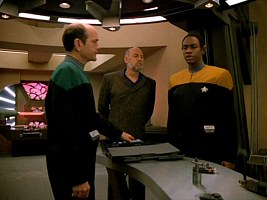 The same tool in VOY: "Retrospect" 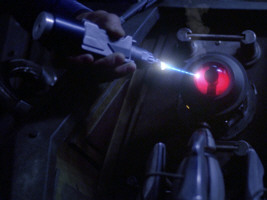 The same tool in ENT: "Bounty" 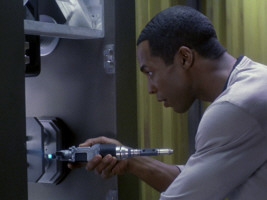 The same tool in ENT: "Horizon"

The next exocomp tool later appears as a Hirogen and alien medical tool in "The Killing Game" and "Repression", respectively. 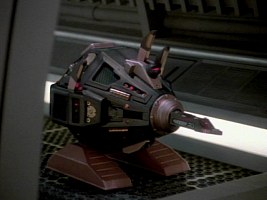 Exocomp tool #3 in TNG: "The Quality of Life" 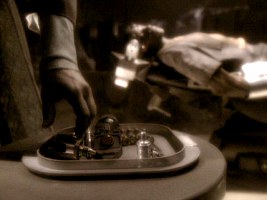 The same tool in VOY: "Repression"

The final tool used by the exocomps reappears many years later as a veridium injector in the Voyager episode "Drive". 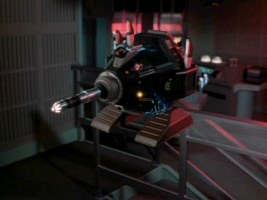 Exocomp tool #4 in TNG: "The Quality of Life" 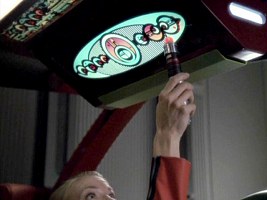 The same tool in VOY: "Drive"

This scanner undergoes a curious metamorphosis. After being used consistently as an engineering tool, the prop suddenly shows up as a hair dyer in Mr. Mot's hairdressing salon!

The weapon of the Anticans in TNG: "Lonely Among Us" appeared as a coil spanner in the Voyager episode "Meld". In later Voyager episodes ("Living Witness", "Drive", "Lineage"), this device was called a hyperspanner. It was also used by Gosheven to stun Data in TNG: "The Ensigns of Command". 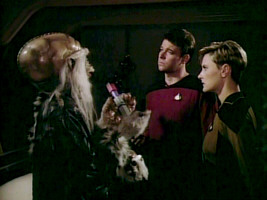 Antican weapon in TNG: "Lonely Among Us" 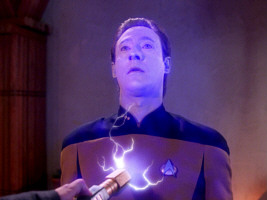 Gosheven's weapon in TNG: "The Ensigns of Command" 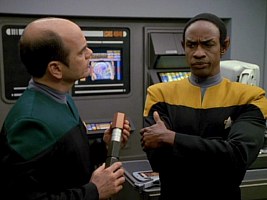 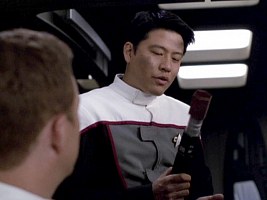 This prop is another multipurpose tool for use by physicians as well as engineers. Most often we can see the prop in engineering as some sort of scanner. But at least on one occasion Dr. Crusher uses the same instrument to scan tissue samples in TNG: "Aquiel" (just before the biomimetic fluid imitates the shape of her hand).

Engineering scanner in TNG: "Birthright I"

The scanner used by terrorist Neil in TNG: "Starship Mine" is later repurposed as a medical Trill scanner in DS9: "Equilibrium". 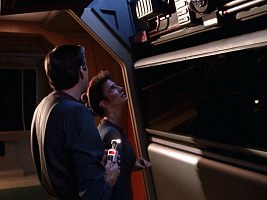 Engineering scanner in TNG: "Starship Mine" 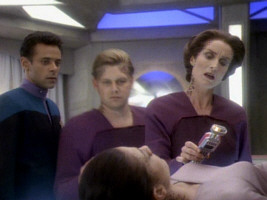 On the Enterprise-D the device used by Geordi to scan Data's head later becomes a medical device to heal wounds, probably a variant of a dermal regenerator. Quark, on the other hand, calls the same device a "laser scalpel" and keeps one behind his counter. He opens a stasis container with this tool. Voyager's Doctor owns such an instrument too. On one occasion it is a scanner, another time it acts as a scalpel again. The prop also appears in Voyager as a "type-4 microinducer" and as an "iso-modulator". These are obviously not intended to be medical tools.

This is yet another tool that undergoes a metamorphosis from an engineering to a medical device. In VOY: "Fair Trade" it can still be seen as a "gravimetric caliper" used by B'Elanna. In "Fury", we can see the prop in sickbay for the first time. In "Workforce I", the Doctor uses it to transform Chakotay into an alien.

Medical device in VOY: "Workforce I"

The microresonator that Chell has to use in VOY: "Learning Curve" to clean the transporter platform becomes a scanner to measure the purity of the tellerium in VOY: "Resistance".

The communication scrambler from VOY: "Dreadnought" will reappear in a totally different role, as the EMH backup module in VOY: "Living Witness".

A small brownish device was introduced in VOY: "Dark Frontier" as a biodampener. It appeared twice as a transport enhancer in the later Voyager episodes "Spirit Folk" and "Live Fast and Prosper", until it became an alien device on Star Trek Enterprise.

Vash's scanner from TNG: "Captain's Holiday" was later repainted black and appeared as a Romulan scanner in "The Next Phase" and as a Prytt scanner in "Attached". 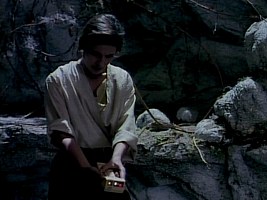 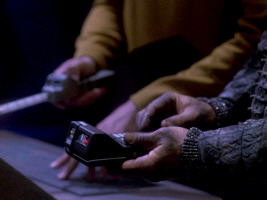 Romulan scanner in TNG: "The Next Phase" 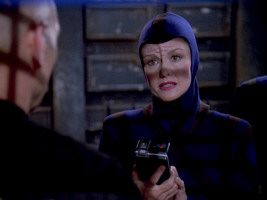 The Zibalian scanner from TNG: "The Most Toys" later appeared as a Kes scanner in "Attached". 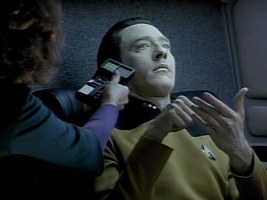 Zibalian scanner in TNG: "The Most Toys" 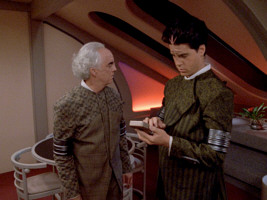 This boxy device started its life (at least, its Star Trek life) as a tissue scanner in TNG: "Suspicions" and later appeared as a Pralor device of unknown purpose in VOY: "Prototype". The prop was designed by Ed Kline, used to be available for rent from Modern Props and also appeared in "Men in Black".

The Banean brain scanner from VOY: "Ex Post Facto" reappears as an engineering tool of the Pralor in "Prototype". It is also seen as part of the Romulan torturing inventory in DS9: "Inter Arma Enim Silent Leges". The device was designed by Ed Kline, used to be available from Modern Props and also appeared in "Men in Black".

Origin of the prop
(Modern Props)

Another device of the Pralor in VOY: "Prototype", which is identified as a phase coil resonator, is identical to a Srivani instrument in VOY: "Scientific Method". The device also appears as a Hirogen scanner in VOY: "Flesh and Blood". This prop was also designed by Ed Kline, used to be available from Modern Props and appeared as a universal translator in "Men in Black".

Origin of the prop
(Modern Props)

An unspecified Pralor scanner from VOY: "Prototype" appears as a Srivani instrument in VOY: "Scientific Method" besides the phase coil resonator. Once again, Ed Kline designed the prop, it could be rented from Modern Props and appeared in "Men in Black".

For the sake of completeness, two more Pralor tools from VOY: "Prototype" were designed by Ed Kline. They could not be identified in other Trek episodes so far. One of them appeared in Babylon 5 as a Minbari weapon, one in MiB as an alien weapon.

Origin of the scanner
(Modern Props)

The Ferengi antimatter generator from VOY: "False Profits" and the Borg data node from "Dark Frontier" have the same black ribbed rubber cover.

"Steth" uses this tool to scan the coaxial warp drive of his ship in VOY: "Vis à Vis". In Voyager's seventh season, however, we can see how the Doctor scans hypospray pods with the same tool.

In VOY: "Jetrel" this prop represents a Haakonian scanner, owned by Jetrel. We can see it again in "Vis à Vis", this time as a Benthan coaxial induction drive. In VOY: "Living Witness", finally, it is a Kyrian scanner.

Some screen caps from TrekCore. Ivan Bozic and Jernej L. noticed the spherical device. Cardinal Biggles pointed us to the origin of the geological instrument in "Buckaroo Banzai". Michael Minnick found the re-use of the laser beacon and another one of the oscillation overthruster. Felix Ernie found out about the phase discriminator. Mark Beever spotted the reuse of Wesley's device from "Evolution".