Many props of Star Trek were later modified or even recycled without changes to represent equipment for a different purpose or of another civilization. Here are quite a few examples of medical instruments. Please note that every statement made here should be taken with a grain of salt. There is no need to seek for explanations. Certainly we are not supposed to watch closely enough to notice that Beverly's instruments occasionally show up in engineering.

This tool appeared as an engineering scanner in TOS: "Charlie X", then Kirk held it in "What are Little Girl Made of?", and finally it became a medical scanner (an anabolic protoplaser according to the Star Fleet Technical Manual) in "Space Seed". The protoplaser consistently shows up in sickbay from now. It can also be seen in "Star Trek: The Motion Picture" when Dr. Chapel treats Spock.

Scanner in TOS: "What are Little Girl Made of?"

Anabolic protoplaser in "Star Trek I"

The prop shown as Kivas Fajo's forcefield generator in TNG: "The Most Toys" has gone through quite a remarkable development. It was used as a medical instrument in a couple of later TNG episodes, each time in a slightly different role. Dr. Crusher used it to heal a torn ligament in TNG: "Conundrum". In TNG: "Starship Mine" she treated Picard's "nasty little cut" with it, but the patient didn't keep still. The treatment of Guinan with the device was most likely simulated, as was Guinan's tennis elbow in the first place. But regarding its previous appearances as a medical instrument it seemed like the right choice if it had been for real. In TNG: "Emergence" Beverly treated Deanna's small wound with the device. Only in TNG: "Ethics" the prop was used for a considerably different yet still medical purpose, to monitor a patient's condition.

Forcefield generator in TNG: "The Most Toys"

Medical scanner in TNG: "Starship Mine"

Scanner in VOY: "One Small Step"

Scanner in VOY: "The Voyager Conspiracy"

Scanner in VOY: "Body and Soul"

A Malcorian medical device from TNG: "First Contact" is later seen in Federation use in TNG: "Ethics", TNG: "Realm of Fear" (as a cardiostimulator) and VOY: "Alliances" (as a cortical stimulator). 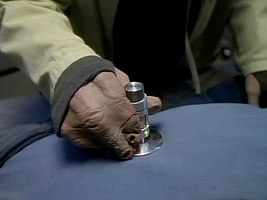 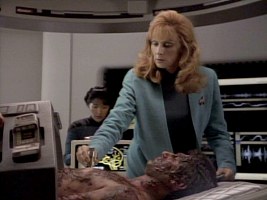 Cardiostimulator in TNG: "Realm of Fear" 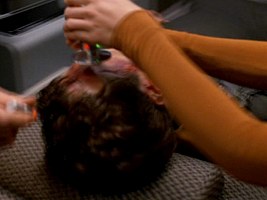 This prop has previously been used as a combination of a medical scanner and a dermal regenerator. But in TNG: "Phantasms" it serves to scan the structure of a knife blade.

Medical scanner in TNG: "The Defector"

A strange gadget of the TNG-Trills in TNG: "The Host" will later appear as the familiar dermal regenerator on DS9. The screenplay says about the Trill device that Odan uses it to "feed" the yet unknown symbiont with light.

Trill device in TNG: "The Host"

Dermal regenerator in DS9: "The Homecoming"

This is one more of several props that we may find in sickbay as well as in engineering. Dr. Crusher uses it as a laser scalpel and also as a dermal regenerator. The same prop can be found as a medical all-round instrument in Dr. Bashir's sickbay too. Here it acts as a medical scanner and also to open or to close wounds.

Laser scalpel in TNG: "The Host"

Medical device in DS9: "The Alternate"

Although a laser torch as in DS9: "Destiny" may work in a similar fashion as a medical scalpel, we wouldn't really expect the device to be that diverse.

In TNG: "Liaisons" a prop is shown as a restriction device that "will hold the bones in place, will let them knit." Picard has three fractured ribs. The same device is used by the Kazon on their training ground. It creates a forcefield that traps Janeway and the away team on the planet while they are searching Chakotay and the young Kar. We can also see the little disk as a part of the door opener in the orbital tether cabin in "Rise".

This segmented headset prop can be seen in so diversified functions that we can safely assume it must represent something different each time. It is meant to be an audio stimulator in DS9: "Babel"; when O'Brien begins to talk nonsense Bashir uses it to analyze his auditory sense. In DS9: "Duet" Bashir examines Aamin Marritza, who is suffering from the Kalla-Nohra Syndrome. In this test Bashir puts the device on Marritza's eyes. When the doctor lifts the scanner, Kira steps in and in a dramatic twist she recognizes the war criminal Gul Darhe'el, the man that Marritza pretends to be.

The headset also shows up in TNG: "Homeward", here obviously as a surgical instrument that transforms Worf's forehead into something Boraalan-looking. Finally we can see the prop in DS9: "Extreme Measures" as an engrammatic sensor. The prop was slightly modified for this purpose. New blinking add-ons were affixed to the two segments on either side of the central piece. The whole setup along with the computer is called a "multitronic engrammatic interpreter", while the scripts calls our prop just the "headset".

In TNG: "Ship in a Bottle" Barclay uses a small tool to work on the holographic circuits, which was originally used by Doctors Crusher and Pulaski as a medical device in several earlier episodes. 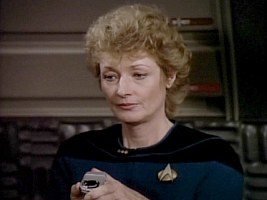 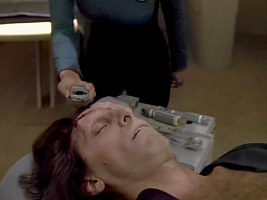 Medical device in TNG: "The Host" 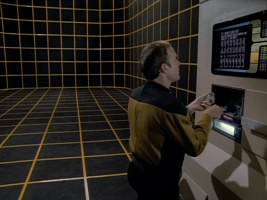 Holographic tool in TNG: "Ship in a Bottle"

This prop consistently serves as a medical scanner during early DS9. In DS9: "The Quickening" it gains particular importance as a "microcellular" scanner. But then the prop must have been mislabeled or stored in the wrong drawer. At latest since DS9: "Dr. Bashir, I Presume" it repeatedly shows up in the hands of engineers. It was modified with a black grip for later episodes.

Microcellular scanner in DS9: "The Quickening"

Engineering scanner in DS9: "Treachery, Faith and the Great River"

Finally, the tool shows up as an in-joke in PIC: "Stardust City Rag", in the "Red Bolian" holographic advertisement. It only has a somewhat longer handle, and (since this a cartoon anyway) it is not to scale with the Bolian.

The hypnosis device used by Counselor Troi in TNG: "Lonely Among Us" later appeared as a drug dispenser in the DS9 episode "Honor Among Thieves". 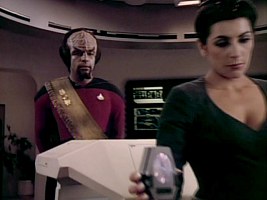 Hypnosis device in TNG: "Lonely Among Us" 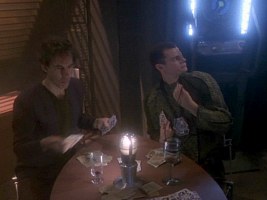 The scanner used in the attempt to save Vedek Bareil's life in DS9: "Life Support" becomes a decoupler in DS9: "Nor the Battle to the Strong".

Decoupler in DS9: "Nor the Battle to the Strong"

In a strange metamorphosis, the blood gas infuser helping to keep Neelix alive in VOY: "The Phage" becomes a multipurpose Voth scanner in VOY: "Distant Origin".

Round cortical stimulator in VOY: "The Fight"

This is another prop with an astonishing but at least partly plausible history. It can be seen for the first time in DS9: "The Magnificent Ferengi" where it is used to "revive" the dead Vorta Keevan by stimulating his nervous system. Since the Ferengi found it in the sickbay of Empok Nor, we can assume that it is a Cardassian device. It is equipped with a red blinking light.

In DS9: "Inter Arma Enim Silent Leges" we can see the prop again. This time it is supposed to be a Romulan mind probe, used to access Dr. Bashir's memory. Actually, we learn about its name as late as in DS9: "Extreme Measures" where Dr. Bashir makes use of exactly such a device to enter Sloan's mind. The naming is anything but consistent here, the three variants are "Romulan memory scanner", "Romulan mind probe" and finally "Romulan mental probe". The only difference between these two episodes is that in "Inter Arma" the light is blue, whereas it is red in "Extreme Measures". Interestingly, the device shows up between these two episodes too when the injured General Martok is treated in DS9: "Tacking into the Wind". We certainly wouldn't expect that brain spying is a standard treatment by Federation physicians. ;-) And just for a change, the LED in the device is yellow here.

Medical monitor in DS9: "Tacking into the Wind"

The felicium injector from TNG: "Symbiosis" was re-used on a different planet albeit for much the same purpose in VOY: "Favorite Son". This could be a valve of a combustion engine in real life.

The device used to measure doses of felicium (or a very similar device) was seen again in "Concerning Flight" where it served as a plasma injector conduit. In real life, this is most likely a pneumatic component, a clutch or a brake. 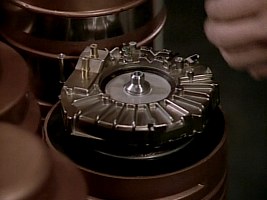 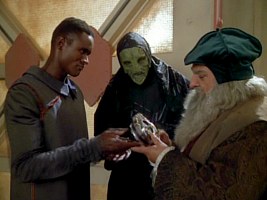 The Romulan medical device, seen on the temples of the Romulan defectors in TNG: "Face of the Enemy", later appears as a translation device used by the so-called Sky Spirits in VOY: "Tattoo". 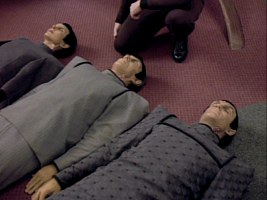 Medical device in TNG: "Face of the Enemy" 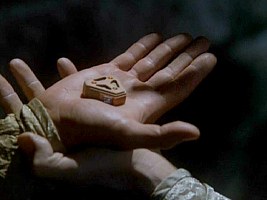 The same scanner shows up in the hand of the Cardassian hologram Crell Moset in VOY: "Nothing Human" and as a Varro device in VOY: "The Disease".

Medical scanner in VOY: "Nothing Human"

Varro scanner in VOY: "The Disease"

A hypospray of Cardassian origin can be seen in DS9: "The Wire", in DS9: "The Darkness and the Light", in DS9: "Sacrifice of Angels" and in VOY: "Repression". The same device also appears in the Delta Quadrant in VOY: "Workforce II" and two centuries earlier as a Ferengi hypospray in ENT: "Acquisition". The prop was modified for each of the two latter appearances though.

Cardassian hypospray in DS9: "The Wire"

Cardassian hypospray in DS9: "The Darkness and the Light"

This device appeared as a dermal regenerator of the Quarra in "Workforce II". In ENT: "Horizon" it was a human 22nd century scanner, in "Bounty" one of the Tellarites.

Tooth sharpeners seem to be important tools in the Ferengi culture, and Worf is visibly fond of them too. But the real usefulness of these little devices becomes obvious considering that they can as well be used for trimming your toe nails.

Pedicure device in DS9: "Tacking into the Wind"

Thanks to Michael Minnick for some valuable hints.