Many props of Star Trek were later modified or even recycled without changes to represent equipment for a different purpose or of another civilization. Here are quite a few examples of devices of which some defy a classification. Please note that every statement made here should be taken with a grain of salt. There is no need to seek for explanations. Certainly we are not supposed to watch closely enough to notice that the same props are used for just every conceivable purpose.

Nomad, the famous deadly robot from TOS: "The Changeling", was later redressed with a new spherical central section to appear as Flint's M-4 in TOS: "Requiem for Methuselah". We can see parts of Nomad also on the Romulan cloaking device in TOS: "The Enterprise Incident".

Nomad in TOS: "The Changeling"

M-4 in TOS: "Requiem for Methuselah"

Dr. Graves has something in his office that looks like a primitive robotic dog (probably rather as a nostalgic decoration than as a display of his present work). The same prop can be seen in Ard'rian's house on Tau Cygna in TNG: "The Ensigns of Command". Here it is obviously meant to be something modern by the standard of the planet's technology, like the other robots that almost make even Data smirk.

Ard'rian's robodog in TNG: "The Ensigns of Command"

The Exocomp from TNG: "The Quality of Life", one of the rather prominent props, reappears as a medical apparatus from the repair station in ENT: "Dead Stop", now painted silver. It has another appearance in ENT: "Future Tense" and as Xindi device in ENT: "Anomaly" (albeit it is just a picture this time).

Exocomp in TNG: "The Quality of Life"

Depiction of a Xindi device in ENT: "Anomaly"

in VOY: "Prototype" B'Elanna assembles the Pralor prototype unit using an arm of Johnny Five from the movie "Short Circuit". The foot looks like it is taken from "Terminator 2".

Device in VOY: "The Voyager Conspiracy"

The same chair can be seen on Tantalus in TOS: "Dagger of the Mind" and on Elba II in TOS: "Whom Gods Destroy".

Chair in TOS: "Dagger of the Mind"

Chair in TOS: "Whom Gods Destroy"

Admiral Jameson's wheelchair in TNG: "Too Short a Season", designed by Andy Probert, later appears in "Conspiracy" as the control chair Dexter Remmick sits on when he is killed by Picard and Riker. 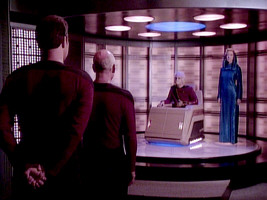 Wheelchair in TNG: "Too Short a Season" 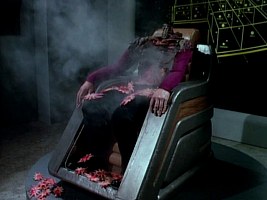 A rack used for the construction of the prototype unit in VOY: "Prototype" later appears as an examination couch on Dr. Gegen's starship in VOY: "Distant Origin". The prop undergoes a few modifications but is still essentially the same when it shows up in the Chaotica holoprogram in VOY: "Shattered" and on the Hirogen holoship in VOY: "Flesh and Blood".

We can see the same table in Dr. Sulan's lab in VOY: "Faces" but also in Voyager's engineering in VOY: "Prototype".

The prop reappears in sickbay in VOY: "Meld". On this occasion it replaces the normal surgical bed. The reason is apparently plot-driven. Tuvok frees himself by ripping off a power cable from the surgical bed to disrupt the forcefield. Since the normal bed didn't have such a cable, it may have been deemed necessary to replace it in just this one episode.

Biotemporal chamber in VOY: "Before and After"

Various types of stasis pods of different civilizations are actually the same prop.

Starfleet stasis chamber in VOY: "One"

Vaadwaur biopod in VOY: "One"

A large glass (or rather transparent plastic) tube was used as a quarantine unit in ENT: "Cold Station 12" and as an agony booth in the Mirror Universe in ENT: "In a Mirror, Darkly" (the latter inspired by the TOS episode "Mirror, Mirror".

Agony booth in ENT: "In a Mirror, Darkly"

This prop appeared as a Vidiian medical device in VOY: "Phage" and as a Quarra brain probe in VOY: "Workforce I". It can be rented from Modern Props.

Hole in a pipe

The damage to the transporter ionizer in TOS: "The Enemy Within" and to the pipe in TOS: "The Devil in the Dark" appears to be identical. The pipe was simply turned upside down for its second apparearance.

Hole in TOS: "The Enemy Within"

Hole in TOS: "The Devil in the Dark"

The transparent dome of Lazarus's shuttle in TOS: "The Alternative Factor" was later re-used to cover the three Provider brains in TOS: "The Gamesters of Triskelion". A console was integrated into the existing hemispherical cut-out in the dome.

Brain dome in TOS: "The Gamesters of Triskelion"

In TOS: "I, Mudd", "The Immunity Syndrome", "Obsession" and (modified) in "Elaan of Troyius" there is a strange strobing device that we call the "CD rack" because it looks like one (yes, we know there weren't CDs in the 1960's). The fourth appearance looks to have been modified with the orb thing from the Romulan cloaking device (later used in conjunction with Nomad to form the robot M-4 in "Requiem for Methuselah").

The pump from TOS: "The Devil in the Dark", a device composed of bars in a cylindrical arrangement, reappears in Norman's lab in "I, Mudd" and in McCoy's lab in "Obsession" (on the two latter occasions together with the "CD rack").

Cylinder in TOS: "The Devil in the Dark"

Three spheres (of which one would later act as the Romulan cloaking device) serve as receptacles for Sargon and his people in TOS: "Return to Tomorrow". The tripod pedestal of Sargon's sphere, now turned upside down, reappears on Mr. Atoz's desk in TOS: "All Our Yesterdays".

Tripod in TOS: "All Our Yesterdays"

The reactor stolen by the Gatherers in TNG: "The Vengeance Factor" seems to be essentially the same design as the reactor of the duck blind in "Who Watches the Watchers", only it is mounted sideways here. The device reappears on Valo II in TNG: "Ensign Ro". 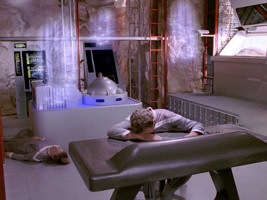 Reactor in TNG: "Who Watches the Watchers" 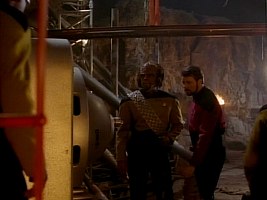 Reactor in TNG: "The Vengeance Factor" 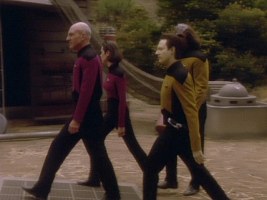 The Rutian space-folding would continue to be re-used in various forms in many later episodes. It can be seen in the warp nacelle in "Eye of the Beholder" and as USS Voyager's main computer processor in "Concerning Flight". It also appears as the Malurian antimatter reactor in ENT: "Civilization". 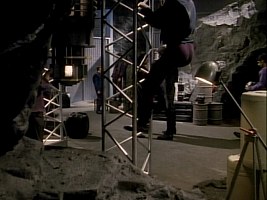 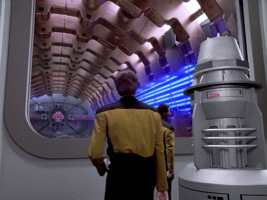 Starfleet device in TNG: "Eye of the Beholder" 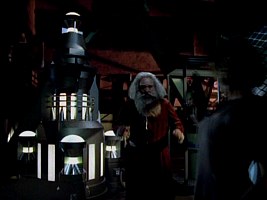 The first appearance of this prop is as the alien field generator that Bashir takes to the Enterprise for closer investigation in TNG: "Birthright, Part I". The prop was simply turned by 90 degrees and slightly modified to look more "Starfleetish" and to serve as Voyager's polaron generator (the one that causes the paradox in the first place) in VOY: "Time and Again".

The curious thing about the above mentioned polaron generator from VOY: "Time and Again" is that the device looked completely different and more modern when the crew assembled it on the ship. It is possible that the prop was damaged (perhaps the glass or plexiglass casing was smashed?) and hence was not available any longer for the rest of the scenes. In any case, this possibly original prop consisted of different parts that had appeared in episodes before (the transparent tube) or would still appear later (the upper and lower parts inside the tube).

Parts of the polaron generator

The Mari resonator coil from VOY: "Random Thoughts" was formerly a part of the polaron generator and became an ion distributor aboard the Ares IV in "One Small Step".

The container devised to destroy the Harvester weapon in DS9: "Armageddon Game" was repainted, and additional antennae were added to serve as the temporal field generator on Golana in DS9: "Time's Orphan". On both devices the central part is extendable, to insert the Harvester cylinders and to activate the time portal, respectively.

The chute cover to the ore processor from DS9: "Civil Defense" also shows up on the wall of Smiley's ship in the Mirror Universe.

Cover in DS9: "Through the Looking Glass"

These blinking tubes are the ultimate re-used prop. There is not a single of its numerous appearances where its purpose would be explained or only hinted at. The first time we see the blinking tubes is in the Regula lab in "Star Trek II". They are also visible in the Enterprise-A's shuttlebay in "Star Trek V".

Tubes on the Enterprise-A in "Star Trek V"

Furthermore the tubes appear in a number of TNG episodes, like in TNG: "Datalore", "Suddenly Human" and "The Quality of Life".

Dr. Farallon's tubes in TNG: "The Quality of Life"

The tubes also show up in VOY: "Retrospect", "Pathfinder" and "Inside Man". Finally the prop can be seen in Soong's hideout (with red tubes) as well as on the research station (with blue tubes, because blue has become a more fashionable color for light effects) in ENT: "Cold Station 12".

Tubes in Pathfinder lab in VOY: "Inside Man"

The components holding the tubes are two ground skimmers (for use in swimming pools). The depiction shows a similar model. Ground skimmers were also used for consoles that can be seen in "Star Trek II", as well as for standalone devices.

Tube holders in TNG: "The Quality of Life"

The blinking tubes were not custom-made in the Star Trek Art Department, but it was available for rent from the now defunct company Modern Props. It was originally built for the original Incredible Hulk TV series, according to Modern Props founder John Zabrucky. The prop is described as "dual generators with rotating neon lights inside an acrylic tube; light-controlled panel with knobs and buttons." The tubes appear in other science fiction series and movies as well, such as "Airplane II" (with William Shatner), "V" (the 1983 miniseries), "The Last Starfighter" (1984) or "Austin Powers: The Spy Who Shagged Me".

Tubes in "The Last Starfighter"

Art coordinator Penny Juday mentioned in an interview that the tubes the Borg install on the Enterprise-E deflector dish in "Star Trek: First Contact" were built from bird feeders. The tubes reappear as Vaadwaur devices in VOY: "Dragon's Teeth" and on Voyager in VOY: "Nightingale".

The Romulan graviton field generator in TNG: "The Next Phase" was modified and reappeared as a Federation cloaking device in "The Pegasus". It was also shown as a forcefield generator in VOY: "Gravity". After that, parts of the prop were seen again as a Kinjal polaron modulator in the Voyager episode "The Void" and, coming full circle, as part of the arming mechanisms of a Romulan mine in "Minefield". 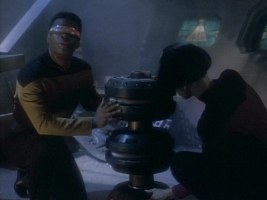 Graviton generator in TNG: "The Next Phase" 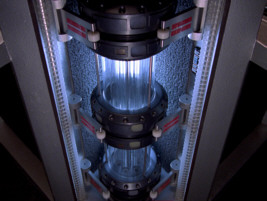 Cloaking device in TNG: "The Pegasus" 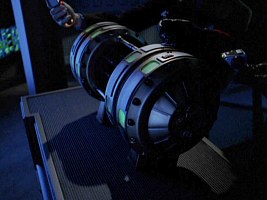 Polaron modulator in VOY: "The Void" 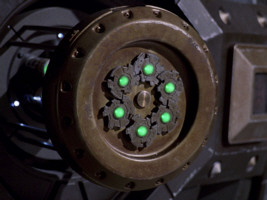 Mine arming mechanism in ENT: "Minefield"

The chronodeflector shown in VOY: "Endgame" later serves as a power generator in ENT: "Precious Cargo".

Round platform with railing

A railing of the platforms in the Tsunkatse training area was repainted and can be seen on the Brunali planet in VOY: "Child's Play".

A very curious prop re-use can be observed in one and the same episode, in ENT: "Acquisition". We can see an Earth tool cart, complete with Starfleet labels. The Ferengi bring their own tool cart, which is the same prop, only painted green. The cart is commercially available as "Bin Utility Cart".