Many props of Star Trek were later modified or even recycled without changes to represent equipment for a different purpose or of another civilization. Here are quite a few examples of containers and bottles of various sizes. Please note that every statement made here should be taken with a grain of salt. There is no need to seek for explanations. Certainly we are not supposed to watch closely enough to notice that the same boxes can be seen just everywhere in the galaxy.

The tanks were originally seen on the Regula I research station in "Star Trek II: The Wrath of Khan". They appeared again in "Star Trek IV: The Voyage Home" on Vulcan, behind La Forge in the underground Farpoint Station tunnels in TNG: "Encounter at Farpoint" and on Mordan IV in TNG: "Too Short a Season".

Cylinders in TNG: "Encounter at Farpoint" 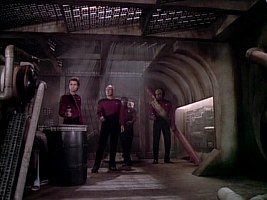 Cylinders in TNG: "Too Short a Season"

These characteristic spherical containers show up in the Cardassian labor camp in DS9: "The Homecoming". The prop reappears aboard USS Voyager in VOY: "Learning Curve". We can also see the prop in VOY: "Resistance" on the Alsaurian planet and in VOY: "Unity" on the planet of the Cooperative. The Vori use this design for containers as well as for a generator of unknown purpose. The same prop is utilized on Hirogen ships as a sort of control console.

Cardassian containers in DS9: "The Homecoming"

Device of the Cooperative in VOY: "Unity"

Later, in Voyager's season 6, the onion-like containers appear on the Brunali planet. The prop can also be seen aboard the ECS Fortunate. The containers were modified to act as parts of the Romulans mine in ENT: "Minefield" and of the deuterium headframes in ENT: "Marauders". Finally, the container appears at the entrance of the mine in ENT: "The Xindi" and in the background, beside the spherical container, in ENT: "Anomaly".

Romulan mine in ENT: "Minefield"

Container in ENT: "The Xindi"

The onion-shaped containers even show up in the new continuity in "Star Trek (2009)". Two of them can be seen on the Narada when Spock and Kirk board the ship towards the end of the movie.

A similarly structured but more angular variant of the container appears on the crashed USS Hiawatha in DIS: "Brother".

Outside the Trek Universe one of these containers shows up in the Firefly episode "War Stories".

The EPS regulators on DS9 can also be seen at the time portal of Golana (DS9: "Time's Orphan"), where they must have been around for many centuries. The prop can be seen in at least eleven more episodes, most often as freight containers. Only in one of its latest known incarnations as flower pots in ENT: "Oasis" the spheres are used in a similar fashion as originally intended. It is a composter named "Bio Orb".

EPS regulator in DS9: "In the Cards"

Containers in DS9: "What You Leave Behind"

Still more containers, and the origin of the prop

The round compost containers appeared not only in Star Trek but also in "Babylon 5", "Crusade" and "Galaxy Quest".

Containers in "Babylon 5" and "Galaxy Quest"

Speaking of composters, the self-replicating mine from DS9: "A Call to Arms" showed up in at least six other episodes, each time as cargo containers. In VOY: "Memorial" and ENT: "Favorite Son" there was even a combination of this type of composters and the one above. Most remarkably the containers formed a part of the hull of the Tellarite freighter in ENT: "Bounty".

Self-replicating mine in DS9: "Call to Arms"

Containers in ENT: "The Xindi"

The former self-replicating mine, just like the other types of containers, also shows up in ENT: "Anomaly" (at the very left edge).

The same containers can be seen in the Genesis cave in "Star Trek II", on Gamma Hromi II in TNG: "The Vengeance Factor", on the Zibalian ship Jovis in TNG: "The Most Toys" and in the illusory future created for Riker in TNG: "Future Imperfect", here allegedly of Romulan origin. This prop was originally a Little Tikes Apollo Space Capsule that was painted to appear less toy-like. 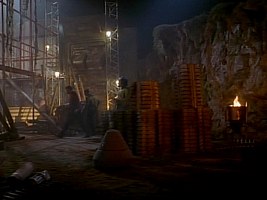 Containers in TNG: "The Vengeance Factor" 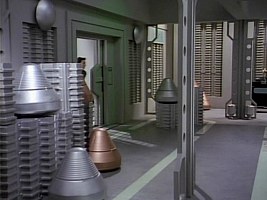 Containers in TNG: "The Most Toys"

The Bolian container from DS9: "Who Mourns for Morn?" was only slightly modified to act as the upper part of a drill on the New Sydney colony in DS9: "Prodigal Daughter".

Bolian container in DS9: "Who Mourns for Morn?"

The same trolley is used in mines of many civilizations.

Other Boxes and Bottles

In TOS: "Dagger of the Mind" (as medical containers), TOS: "The Galileo Seven" (as a transporter test container), TOS: "This Side of Paradise" (as a container on Omicron Ceti III), TOS: "I, Mudd" (on the android planet), TOS: "The Trouble with Tribbles" (on K-7) and TOS: "The Enterprise Incident" (in the Romulan cloaking room) we can see the same type of cylindrical columns with a black top. On the three latter occasions they may be air conditioning systems.

Column in TOS: "This Side of Paradise"

Columns in TOS: "The Trouble with Tribbles"

Column in TOS: "The Enterprise Incident"

The box for the Albeni meditation crystal that Riker gives to Beata in TNG: "Angel One" is the same that O'Brien uses to transport his spider, as seen in "Realm of Fear".

Box in TNG: "Realm of Fear"

The Acamarian delegation travels with the same type of suitcase in TNG: "The Vengeance Factor" as Vash in "Captain's Holiday" and Wesley in "Ménage à Troi". 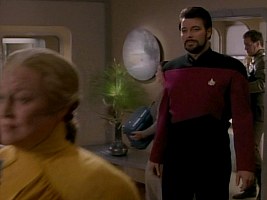 Suitcase in TNG: "The Vengeance Factor" 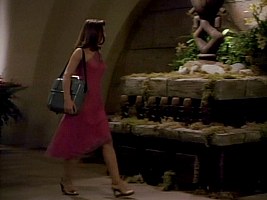 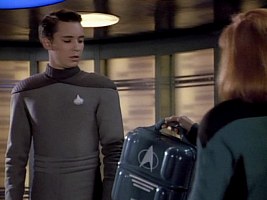 Cylinders with an octagonal cross-section could be seem in many episodes of Star Trek, most notably as Starfleet sample containers and transporter test cylinders. Overall, these devices appeared in at least 40 episodes or movies! The prop was made from containers for sonobuoys of the U.S. Navy. A separate article shows all appearances of these containers: Re-Uses of Sonobuoy Containers.

Cargo cylinders in DS9: "The Maquis I"

A blue bottle acts as a Zalkonian data storage device in TNG: "Transfigurations". The same bottle appears on a market place on the Mari homeworld in VOY: "Random Thoughts".

Since we could previously see it as a plasma bottle in VOY: "Prototype", Janeway's thermos flask in VOY: "Endgame" probably holds the hottest tea ever. The prop looks like it could be a real thermos flask.

The same glass jar can be seen in the Vidiian lab in VOY: "Phage" and in Voyager's sickbay, for instance in VOY: "Parturition".

A set of three conical bottles with the Vidiian antidote in VOY: "Resolutions" can be seen again in "Body and Soul", now in the sickbay of the Lokirrim ship. It appears that the yellow liquid is a permanent filling (or just painted on) because it looks identical in both episodes.

A bottle that was previously used for Klingon bloodwine can be seen as an Eska bottle in ENT: "Rogue Planet".

Klingon bottles in DS9: "The Way of the Warrior"

We can see the same type of a small spherical container in very different times, locations and functions. In real life this device is called a LOX (liquid oxygen) bottle or LOX converter, as it is used especially in older military aircraft.

Container in DS9: "The Quickening"

Cooking sphere in VOY: "The Void"

Container in ENT: "Shockwave I"

Some screen caps from TrekCore. Thanks go to Philip Bober and Lin Jingqiu for sightings of containers, to Greg McAvoy for information and pictures of the LOX bottle and to Shawn Havery and Michael Minnick for finding several more props.