Many props in Star Trek were later modified or even recycled without changes to represent equipment for a different purpose or of another civilization. Here are quite a few examples of desktop and handheld computing devices. Please note that every statement made here should be taken with a grain of salt. There is no need to seek for explanations. Certainly we are not supposed to watch closely enough to notice that computers look all the same everywhere in the galaxy.

Kor is using a Starfleet computer in TOS: "Errand of Mercy". Another computer of the same type can be seen on Eminiar VII in "A Taste of Armageddon".

Computer in TOS: "The Conscience of the King"

Computer in TOS: "Errand of Mercy"

Computer in TOS: "A Taste of Armageddon"

The Cardassian computer that Gul Madred uses in TNG: "Chain of Command" is a modification of the standard TNG Starfleet monitor. It later appears on Baran's ship in TNG: "Gambit". The prop was repainted for its second appearance (curiously, in the new brown color it looks even more Cardassian). Considering that Baran is a pirate, it would be easy to explain how he got his hands on a Cardassian computer. However, Baran is only the first of many new users to come.

Romulan monitor in DS9: "Improbable Cause"

In DS9: "Rejoined" Trill scientists take one of their monitors (among other equipment) aboard the Defiant for their wormhole experiment. The same monitor can be seen in "Sloan's mind" in DS9: "Extreme Measures". The other monitor in the latter scene is a variant of the TNG monitor.

The prop was repainted several more times and appears in many more episodes of DS9 and Voyager.

A typical Starfleet desktop console, as seen in DS9: "Whispers", was slightly redressed to stand in as a Dinaali device in VOY: "Critical Care".

A Starfleet console that can be seen in VOY: "In the Flesh" and "Life Line" (albeit in a Species 8472 simulation in the first case) also appears as a Kraylor computer in "Nightingale".

Starfleet console in VOY: "In the Flesh"

The identity scanner used by Data in "The Measure of a Man" can be seen again in TNG: "Unification I", where a Romulan is holding the prop. 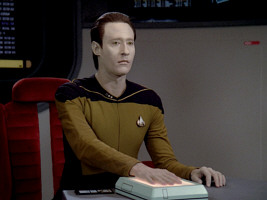 Scanner in TNG: "The Measure of a Man" 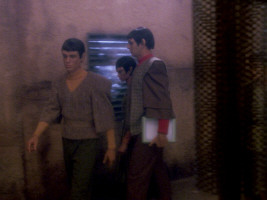 White box in TNG: "Unification I"

This octagonal box was originally built for TNG: "Booby Trap", where it served as a data storage device. It then appeared as the communication scrambler used by Jonas in VOY: "Threshold". Finally, we could see the box as a communication device of the Borg Cooperative in VOY: "Unity". The device was repainted and slightly modified each time.

This desktop box with a holographic data storage slot can be seen as a holographic enhancement module in TNG: "Ship in a Bottle" and, in a similar function, as an optronic data core in VOY: "The Killing Game II". However, it also appears 200 years earlier in ENT: "Stigma", here as a Vulcan data clip reader. 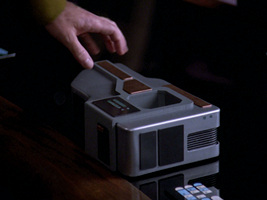 Holographic enhancement module in TNG: "Ship in a Bottle"

The first time that this type of Klingon desktop monitor appears on TNG is in "Redemption II". It is seen again, as a Klingon monitor, in "Unification II" and after that appears as a Starfleet monitor in "Descent I" and "Sub Rosa". In the VOY episodes "Time and Again" and "Ex Post Facto" it appears on the polaric energy planet and on Banea respectively. 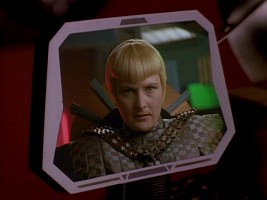 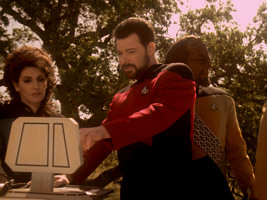 Starfleet monitor in TNG: "Descent I" 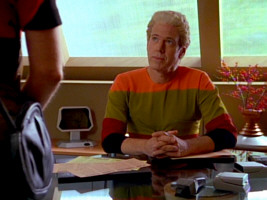 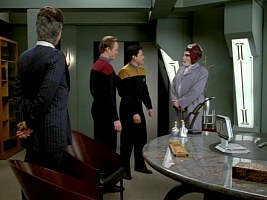 The 21st century PADD seen in "Encounter at Farpoint" reappears on Romulus in TNG: "Unification I". 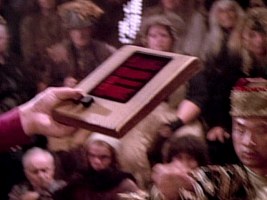 PADD in TNG: "Encounter at Farpoint" PADD in TNG: "Unification I"

In TNG: "Code of Honor", Tasha Yar uses a PADD to start a holodeck program instead of a voice command. In "11001001" two of these PADDs can be seen to the left and right of the holodeck control LCARS display. One is later seen up close as a medical PADD in "Well Always Have Paris". Slightly modified, they also appear as Orion PADDs in the Enterprise episode "Borderland" more than 15 years later. 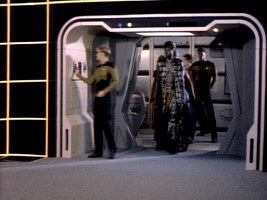 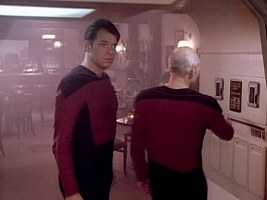 In DS9: "The Circle" the Kressari captain demands a thumb print from his Cardassian trade partner. His PADD can be seen along with Kressari lettering. The same equipment without any visible changes is used in DS9: "The Die is Cast". Here the Romulan Lovok, actually a Changeling in disguise, hands out a PADD to Garak and Odo that obviously carries the access code to the shuttlebay.

Romulan door opener in DS9: "The Die is Cast"

Also, the prop shows up in VOY: "Critical Care", here as a PADD again.

The Romulan PADD from Neral's office in both parts of TNG: "Unification" can be seen on the Mari homeworld in VOY: "Random Thoughts" as well. The display was most likely modified for its new role though.

Romulan PADD in TNG: "Unification I"

The Tyran PADD from TNG: "The Quality of Life" later appears in the Voyager episode "Ex Post Facto", where it is used by the Numiri. Tyran PADD in TNG: "The Quality of Life" We can see the same prop as a Trill PADD in DS9: "Equilibrium" and, now painted differently, as a Dinaali device in VOY: "Critical Care". It looks like a Children's game console to us.

After this strangely shaped prop had appeared as a Qomar device in VOY: "Virtuoso", we could see it again as a Hierarchy PADD in "Renaissance Man".

The Quarren PADD from VOY: "Workforce" later becomes a Denobulan PADD and appears in two episodes, ENT: "Stigma" and "The Breach".

Jonathan Archer always complains that the Vulcans wouldn't share their technology. But in ENT: "First Flight" his colleague Robinson uses a PADD that the Vulcans still consider state-of-the-art a couple of years later, as seen in "Stigma".

Daniels uses this rounded device in ENT: "Cold Front" to control his temporal observatory. We can see a display that looks much like those on the Relativity in the Voyager episode of the same name. In ENT: "Regeneration", however, the same device is a scanner.

We can see this characteristic prop consistently as a Ferengi PADD. But we need to wonder whether it would really remain unchanged for more than 200 years.

A PADD that consistently appeared as a Cardassian device during DS9 gets a new life with different civilizations on Star Trek Enterprise.

Cardassian PADD in DS9: "Ties of Blood and Water"

The Bajoran PADD from DS9 becomes a Vulcan device in ENT: "Stigma".

The Bajoran tricorder, as seen in DS9: "Indiscretion" and "Return to Grace", becomes an Enolian device to unfasten handcuffs in ENT: "Canamar".

A number of characteristic hexagonal communicators was built for the Aldeans in TNG: "When the Bough Breaks". The devices were used to communicate and to signal when they wished to be beamed back. The button to send the signal was located in one of the corners. Many years later we could see a modification of this prop on Star Trek Voyager, used by the authorities of an alien planet to measure the polaric radiation in VOY: "Time and Again". The color and the central area of the device had been modified, but the button was still there.

Aldean communicator in TNG: "When the Bough Breaks"

The prop reappeared in VOY: "Prototype". Here the Automated Unit disables B'Elanna with an energy blast from the device, and then signals the Pralor vessel to beam them over. The color was modified again (it is now glowing red from the inside), and the button was removed. The hole where the button was mounted is still visible if we look closely. We could also see the device as an Ubean scanner in VOY: "Fair Trade".

Another interesting prop can be seen for the first time in TNG: "The Most Toys". In this episode it serves as a fingerprint scanner. When Data is confirming the deal with Fajo with his fingerprint, he is disabled by an energy surge from the device. A further appearance is in TNG: "The Masterpiece Society" where it becomes a scanner. The denizens of the Moab colony use it to scan for fractures in the shell of their artificially built environment. For this purpose an illuminated window was added in the place of the former fingerprint sensor.

Fingerprint scanner in TNG: "The Most Toys"

Scanner in TNG: "The Masterpiece Society"

In two later episodes the unmodified prop serves as a display device, namely in TNG: "Frame of Mind" as a Tilonian PADD and in TNG: "Gambit" as Galen/Picard's PADD. Finally, the prop can be seen as an Enaran PADD in VOY: "Remember".

The scanner used by the Devore to examine Voyager in VOY: "Counterpoint" later appears as a "sacred" instrument in the hand of the impostor Mobar in VOY: "Live Fast and Prosper".

Penk's scanner in VOY: "Tsunkatse" is the same as the Lokirrim device that Seven is holding in VOY: "Body and Soul".

The TOS computer re-uses were found by Michael Minnick and Felix Ernie. Alex Müller spotted the Dinaali console. Thanks to Will for some of the TOS screen caps.