Many props and pieces of decoration in Star Trek were later modified or even recycled without changes to represent equipment for a different purpose or of another civilization. Here are quite a few examples of stationary computers, control consoles and displays. Please note that every statement made here should be taken with a grain of salt. There is no need to seek for explanations. Certainly we are not supposed to watch closely enough to notice that the equipment looks all the same everywhere in the galaxy. 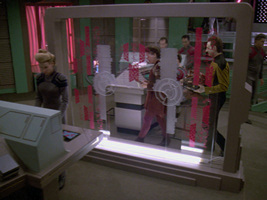 Display on the particle fountain in TNG: "The Quality of Life"

Display on the bridge in TNG: "Parallels"

Stargazer viewscreen in TNG: "The Battle"

Battle bridge screen in TNG: "The Arsenal of Freedom"

Courtroom screen in TNG: "The Measure of a Man"

Battle bridge screen in TNG: "The Best of Both Worlds II"

After some more extensive modifications, the viewscreen could be seen on Kazon ships in VOY: "Initiations" and in "Maneuvers". It was then returned to a Federation look and finally appeared on the Raven both in VOY: "The Raven" and "Dark Frontier".

Raven viewscreen in VOY: "The Raven"

The computer screen seen on Risa in TNG: "Captain's Holiday" later appears on the Zalkonian ship in TNG: "Transfigurations", albeit in a little prominent place somewhere in the background.

The command chair as well as the main screen of the Ktarian ship from TNG: "The Game" show up on the Romulan Warbird in TNG: "Face of the Enemy". What does it tell us about the state of the empire that the Romulans need to steal their furniture from minor races? ;-)

Ktarian screen in TNG: "The Game"

The viewscreen, like so many other familiar items, also shows up on the Mari homeworld in VOY: "Random Thoughts", here as a wall niche.

An octagonal viewscreen that we normally associate with the Klingons also appears on the Lokirrim vessel in VOY: "Body and Soul".

Klingon viewscreen in DS9: "Soldiers of the Empire"

Essentially the same console appears in TOS: "Return of the Archons" (as "absorption" control console), "I, Mudd" (as Norman's console), "The Enterprise Incident" (on the Romulan ship, holding the cloaking device), "Whom Gods Destroy" (in the mental institution on Elba II) and "The Lights of Zetar" (at Memory Alpha).

Console in TOS: "Return of the Archons"

Console in TOS: "Whom Gods Destroy"

Console in TOS: "The Lights of Zetar"

The famous "pool table" in the Enterprise-D engineering with its distinct bone-shaped table top previously appeared at Starfleet Command in "Star Trek: The Voyage Home".

This type of computer consoles appeared on Aldea in TNG: "When the Bough Breaks", but also as Starfleet equipment in the 23rd century ("Star Trek V") and in the 24th century (TNG: "Coming of Age", "The Emissary" and several more TNG episodes).

Aldean console in TNG: "When the Bough Breaks"

Starfleet console in TNG: "The Emissary"

The Custodian console on Aldea from TNG: "When the Bough Breaks" reappears in "Star Trek V: The Final Frontier" as a Klingon communications console on Nimbus III. It is also visible on the Romulan Warbird in TNG: "Contagion" and on the Pakled ship Mondor in TNG: "Samaritan Snare". 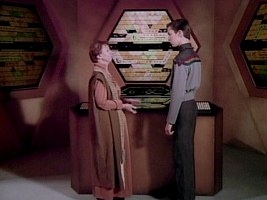 Aldean console in TNG: "When the Bough Breaks" 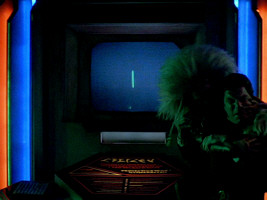 The characteristic big console seen to the right of Ba'el in TNG: "Birthright II" has appeared once before, aboard the Ferengi Marauder in "Ménage à Troi". The integrated tubular "laundry hamper" looks different now, and the larger boxy part is probably integrated to the wall in a way that only one of the small hemispheres on top is visible. 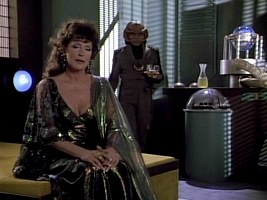 The console from the Stellar Cartography department of the Enterprise-D in TNG: "Lessons" was later redressed to appear as a Nezu console in VOY: "Rise".

This console originally appeared in the Enterprise-D cybernetics lab in "The Offspring", "The Best of Both Worlds II" and "Interface". The distinctive pyramid was added for the Cardassian generator in TNG: "Chain of Command, Part I", as well as for Lore's console in "Descent, Part II".

Enterprise-D console in TNG: "The Offspring"

The Romulan engineering console from TNG: "Timescape" reappears as the control console in the auxiliary control room of the USS Raman in TNG: "Interface" and then (with heavy modifications) as an engineering console on the USS Pegasus in TNG: "The Pegasus". The octagonal basic shape with the angular control panels is clearly identifiable in all three versions.

The same basic console design can be seen on a Ferengi shuttle, as a Romulan console and on a Tamarian warship. The paint and the controls are different each time though.

Ferengi console in TNG: "The Price"

Romulan console in TNG: "The Defector" 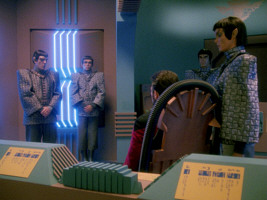 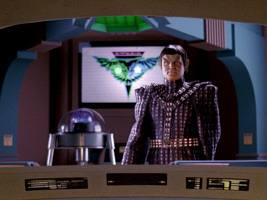 A characteristic large horseshoe-shaped control console can be seen on the bridge of the USS Pasteur in TNG: "All Good Things". It reappears on the Raven both in VOY: "The Raven" and "Dark Frontier" but also in the Quarren power plant in the two parts of VOY: "Workforce".

Raven console in VOY: "The Raven"

A typical Starfleet console appears both on the Defiant bridge and in the ship's transporter room. In Star Trek: Voyager, we can see the same console (or another copy with slight modifications) in various different places and functions: in the Nakan camp in VOY: "Memorial", on the Borg ship in "Collective", in Dr. Zimmerman's lab in "Life Line" and on the Hirogen holostation in "Flesh and Blood".

This one is hard to see, but the small free-standing consoles on the bridge of the Romulan Warbird in DS9: "The Die is Cast" were later reused in the Defiant's engine room at each side of the warp core in DS9: "The Adversary" and other episodes.

Romulan bridge console in DS9: "The Die is Cast"

This large console could be seen in VOY: "Hope and Fear", "Bride of Chaotica!" and possibly some more episodes.

A console that consists of a central column and two lateral transparent screens appears as the blood gas infuser console in VOY: "Phage", which is used to keep Neelix alive before the Doctor creates holographic lungs. But it can also be seen as something like an information display in front of a flower shop in the alternate reality of VOY: "Non Sequitur".

The Kazon computer console from VOY: "Investigations" can be seen again on the Mari homeworld, on the Hirogen holoship and in Chaotica's hideout. 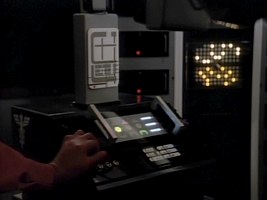 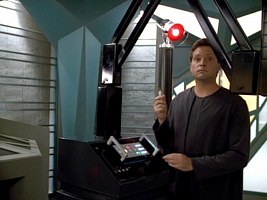 A console with something looking like a 20th century radar screen can be seen on the terraforming station in TNG: "Home Soil", on Ventax II in TNG: "Devil's Due" but also on the Uxali homeworld in the Delta Quadrant in VOY: "Friendship One". The prop could be rented from Modern Props (#195-820-1). Console on Ventax II in TNG: "Devil's Due"

Uxali Console in VOY: "Friendship One"

A console of unknown purpose with a round superstructure and large blinking lights can be seen in the Captain Proton simulation in VOY: "Night", as well as on the Son'a command ship in "Insurrection", on the Talaxian asteroid in VOY: "Homestead" and on the Orpheus station in ENT: "Demons". It could be rented from Modern Props (#195-2497-1 or #195-2495-1).

This console appears in many Voyager episodes. It could be rented from Modern Props (#195-2286-0).

Starfleet console in VOY: "Inside Man"

Chakotay and Tuvok have the same type of desk with a built-in console in their offices, as has Dr. Zimmerman in his lab. However, we can see the very same desk also more than 200 years earlier on the ECS Fortunate, on Menos's ship and in Shran's ready room aboard the Kumari (the latter along with the Ergoform Workseat).

The same prop can be seen as the lateral control console of "Alice" and as a free-standing console for the captain's chair on the ECS Fortunate.

A console with untypical (for Star Trek) mechanical levers can be seen on a the Ferengi ship in ENT: "Acquisition", but also on a Suliban ship in ENT: "Shockwave" and on a Xindi-Insectoid vessel in ENT: "Azati Prime".

This is an obvious one: Gary Seven's computer in TOS: "Assignment Earth" and the Atavachron terminal operated by Mr. Atoz in TOS: "All Our Yesterdays" are identical.

Atavachron terminal in TOS: "All Our Yesterdays"

A display panel with a "printed circuit board" look in the Enterprise engineering is also visible behind Balok's puppet on the Fesarius in TOS: "The Corbomite Maneuver".

On the Romulan ship in TOS: "The Enterprise Incident" we can see elongated hexagonal wall panels beside the doors with something like a button, a light, and/or a sensor in the center (part of a Romulan style that comprises several more hexagonal shapes, such as notably the Romulan emblem). They reappear on the Eymorg homeworld in TOS: "Spock's Brain".

This versatile set decoration, consisting of a box with beveled edges in a frame, started off as a light fixture on the Enterprise-A. One of them can be seen dangling from the ceiling on the damaged bridge in "Star Trek: The Undiscovered Country". The boxes apparently serve the same purpose on USS Voyager where they can be identified above the side doors of the bridge.

In the course of the series, we can see the box as a part of various alien consoles, such as in the Vidiian lab in VOY: "Faces", on Jetrel's Haakonian ship in VOY: "Jetrel" and on the Hierarchy ship in "Renaissance Man". 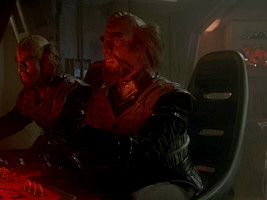 Console in "Star Trek I" 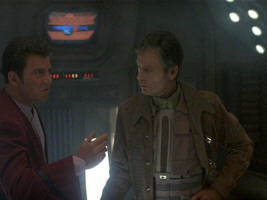 The consoles also appear in several TNG episodes, such as in TNG: "Coming of Age" in Wesley's "psycho test" but also on the Ferengi bridge in TNG: Peak Performance". The central console in the sensor control room that Worf and Geordi are working on in TNG: "Lonely Among Us" appeared several more times on TNG. One early re-use is in "The Outrageous Okona" on the bridge of the Straleb vessel. Console in TNG: "Lonely Among Us" Console in TNG: "The Outrageous Okona"

The copper-colored columns (partially illuminated) in DS9: "Let He Who Is Without Sin" originate in the engine room of the Enterprise-E in "First Contact". These pillars would later appear in Star Trek: Voyager, on the Borgified USS Voyager and on Borg ships.

Risian column in DS9: "Let He Who Is Without Sin"

Risian column in DS9: "Let He Who Is Without Sin"

In another universe, the light columns also appeared in the TV movie "The Osiris Chronicles" aka "Warlord: Battle for the Galaxy", produced for the UPN network in 1998. Its production design is very reminiscent of that of Star Trek anyway.

Columns in "Warlord: Battle for the Galaxy"

Columns in "Warlord: Battle for the Galaxy"

The console on the Kazon raider from VOY: "Maneuvers" was modified and later appeared in Marayna's control room in VOY: "Alter Ego" and on two Caatati ships in VOY: "Day of Honor".

A control panel first appeared on the thermal array in Neelix's kitchen and later on a Serosian ship.

Some screen caps from TrekCore. The re-used Enterprise-D engineering display was found by Nathan Koga and Tadeo D'Oria, the "pool table" and more TOS consoles by Michael Minnick. Simon Allen and unitron6991 spotted the lever consoles, Ron Ferrara the pyramid console and Christopher Havel the "Alice" console. Special thanks to Tadeo D'Oria and Brian Bennett for various additions!