Size of the Akira Class

The true length of the Akira class is not fully evident because of the following conflicting size figures (explained in the ship size table):

The Akira class appears in "Star Trek: First Contact", in various DS9 Dominion War episodes and in VOY: "Message in a Bottle" and "Endgame".

Although the shots in "First Contact" are the clearest of all, we can't perform a solid comparison because the Akira-class USS Thunderchild is never in the same plane or at the same distance to the camera as other ships. 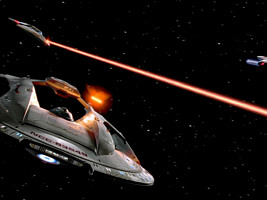 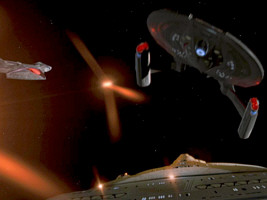 Overall, several scenes that show the Akira near ships of known sizes point to a length of the vessel between 300m and 400m. It seems that this size has been consistently used at latest since DS9. A possible reason is that, for the sake of simplicity, identical VFX sizes were nailed down for the three larger ships from "Star Trek: First Contact", although we can easily imagine that the Akira as the most detailed CGI and the overall most "important" ship class of the three should have been larger than the Norway (which never appeared on DS9, though) and the Steamrunner.

This could be the reason why the Steamrunner and the Akira in the screen capture from DS9: "Favor the Bold" are both noticeably smaller than the Excelsior. Yet, while the three ships seem to be in the same plane, their actual distances from the camera position may be quite different. Actually, most VFX scenes don't exclude the possibility that the Akira is longer than 400m. VOY: "Message in a Bottle" shows the Akira next to the Defiant, whose size is in dispute as well and in which case the evidence is even much more contradictory. Under the assumption that the Defiant is 170m, as officially postulated, the Akira would be longer than 400m. If the Defiant is 120m, the Akira could be, but does not have to be smaller than that.

Akira/Defiant comparison in VOY: "Message in a Bottle"

On another screen capture from DS9: "Favor the Bold", an Akira and an Excelsior can be seen in what appears to be almost the same plane close to one another, with the Akira being a bit shorter than the Excelsior. The same relative scale may have been used in DS9: "Sacrifice of Angels". In the accumulation of ships, one Akira class is apparently a bit closer to the camera than a nearby Excelsior class. With the Excelsior being 467m long, the Akira couldn't be much longer than at most 400m.

The Akira class has numerous windows - probably too many for an alleged warship - that allow an easy distinction of decks. There are 19 decks in total, without the weapons pod. This gives us an absolute minimum length of 330m, if the decks are only 2.5m tall, and a maximum of 522m for an average deck height of 4m as on the Intrepid class. Assuming a standard deck height of 3.4m as on most other Federation starships seen so far the Akira would be 440m, and further evidence points to about this length. There is no reason to assume that the Akira is an exception with regard to deck heights, even if we speculate that a warship might have decks of only 3m or less. The Defiant, as the only warship so far, is the best counter-evidence. At a generous length of 120m, its decks (4-deck version, unless we ignore the MSD) would be 3.9m tall, not to mention the odd "official" ship as in the DS9TM with still 4 decks but at 170m!

When we compare the top views of the Akira and the Sovereign classes, both from the Star Trek Encyclopedia II, it is obvious that the graphic artist took the same bridge modules as well as the same lifeboats for both drawings. In the lower left corner of the above image the Akira top view from this book is scaled to the Sovereign so that the two bridge modules are matched. The result is surprising, since the Akira would be only 272m long, much less than the minimum deck height allows, but about the same size that is allegedly used for VFX, according to David Stipes. However, the schematic in the Encyclopedia II definitely depicts a wrong bridge module, along with other minor flaws, such as a wrong color of the plasma (red instead of blue) in the nacelle window just behind the Bussard collector. It can be assumed that the images shown in Star Trek: The Magazine are much more precise, since they are directly derived from the CGI, and they prove that in reality the Akira has a different bridge module. The lower right corner shows a comparison with matched escape pods, and the Akira turns out to be 440m as in the deck extraction. Therefore 440m±20m is the most likely design size.

Additional note Alex Jaeger, the designer of the Akira, has been quoted that the saucer of the Akira is supposed to be (about) the same width as the Sovereign saucer, but this statement is not certain. If this is true, the length would be roughly 410m and therefore still in the above reasonable range.

David Stipes provides a length of only 262m in his newsgroup post. This is much too small for a ship with 19 decks. Actually, in this case the decks would be only 2m tall! The idea of a ship for dwarfs does not deserve further consideration, even if some of the VFX scenes would allow such an interpretation.

The first printed size comparison for the Akira is contained in the Federation Starships chart in the Star Trek Encyclopedia II. Unfortunately, the ships are only roughly but not exactly shown to scale in this chart. Further clarification can be found in the ship size table page. Concerning the Akira, any length between 400m relative to the Intrepid (344m) or 460m relative to the Galaxy (641m) could be true. The faulty size charts remain unchanged in the extended Encyclopedia III.

The Deep Space Nine Technical Manual lists size figures for the ships featured in the series, including the Akira class. It can be noticed that several Starfleet as well as alien ships with definitely known design sizes are rendered too long in the DS9TM. The reason is that the size figures for the DS9TM were deduced directly from the ship charts in the Encyclopedia II, by simply measuring the depictions and calculating the "real" lengths based on a 642.51m Galaxy or a 481m Vor'cha. Therefore the Akira size figure in the DS9TM is not new, but a consequence of the incorrect (or at least quite inaccurate) Encyclopedia II chart. Hence, the intended size for the ship is somewhere between 400m and 460m.

The size chart by Alex Jaeger of ILM used for the movie was published as late as 2009 by John Eaves. On this chart the 685m long USS Enterprise (still falsely labeled as "Galaxy Class") serves as the size reference for the other vessels. The Akira would be 499m long based on this evidence, which is still within a reasonable range but exceeds everything assumed so far. The chart is apparently just a draft that was produced before the actual CGI models were built. So if these models include more definite evidence such as window rows or lifeboats, this should overrule the chart.

Although the chart is probably just a guideline for the scaling of the CGI models to be built, it may be useful to derive the sizes of the other three "First Contact" Starfleet vessels, namely the Saber class, Steamrunner class and the Norway class.

If we scale the Starfleet ships relative to the Sovereign exactly as on the chart, not only the Akira but just as well the other three vessels would be considerably larger than previously assumed. Especially in the case of the Steamrunner this turns out a bit problematic. The Steamrunner, just as the Akira, apparently uses the same type of lifeboats as the Sovereign, and these would be somewhat too large at a length of this ship of some 400m.

Interestingly, if we scale down the chart lengths of the Akira and the Steamrunner by a factor of 0.88, the lifeboats match, and we arrive at my previously assumed lengths again. It seems that while these two ships later turned out to be smaller than depicted on the chart, they kept their relative sizes. Shrinking the Norway and the Saber likewise, these two remaining ships will still be somewhat bigger than I supposed but overall reasonable in their sizes.

For the most part the VFX shots insinuate an Akira class of somewhat less than 400m length. The ship, however, may be larger if we take into account that the Akira could be farther away from the camera than it seems or that it appears next to ships that don't really allow a size comparison (Steamrunner, Defiant). There is no scene that would inevitably call for an Akira of much less than 400m.

Two independent structural analyses of the Akira point consistently to a size of 440m±20m. This is most probably the design size intended by Alex Jaeger. His scaling chart should be regarded as preliminary. The Akira dimensions given in the official literature are in the according range too, but overall not reliable because of careless scaling of the ship depictions. Unless there is a scene I missed, in which the ship is shown at a really small size next to a ship whose size is definitely known, I will stick to the 440m Akira.

Thanks to Frank Gerratana for his analysis of VFX scenes involving the Akira class (his Trek site is gone for good), to Jörg for the improved screen captures, to Boris for some notes and to John Eaves for posting the size chart.