This article, consisting of a table with "official" ship sizes and a commentary, is meant as a supplement for the general considerations on ship sizes and the ship comparison charts as well as for size analyses of single ships.

The following table summarizes and evaluates the starship length figures given by several official references, namely the Star Trek Encyclopedia II (also in the unrevised edition III), Deep Space Nine Technical Manual, Star Trek Fact Files and a newsgroup posting by David Stipes, VFX supervisor of DS9, in alt.tv.star-trek.ds9 from January 20, 1998. Simply huge (Romulan Warbird, Kazon mothership) and too small (shuttle-sized) vessels are not included, for the error range would become too wide.

The ships in the two charts in the Encyclopedia II are merely ordered by size, while the scale varies, so no clear-cut lengths can be derived from them. Most noticeably the Galaxy and the Vor'cha are too small in relation to the other ships, but the relative sizes of the remaining vessels are not consistent either. Depending on the chosen reference, there are overall errors of up to 15% even for the ships whose sizes are well-known. Taking this into account, the Encyclopedia is no reliable reference for the lengths of the less prominent ships in the chart, like the Akira. A few ships, namely the Constellation, Olympic and Galor, seem to be subject to additional errors so that they don't fit in the order of size. The explanation for the Constellation is simple because the nacelles of the depicted side view are too small, resulting in a size of at most 260m instead of the correct length of approximately 310m. The Olympic should be about the same size, as can be deduced from its deck structure. The Galor is probably designed for a size of 481m, and this is mainly consistent with the VFX. The less than 370m from the Encyclopedia II could be an error which was later reproduced in the DS9TM, although Stipes confirms the small size.

The Deep Space Nine Technical Manual gives size figures for the ships featured in the series. It can be noticed that several Starfleet as well as alien ships with definitely known design sizes are rendered too long in the DS9TM. Actually, while the "major ship" Defiant is scaled independently anyway, only the length figures of the Galaxy and the Vor'cha seem to be correct. The reason is that the size figures for the DS9TM were derived directly from the ship charts in the Encyclopedia II, by simply measuring the depictions and calculating the "real" lengths based on a 642.51m Galaxy or a 481m Vor'cha. Both reference ships give us about the same results, as can be seen in the above table. Thus, the DS9TM is neither a reliable nor an independent source.

The Star Trek Fact Files have few size figures for ships. Apart from the well-known Enterprises there is the ridiculous length of 68m for the Defiant and three entirely different figures for the D'Kora Marauder: 329m from the text in file 37/1, 390m from the specs in file 37/1A and finally 511m from the comparison with the Galaxy (file 37/1 again). This indicates that not much care was taken of the figures. On the other hand, the Fact Files numbers for the Vor'cha, D7, K't'inga, Galor and the prominent Starfleet ships comply with previously published or most likely sizes, quite unlike the Encyclopedia II. Nevertheless, the Fact Files can't be regarded as an independent source.

David Stipes has provided some ship lengths with the explicit hint that these are the sizes used for VFX. Nevertheless, some of the size figures are doubtful. The Intrepid is the best-documented ship ever (which Rick Sternbach is really proud of), and it is and was always 344m, so why make it bigger in the VFX? The Miranda is much too small, even if this is the actual VFX size, the structure of this well-known and well-detailed ship gives us a length of about 243m. By any means, 262m is much too short for the 19-deck Akira. Still, his Defiant size of 170m is correct (at least if we pay attention to the VFX only, Frank ;-)), and the size of the small BoP is reasonable too. Still, it is remarkable that Martok's BoP, namely the Rotarran, is intended to be bigger according to Stipes. While this does anything but facilitate the BoP size problem, the size of 137m corresponds to both the Encyclopedia II and DS9TM lengths, if one takes into account that this and other smaller ships have been scaled up.

Several of the size figures in publications originate in size charts as they were created especially for the movies, to give the people in charge of the visual effects a sense of scales. Here is a selection of notable starship size charts. 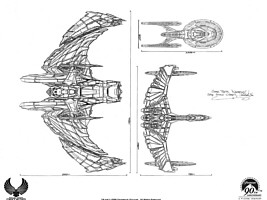 Defiant Problems - Just how little is the tough little ship?

Size of the Dominion Battleship - Does the 5km version really exist?