Re-Uses of the Flaxian Ship

There is only one obvious re-use of the Flaxian ship from the DS9 episode "Improbable Cause", as the Entharan ship owned by Kovin seen in the season 4 Voyager episode "Retrospect". Careful analysis of the scenes in which the ship appears points towards another re-use as the Tak Tak vessel in VOY: "Macrocosm", however. This gives us the following three appearances:

We will analyze in detail each scene in which the model appears.

As far as we can tell, there is only one photo of the actual model around, which was taken for the Christie's auction in 2006. The ship was also depicted in the Star Trek Fact Files (a top view and a side view), which faithfully represents the model. 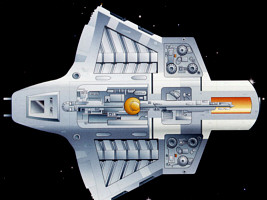 The Flaxian ship is only seen in one scene in "Improbable Cause", which ends with its destruction. The ship flies from left to right. Apart from the orange engine light (similar to the Fact Files depiction and the model sold by Christie's), the model features four position lights. There's a flashing blue position light on the ventral side, relatively close to the front and an orange flashing position light on the dorsal side, roughly at the center of the ship.

On the sides of the ship are port and starboard navigation lights, which are constantly turned on. The port light seems to be blue while the starboard lights looks to be pale pink or purple. This is different from the red and green navigation lights associated with Starfleet ships, for example. Directly before the ship explodes, it can be seen that its aft end is also characterized by orange engine lights.

We'll leave out the Tak Tak ship in "Macrocosm" for the moment, as we get a few better views of the model later in "Retrospect" that should help us identify the Tak Tak ship.

Kovin's Entharan ship is seen in six different shots in "Retrospect". Apart from a side view, we also get a better idea of what the ship looks like from the front and aft and we get a nice close-up, shortly before it explodes.

The engine lights of the Entharan ship are blue instead of orange. This can clearly be seen in the first shot in which the ship appears on the main viewscreen. There's a flashing position light towards the front top end now, much further forward than the central position light in "Improbable Cause".

In the second shot, the ship is seen from the front, quickly running from Voyager. No position or navigation lights are visible. The characteristic shape of the wings can be seen very well here, as also recognizable on the model photo. The upper side of the wings is wider than the lower side, leading to a slightly trapezoid front profile.

The following shot shows an aft view of the ship as seen on Voyager's main viewscreen. The underside of the model can also be seen a little here. There is a dorsal flashing position light; it seems to be located in the same place as on the Flaxian ship.

The fourth shot shows the ship approaching Voyager from the right, firing at the ship. This is not a flipped version of the Flaxian ship footage from the DS9 episode, as the movement and the lighting are different. The blue engine light can clearly be seen. It is also evident, however, that this light was added in post-production to hide the yellow engine of the original Flaxian ship.

Only the top flashing position light is seen, not far behind the cockpit window. Again, there are no navigation lights on the wings, which were still "turned on" when the model was used as the Flaxian ship.

The ship slowly is burning up and explodes in the next shot. It gives us the best idea of the model. Again, no navigation lights on the wings are seen but the location of the yellow flashing dorsal position light can clearly be made out. When comparing a brightened screenshot from this episode with a flipped image of the model at the auction, one can see that all the details match. There's a white line on the front of the wings that is interrupted by a narrow vertical stripe close to the wing tips and a dark square closer to the cockpit. This pattern was also clearly evident in the front views of the ship.

The final shot featuring shows the explosion of Kovin's vessel on the main viewscreen. It cannot really be made out if actual footage of the model is still seen here or if it is just generic "exploding debris" footage.

The Tak Tak ship is only seen ever so briefly on a small science lab viewscreen in VOY: "Macrocosm", flying towards Voyager and firing at the ship. The episode was filmed between "Improbable Cause" and "Retrospect" in Voyager's third season. Just based on the footage from the DS9 episode, it would have been impossible to make a connection between the two ships.

If one looks at the front view of the Tak Tak ship and compares it to the front view of the Entharan ship turned 180°, one can see the similarities. The characteristic shape of the wings, the thin dark stripes and the larger dark square. The curvy middle section (when viewed from the front) and the flashing position light (as the model was turned upside down, it's a top light here), comparable to the flashing ventral position lights of the Flaxian and Entharan ships make it clear that this is most likely a re-use of the model turned upside down. Filming the model like that is possible, as is made clear by the two shots from "Retrospect" that show the bottom of the model. It seems the Tak Tak weapons fire emanates from the two dark squares on the front of the wings.

After the model was briefly used in "Macrocosm", it was seen as the Entharan ship in "Retrospect" one year later and after that never appeared again on Star Trek.

This table summarizes all appearances of the ship model in chronological order: