by Bernd Schneider and Jörg Hillebrand

Kazon ships of several types and sizes were featured in the first three seasons of Star Trek: Voyager, and even more names for them: shuttle, fighter, patrol vessel, raider, small raider, frigate, carrier vessel and Predator class. Yet, only three Kazon (or Trabe) ship miniatures were used altogether, and only two of them more than just one time:

The Kazon raider/fighter model was designed by Dan Curry. He was inspired by the complex architecture of Lebbeus Woods.

Design sketch for the Kazon raider (thanks to Dan Curry)

The model building was subcontracted to WonderWorlds Inc. (formerly Brick Price's Movie Miniatures), who delivered it without the various familiar "wings" and other hull extensions. This early version of the model has a large window-like structure in the place of the bridge/cockpit module. It is not the same as the cockpit window of the fighter variant though. A bit understandably perhaps, the producers were not entirely happy with the sleek look and asked David Stipes to come up with possible design modifications. Since this was already six weeks into motion control photography, the footage of that model had to be re-shot in late October/early November 1994.

Side note Apparently under the assumption it was shown on screen, Galoob created a Micromachine of the wingless type.

The Kazon raider of Maje Culluh must be a ship with many decks, whereas the fighter or shuttle is a small vessel carried in the shuttlebay of a raider. We previously believed that there was only one miniature representing both ships, and that except for the customarily different lighting the raider and the fighter were absolutely identical on screen. There are subtle differences, however.

The larger Kazon raider with its characteristic two-deck bridge is the variant we can see on all known publicity photos of the ship model, on all clear depictions and diagrams in the Star Trek Fact Files, and in the form of the Revell/Monogram model kit. Yet, there is a previously unknown version of the shooting model for the fighter, using a cockpit module instead of the bridge. The possible existence of an interchangeable bridge module to turn a large raider into a single-seated fighter and back has been confirmed by Rick Sternbach. This version was depicted as late as in Christie's auction catalog of 2006. The difference between the two ships also becomes clear only on DVD caps, as will be demonstrated below.

In "Caretaker" two small Kazon ships can be seen landed on the Ocampa planet, and it is probably these two fighters that attack Voyager near the Caretaker Array before the mothership arrives. The maneuverable ships circle around Voyager, and they are definitely less than 20m long. Clearly they are meant to be fighters. On the screen cap from the latter scene we can notice that there is neither a distinguishable bridge module on the fighter, nor a cockpit window. The corresponding region on hull is flush. Most likely the fitting module was not yet finished at the time the pilot episode was shot (or, more precisely, was re-shot with the "cardboard" modifications as mentioned above).

The "Making of" on the DVD confirms the impression that the miniature is just not yet completed. The upper bow surface of the Kazon ship model is flush, no module of any type is present. Instead of a module there is some kind of blind apparently covering the openings for the lighting and possible connectors for the module (s). A thin seam runs across this part of the surface just where we would expect the later bridge module of the raider to be attached. Something interesting to observe is that the framework below the cockpit (or below what should be the cockpit) is filled with what looks like solid black. This is not so on the finished raider, but seems to be the case in all fighter appearances. Apparently the black color suggests another (albeit unlit) window.

Kazon fighter in "Making of 'Caretaker'"

Kazon raiders with the according bridge module instead of a cockpit window appear for the first time in "State of Flux". The spacious interior sets would make no sense if they were on a small fighter.

Kazon raiders in "State of Flux"

The young Kazon's vessel that is destroyed by Chakotay in the second-season episode "Initiations" is a small fighter. The episode marks the first on-screen appearance of the fighter cockpit module with its characteristic three-part window on either side, as seen in Christie's auction catalog of 2006. Perhaps surprisingly, the cockpit's premiere predates that of the larger raider's bridge module. The screen caps clearly show that the windows are not like openings in an otherwise flush upper bow surface, but that a raised module is put on the model. We can also notice that the openings in the ornament-like framework just below the bridge window are black and appear to be flush. They might supposed to be extensions of the cockpit windows.

Another Kazon ship appearance is in "Persistence of Vision", although only in an illusion created by the Bothans. The scenes show a fighter with the proper cockpit module. Only in one take there is no module, obviously because it is re-used from "Caretaker".

"Maneuvers" features Maje Culluh's ship, which is definitely a large raider as indicated by the multi-deck window lighting. The fly-by of the Kazon torpedo (which is some 8 meters long) and of Chakotay's Type-8 shuttlecraft prove Culluh's ship has several decks and a lower length limit of 80m. Moreover, there is at least one shuttlebay on the ship. In the close view it is interesting to notice that the already mentioned framework below the bridge module (one of the various cardboard-like add-ons) is hollow and the brownish hull shines through, as opposed to the black filling of the same structure on the fighter.

Yet, there is one small error in the episode "Maneuvers". In some takes the raider appears without the bridge module and therefore looks like a fighter. The reason is that this is actually stock footage from "Initiations".

Several Kazon/Trabe ships can be seen in "Alliances", the most prominent being the small fighter that attacks the conference room, again with a length of less than 20m. Definitely another fighter type. Note the already mentioned black "extra windows" underneath the cockpit module.

Both types can be seen in "Investigations" when Tom steals a small Kazon shuttle, which is shown just after it has been released from the much larger raider. The two types are outfitted correctly, the first with the cockpit module and without additional lighting, the latter with the bridge module and the lit window rows. We also get to see the inside of the cockpit. Although the windows don't really match their supposed outer appearance, it seems that the pilot looks out directly into space.

Kazon raider and fighter in "Investigations"

In "Basics I" the Kazon suicide saboteur's vessel is "not Culluh's ship, looks more like a shuttle", according to Chakotay. In other words, we are dealing with just another fighter. The story of the pilot, Tierna, implies that he must have taken the shuttle to flee from Culluh's ship. Although this is a lie, it is further evidence that Culluh's ship is a big raider and Tierna's shuttle is small enough to fit into the raider's shuttlebay.

Kazon fighter in "Basics I"

"Small raider" in "Basics I"

In the same episode Tuvok identifies the ships that permanently fire at the secondary command processor as "small raiders". These are much smaller than Voyager, as can be seen in some takes where they are unmistakably in front of the Federation ship, so they should actually be fighters. Nevertheless, these ships have the bridge module and are lighted as if they had several decks. Another appearance of the raider variant is at the beginning of "Basics II" where the vessel is destroyed by Tom Paris. This ship is larger than the Type-9 shuttle and is identified as "Kazon patrol vessel".

"Small raider" in "Basics I"

Except for two negligible errors (the re-use of fighter shots for the raider in "Maneuvers" and the bridge and window rows on some of the fighters in "Basics I"), the difference between the two variants was consistently maintained by the VFX staff. It is evident that raiders and fighters may not be the same size and that they were designed to be different from the very beginning of the show, although secondary literature pretends that there is only one ship type. Even if there were not the small visual difference between the two variants, we would have to assume two sizes for logical reasons. 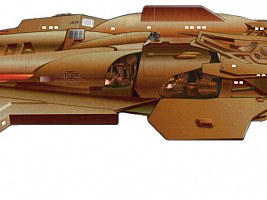 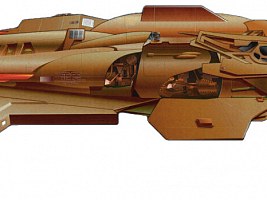 Still, the question arises why the Kazon who were supposed to be frequent guests in the series were not given two more distinct ship designs. Overall, the complex shape and numerous small external features of the raider/fighter model rather suit a bigger ship which is why the raider appears as the more realistic variant. Moreover, it is impractical that a fighter which is designed to land would have an "elephant trunk".

The few available VFX shots and the studio model itself can be used for a coarse size estimation of the larger raider. As already mentioned, the lower size limit from ship encounters is 80m. Except for the few windows there are no lifeboats, hatches or other external features pointing to the ship's size. A closer look, however, at the publicity shots of the Kazon raider (Revell/Monogram model kit box and Star Trek Fact Files) reveals that the window locations are not as arbitrary as they may appear. The episode "Maneuvers" shows even more lights that can be identified as windows. I have added all these windows to the inaccurate Fact Files schematic of the Kazon ship, and it works well with a deck count of 9 in the main part of the ship without the "elephant trunk". This yields a length of 160m under the assumption that the deck height is the same as on Federation starships. 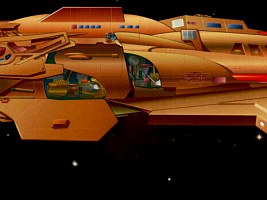 The carrier was also designed by Dan Curry. It is also called mothership type, a massive starship of about 1800m length. The ship being just huge, its size is largely consistent throughout the series. Carriers are featured in "Caretaker II", "Initiations", "Alliances", "Investigations" and "Basics I".

Design sketch for the Kazon carrier (thanks to Dan Curry)

Kazon Carrier in VOY: "Basics I" 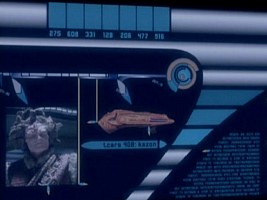 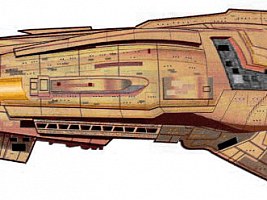 This is a small shuttle with a reinforced, arrowhead-like front, but a completely different design than the usual Kazon raider, fighter or shuttle. The torpedo's length is about 8m, based on the Fact Files schematic and comparison with people standing beside it when it has penetrated Voyager's hull in VOY: "Maneuvers". The Kazon torpedo didn't show up again in any episode. The Fact Files drawing of the torpedo has slightly inaccurate overall proportions and details. The front tip of the real model, for instance, is not quite as pointed, and its octagonal profile is more pronounced. The reason is that the Fact Files illustrator obviously reproduced the look of the Revell/Monogram model kit, rather than of the studio miniature. There are some differences between the miniature and the full-scale mock-up too. 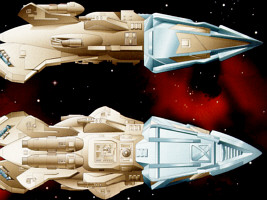 Thanks to Rick Sternbach for his support and to Thomas Småberg of The Guardian of Forever for additional information and some pictures from "Investigations" (only in the previous version of this article). Robert Minnes solved the mystery of the "cardboard additions". Some more photos are taken from the Model Citizen Reference Guide and Star Trek in Sound and Vision. Special thanks to Dan Curry for allowing us to use the design sketches!