In order to maintain a certain credibility of the fictional technology in Star Trek, starship design should not be entirely arbitrary, as outlined in the starship design guidelines. Among the many ways to design a new starship, taking available components and reassembling them in a different fashion is popular in fandom as well as in the TV production because it yields a fast result. No matter if it's a polystyrene miniature or a 2D or a 3D computer model, "kitbashing" is often the design method of choice.

But how does kitbashing translate to the real, 1/1 scale starship? Does the idea of assembling a ship from arbitrary available components make sense in-universe?

Note In the following, I will also refer to "real" Starfleet ships as kitbashes, since it's a popular concept in fan fiction and in accompanying literature to the series (such as the DS9TM).

The first ships with rearranged hull components of existing vessels date back to Franz Joseph's Star Fleet Technical Manual, here as simple 2D drawings. Many canon starship models that followed can be classified as kitbashes, at least in a broad sense. The Miranda-class USS Reliant from "Star Trek II" is a custom-built studio miniature and uses many new parts besides the obvious Constitution-class components, so technically it is much like an all-new design. Nevertheless, the Miranda probably inspired and justified the creation of many kitbashes for TNG and DS9 so as to provide more variations of Starfleet ships. The Constellation is another variant of the Constitution, this time with four warp nacelles. The original yellow model in Picard's ready room was built from Enterprise refit model kit parts. The miniature of the Sydney class, on the other hand, takes just the warp nacelles and bridge from the Constitution class, whereas the hull used to belong to the "Star Trek VI" executive shuttle. 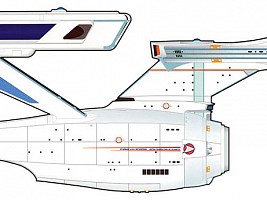 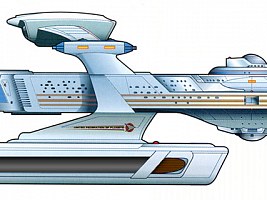 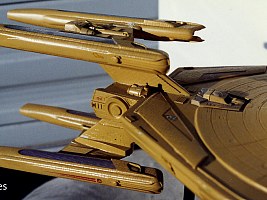 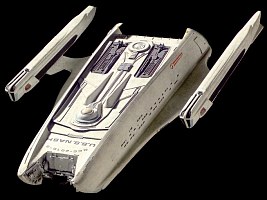 The Nebula class consists of many components that are identical as on the Galaxy class, and the ship is roughly the same size. Although the one-nacelled Freedom-class USS Firebrand looks bizarre, its design is a bit more plausible because it belongs to the Galaxy family, using the same type of nacelle. The same goes for the two-nacelled Challenger. While a fully-fledged studio model was built for the Nebula (although a kitbash version can be seen as set decoration) and for the Freedom, the Challenger is a kitbash in a narrow sense. The small-scale model is composed of parts from Enterprise-D model kits. 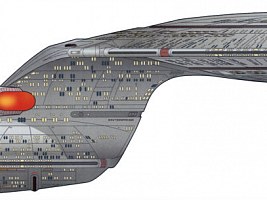 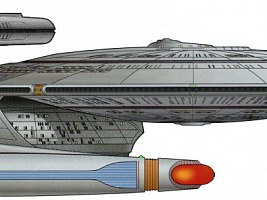 All the above ships have in common that each of them makes use of components of the same basic design and size within the same design generation, which is credible in so far as it could be a modular concept to enable these variants. The warp nacelles of the Constitution refit, for instance, could have been designed to be supplied with plasma from above or beneath. It is reasonable to assume that all ships of one design lineage (e.g. the Constitution/Miranda/Constellation family) or maybe many designs of a certain generation and size share a common modular structure, allowing easy replacing of components such as the bridge module, sensors, weapons, nacelles and nacelle pylons.

Some starships depicted in the DS9 Technical Manual, on the other hand, employ parts of considerably different kits, and hence of different ship designs. The USS Yeager is not further discussed here, because combining a Maquis raider hull inflated to absurd dimensions with a large Intrepid-class saucer is first and foremost a ridiculous example of scaling. The USS Centaur uses Excelsior components together with a Miranda weapon pod. Yet, the latter is scaled up or the first is scaled down. Likewise, the USS Curry is an Excelsior kitbash with Constitution-class nacelles, and it is not clear how large the nacelles actually are. They would be the same length as the Excelsior secondary hull and therefore much too large, if the one of the two AMT/Ertl models of the Enterprise-A or Reliant on one hand and the smaller scale Excelsior on the other hand had been used. To explain this would be rather a problem of scaling. Anyway, even if the nacelles have the correct size in relation to the Excelsior hull, there is still the question how the parts of the two considerably different designs can be connected. The same applies to the Intrepid/Constitution variant (USS Elkins), if this obscure ship really exists.

The DS9TM states that not only the models (which are not mentioned at all in the book that is written from an in-universe perspective) but the real starships are actually kitbash jobs. They are said to be composed of different unfinished or salvaged components: "The following spacecrafts were constructed from salvaged components, components in work, and custom assemblies fabricated by the individual fleet yards. Those vessels not destroyed or damaged beyond salvageability were returned to Starfleet bases and yards for rework back to their respective major classes or repaired and returned to service."

So the impression is created that real Starfleet engineers, like modelers, could take arbitrary components and put them together to whatever starship they'd like to build. In contrast, a "good" model like the Constellation is definitely not supposed to be a kitbash in 1/1 scale. It is obvious that the design of the Constellation nacelles is based on the Miranda nacelles (or the other way round), but Starfleet definitely didn't rip off nacelles from Miranda-class ships and chopped off the ends. They certainly built custom nacelles of a similar type for the new ship (provided the Constellation is a newer design). So we can assume that the "real" Constellation, unlike the model, is not a kitbash.

Designing a ship assembled from already existing components, which have not been intended for this exact purpose, is much like creating a completely new prototype. Firstly, there is the problem of the mere mechanical connection which would require extensive design and simulation before the fleet yards can even think of putting the two pieces together. Secondly, countless plasma conduits, data transfer lines, environmental supply pipes (water, air, waste etc.), transporter channels, Jefferies tubes, turbolift shafts and corridors are to be connected. They would have to be completely redesigned on at least one side so as to provide a compatible interface. Thirdly, because of the new hull shape the ship as a whole would require additional simulations and probably extensive redesign prior to construction. This would have to include impulse propulsion, warp field, IDF, SIF, shields and navigational deflector simulations, for instance, and also an adaptation of computer control architecture and software. The TNG Technical Manual gives an impression of the complexity of such systems and how much time it takes to develop a new ship. Even if most of the design checks and simulations described there can be skipped, it is not credible that a kitbashed ship can be planned and built within a few months.

There must be a good reason for "real-ship" kitbashing to make all the above efforts worth while. In fan fiction and RPGs kitbashed ships are sometimes described as having a better performance than their basic designs. This isn't realistic. It is true that from the viewpoint of engineering it is often deemed useful to merge the benefits of two designs into a new one. This new design, however, will not look like a combination of the existing parts, because such a mere kitbash would most likely have a worse performance than either of the original designs. This is because the single components have been designed for optimum performance in a specific application mode but are used differently in a kitbash. Even if it's an awkward example, if you put the body of a Land Rover on the undercarriage of a Ferrari, you get a lousy ATV and a lousy sports car. In order to exceed the performance of a mere kitbash, the new design should use new components. A popular mistake is that an "upgraded ship" with an additional warp nacelle should be faster and additional phaser banks should render the ship stronger than the original design. If we leave aside obscure Treknology arguments, a faster or stronger ship would require more power (the physical quantity, not the common meaning) in the first place, while the number of nacelles and phasers, respectively, would be at most a secondary consideration. Sorry for making up another automotive analogy, but no one would expect a car with six wheels to be generally faster than a normal four-wheeled car.

Combining parts that are on different technology levels is something that real engineers would shy away from as well. An 80-year old design is just that - old. It would not make sense to salvage parts or even build new ones from old plans for use on new ship classes. At most we could imagine that a ship like the Intrepid-Constitution might serve as a testbed (either for the saucer or for nacelle coils). Other than that, combining old and new design components would be much like fitting a state-of-the-art computer with surplus 4MB RAM modules.

The rationale for the "real-ship" kitbashing cited in the DS9 Technical Manual is that the ships were urgently needed and therefore hastily assembled from existing components. Weighing the required efforts vs. expected performance of such ships, it is questionable if Starfleet would really waste both material and human resources for them. Moreover, even if it was deemed necessary to use any available ships, sending them into a war would be much like a suicide mission for the crews. A war always needs simple and proven designs that can be built rapidly (like German U-Boote or Allied corvettes of WW II) and not an experimental "Frankenstein fleet" of components that were never designed to operate together.

Summarizing, there are credible rearrangements of ship components like the Miranda, Constellation and Nebula, provided that their original designs are modular to some degree and the variant makes sense in that it provides different properties. It is a matter of taste to call them (the real ships) kitbashed. The ships from the DS9 Technical Manual are at most of limited usefulness, for they cannot be expected to be very powerful on one hand, and on the other hand they don't look like they are supposed to go into a series production making the design efforts worth while. The may act as testbeds but are certainly not fit to be frontline ships.

Besides the previously mentioned examples, there are some more kitbashes that appeared on screen, for instance the New Orleans and Cheyenne classes. Yet, only the miniatures of these two designs do actually employ (modified) components of other ships, namely the Galaxy class. The full-scale ships are supposed to be much smaller and therefore no Galaxy variants.