Redresses of the Reptohumanoid Ship

One of the first computer-generated models of Star Trek Voyager was the vessel of the unnamed reptile-humanoid species in VOY: "Parturition". The model was then used for three or four more species in the series, occasionally with slight modifications. In chronological order we could see the CGI as:

In its original appearance the CG model consists of a streamlined main hull with large delta-shaped wings into which the slender engine nacelles are embedded. A distinct oval section with a cavity much like the deflector on a Federation starship can be found on the fore end of the vessel, connected to the nacelle front tips with comparably thin struts. This is the actual orientation of the Reptohumanoid ship; the pointed end is really the aft end unlike common sense may tell us when we just look at the stills! Actually, Rick Sternbach intended the pointed end to be the front end, but that was misinterpreted by the VFX staff. Something remarkable is that the color of the forward section (with the exception of the crest atop) and the struts is brownish, unlike the rest of the ship which appears to be almost plain gray. The deflector and small parts of the nacelles are purple. There are many illuminated window rows, indicating that the ship must be very large. 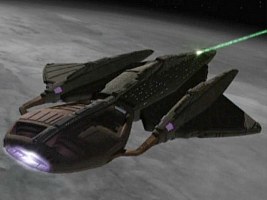 For this ship of Vidiian design in VOY: "Deadlock" the model was altered. Most obviously the front end with the deflector was totally removed. The orientation of the Reptohumanoid ship was retained though. On the Vidiian ship, however, struts run from the nacelle aft ends to the ship's aft end to which some sort of engine exhaust was added. The Reptohumanoid ship had no visible impulse engines whatsoever. The color was changed too, now varying from bright brown to ochre. The lighting of the windows may have remained exactly the same, whereas the engine color is orange instead of purple.

The model returned as a Vidiian ship in VOY: "Fury" with slight revisions, essentially only to the tentacles that are used to cut holes into an enemy ship's hull.

The model is visible only in the far background at the Antarian Rally in "Drive", on the right behind "Qatai's vessel". We can only see the long pointed part of the main body, and it is obviously meant to be the front tip here. Unlike most other spectator and participating ships that simply don't belong into this region of space, it could be a Nygean vessel, not unlike the prison transport that will appear later in the season. We assume that the model was not modified in any fashion for its use in this episode, but since we don't see the end with the deflector pod don't know whether it is the Reptohumanoid or the Vidiian version.

The ship model was modified again to represent Gar's vessel in VOY: "Critical Care". The deflector housing of the Reptohumanoid ship was added again, but now it acts as the aft section, the previous deflector now being the engine exhaust. The additional parts of the Vidiian ship are not present. The most significant alteration of the CG model is that a cockpit window was added, along with other structures on the dorsal side, obviously to insinuate that the vessel is a lot smaller than in its previous incarnations. As a matter of course the many window rows were removed (or rather not illuminated) for the Dralian version. The ship also has a different color. It is overall beige, maybe greenish, with several clearly green areas. The lighting of the engines is much more extensive than on the corresponding parts of the Reptohumanoid version, and is yellow instead of purple. The Fact Files depiction of this vessel is correct. 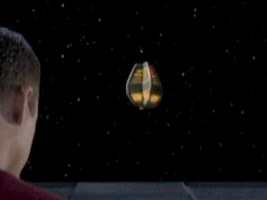 In addition, the decoy used by Gar in the same episode consists of two aft sections of his vessel, with the same yellow illumination, connected to form an "X". Although it may have been supposed to indicate a design lineage, we wouldn't expect a decoy to look like a much bigger engine pod, so in an in-universe view the similarity may be largely incidental.

The CG model could be seen in VOY: "Repentance" as the Nygean prison transport. This ship is essentially identical to the original Reptohumanoid version. The hull color looks somewhat different in the episode but may be the same on the Nygean ship. The only significant difference is that the Nygean ship has the opposite orientation, the same as the Dralian ship. We come to that conclusion because it obviously has to be the engine section that is burning when Voyager comes to help the vessel in distress. The very aft end of the engine may be yellow unlike the purple shine of the intact part of the nacelles, but most likely the yellow color is just because of the fire. The Fact Files depiction of this vessel is incorrect because it actually shows the Dralian version.

The last appearance of the model is in ENT: "Broken Bow". When the Enterprise shuttle approaches the landing platform on Rigel X, we can see it on the lower right of the screen, occupying a lower platform. Some time later, when the crew is returning to the platform in the elevator, we can see that shuttle again, and a second one that is just flying away. The shuttle on Rigel X is lighted just as the Dralian variant, and the orientation is the same too. Most likely there are no modification to the model, which is barely recognizable anyway.

Thanks to Doug Drexler for posting the great renders of all vessels.