Redresses of the Talarian Observation Craft

A miniature of the Talarian observation craft, designed by Rick Sternbach, was built from scratch to appear in TNG: "Suddenly Human". The ship model was then substantially modified to represent the Tamarian Warship in TNG: "Darmok". After that, the miniature could be seen on four more occasions. These are the appearances in chronological order:

The model was slightly modified for each of the five new appearances. There is no usage of stock footage of the ship in any of its variants. New shots were made with the model for each episode.

The studio model originally appears at the beginning of TNG: "Suddenly Human" as the Talarian observation craft. It is built to resemble the Talarian Warship with its characteristic diagonal wings that shows up later in the same episode but probably doesn't use the same parts. The observation craft consists of a tapered front (habitat) section, an aft (engine) section comprising three angular hull parts, short and almost rectangular horizontal wings and long triangular vertical wings, the latter resembling solar panels. The overall hull color is ochre. 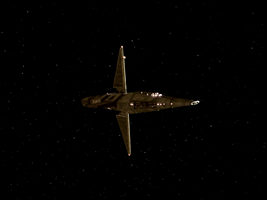 As a general remark about the Talarian/Tamarian studio miniature, it is very likely mounted on a rod that is affixed to the underside. This is why takes from above pose no problem, as the mount would be invisible. It seems that for all shots supposed to show the ventral side actually the top side was filmed, and everything was just flipped over or turned by 180 degrees afterwards. There are only few differences between the two hull halves anyway, for example the bridge module as it most likely can be found on the top side only. This is why in all takes intended to show the underside the bridge module is visible. In DS9: "Armageddon Game" the ship can be seen from both angles, and so the T'Lani ship seemingly has a bridge module with lit windows on both sides. In all other episodes we see just one side of the ship, the top of the model, and therefore there is always a bridge module present.

Note Actually, the Talarian observation craft has one further appearance in the form of stock footage, but this is obviously an error. In TNG: "The Perfect Mate" we can see one Kriosian ship. It appears towards the end of the episode to take over the Kriosian ambassador. What we see is a re-used scene from "Suddenly Human", more precisely the Talarian observation craft (the one with the upright wings) that floats in space alongside the Enterprise. The next scene takes place in the transporter room where the ambassador says good-bye to Picard. After that we see the ambassador's ship leave, but this time it is the Talarian warship (the one with the diagonal wings). It is obvious that only one of the two can be the "true" ship, and we might want to decide in favor of the warship, which was on screen for a longer time. Moreover, this design seems to be commonly used not only by the Talarians and the Kriosians but also by the Hekarans, Frunalians and Boslic. The original Talarian observation craft, on the other hand, never returns to the screen.

Let us have a look at the significant modifications from the Talarian to the Tamarian ship. First of all the vertical wings or fins were completely removed. Then the model was overall repainted. While the Talarian ship used to be beige-brownish it will be gray in all other appearances. There were some subtle changes to the color scheme later, as will be shown below. A couple of new parts were added to the miniature. Two warp nacelles were affixed to the horizontal wings of the former Talarian observation craft. Two additional wings were added to the very aft section. These connect to the warp engines as well. The result is a system of warp pylons between the 2nd and 4th section of the main hull and the warp pylons. Finally two wings run from the warp nacelles outward.

The first appearance of this completely reworked model is as the Tamarian warship in TNG: "Darmok". Here the apparently big ship can be seen on an MSD and from the outside in several takes, but all of them just show the lower surface. It is evident that only one side was filmed all the time: the side with the bridge module, which we can suppose is still on the top on the modified model. The film was flipped, and what we see is a bridge module on the ventral side. 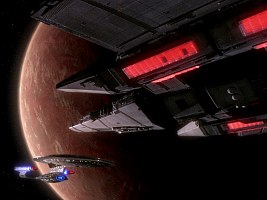 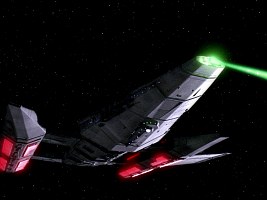 The warp nacelles of the Tamarian ship are glowing red. There is one error in the Fact Files depiction where only the bottom side of the nacelles is lit. But actually both sides are red, as both screen caps reveal. This holds true for all other appearances of the ship provided that we can have at least a glimpse of the otherwise invisible side of the ship (the bottom side of the filming miniature). The Tamarian ship still has the tapered front and end caps on the nacelles that will be removed some time later.

The next variant in chronological order to be analyzed is the Klaestron vessel of DS9: "Dax". The most obvious difference is that the nacelles are now blue instead of red, and it seems to be a brighter blue than later on the Drayan or the Bothan ship. As already mentioned, this ship like most other variants can only be seen from one side. In the case of the Klaestron ship it is the dorsal side, which also happens to be the top side of the miniature with the bridge. We also see that the underside of the nacelles is lit as well. The Klaestron ship still has the tapered nacelle front and rear pieces like the Tamarian ship. 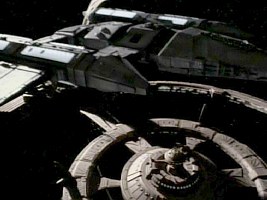 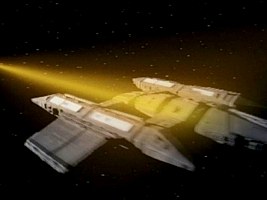 It remains to be noted that the Klaestron vessel is obviously supposed to be considerably smaller than the Tamarian vessel, as the comparison with Deep Space 9 shows a ship of just around 200m length.

The miniature was modified more extensively for its next incarnation as the T'Lani cruiser in DS9: "Armageddon Game". The color of the nacelles was changed to orange, unlike the red color on the Tamarian ship. In addition, the hull color was changed in some places: There are faint red areas instead of a uniform gray. The nose section and the wings now sport the T'Lani emblem, which is the same on the top and the bottom side.

Note The T'Lani emblem is not identical to the better known Harvester symbol as it is depicted in the Star Trek Encyclopedia II, for instance. 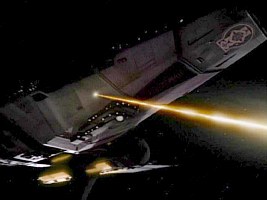 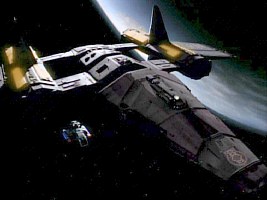 This takes us to one peculiarity of this appearance, that it is the only time we see both halves of the ship, but actually just the top side of the model with the bridge section. The four nacelle caps (front and rear on port and starboard, respectively) were all removed. They were taken and glued vertically onto the nacelles, now facing up and down, respectively! Rounded caps were put onto the front ends of the two nacelles. It is not visible if the same was done at the rear ends.

The MSD of the T'Lani ship seen in the episode bears an error: Here the pointed nacelle caps are still present; the diagram undoubtedly shows the Tamarian version prior to the modifications.

The size comparison with the Federation runabout gives us a length of about 350m, probably larger than the Klaestron ship, which may look different enough to be unrelated.

Although it may be just an illusion, let us have a look at the Bothan ship. It appears in only few takes, but some details are clearly visible. Once again the nacelle glow changed, this time to blue-violet, which is unlike the bright blue of the Klaestron ship and the deep blue of the Drayan vessel. The basic configuration with the formerly pointed and now rounded nacelle caps remained the same as on the T'Lani ship. We can see the underside on film (apparently with a dark bridge), and there is also a view almost straight from the side, now apparently with the model filmed upside up and therefore a lit bridge on top. We can also see the red color and even the T'Lani emblem from the miniature's previous life. It is possible that the aft end of each nacelle is lit just like on the Drayan ship that will appear later on Voyager. 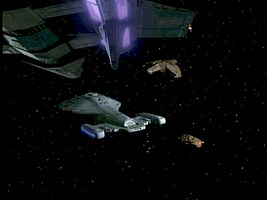 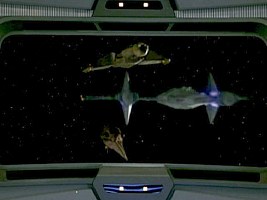 Bothan ship, side in VOY: "Persistence of Vision"

It is obvious that in spite the similarity above all to the T'Lani vessel the Bothan design is not supposed to be related to any of the above. Fundamentally the Bothan ship just plays the role of a "generic alien vessel", and no work was put into giving it the required unique look.

Finally, there is the Drayan vessel from VOY: "Innocence". Its nacelle glow medium blue. The bridge is on the top. The spikes on the nacelles, formerly the nacelle end caps, are completely removed. The front end of the nacelles is round as in the previous two versions. While it was not visible on the T'Lani cruiser and barely visible on the Bothan ship, we can see the nacelle aft ends on the Drayan ship, which shine in the same blue color as the rest of the nacelles. We can only speculate if this was the same as soon as on the T'Lani ship. It is uncertain if the T'Lani sticker was removed from the Drayan ship. But this seems likely because the hull color was modified once again. This time a some section of the tapered main hull was painted bluish. 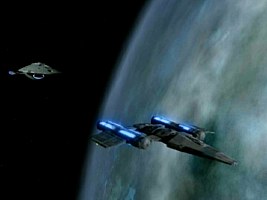 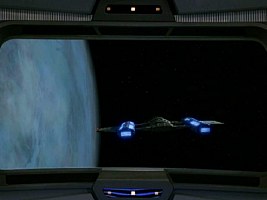 The close resemblance of the big Drayan ship to the Drayan shuttle from the same episode is no coincidence: While the first is based on the Talarian observation craft, the latter is a modification of the Talarian warship. Both vessels sport the Drayan emblem.

Here is a table with all modifications to the miniature at a glance:

Finally a tip: Open each of the five clickable side views, beginning with the Tamarian version, in a new browser tab or window and enjoy!