Redresses of the Talarian Warship

The model of the Talarian warship was constructed at the same time as the Talarian observation craft. The warship was supposed to be a larger and more powerful vessel. After its role as the Talarian vessel, the miniature appeared seven more times in service of at least six different species. These are the appearances in chronological order:

Overall, the structure of the Talarian warship is akin to the Talarian observation craft, indicating a design lineage. The most obvious difference between them is that the warship has diagonal panels or wings. While it is possible that some custom parts are identical on both ships, provided that the two miniatures are the same size, the warship uses most of the hull of an Imperial Star Destroyer model, without the superstructures, as its main section.

The warship studio miniature and especially the arrangement of its panels or wings was modified three times, as will become clear in the analysis. Apparent discontinuities of the model's look can be explained easily, as three of the appearances are just stock footage.

Three of the original Talarian warships appear in TNG: "Suddenly Human"; one of them, the Q'Maire, is commanded by Captain Endar. The vessel is composed of a large tapered main hull, a thin middle section to which four "wings" are attached, and a somewhat wider engine section at the aft end. The color is ochre. As already mentioned, the ship will appear seven more times, but surprisingly it is the first and the last time that it is shot in its original configuration and color, not counting in the usage of stock footage in two episodes. 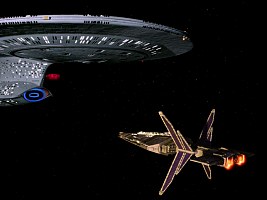 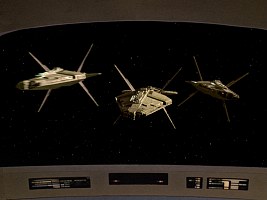 From a size comparison with the Enterprise-D we get the impression that the warship is some 230m long.

The Talarian warship without its wings can be spotted in the junkyard at Qualor II in TNG: "Unification I" in the background and once again from a different angle in the foreground of "Unification II". It still needs a logical explanation how the depicted ships could switch places. See the complete Analysis of the Qualor II Surplus Depot. Closer examination shows us that not only the four X-wings are missing but also that the two small wings from the engine section were moved forward to where the diagonal panels were attached to the middle section. Also, the color of the ship is now plain gray, which may be merely a matter of lighting though.

Talarian ship in TNG: "Unification I"

The X-wings are present on the Lysian destroyer in TNG: "Conundrum" again. But if we look more closely, we notice that they are not where they used to be on the Talarian ship. The Lysian wings are affixed to the top of the mid section, which is no surprise considering that the wings of the aft section are on the sides of the mid section since "Unification I". Moreover, on the Lysian vessel the wings slope up at 45°, whereas it was more like 60° on the Talarian version.

Something else to notice is that this ship was filmed upside down. The supposed underside of the firing Lysian vessel on the screen cap exhibits the same thin superstructure as it can be seen on the top of the Talarian and the Qualor scrapyard vessel. The color of the Lysian ship seems to be still overall brownish, but with a purple hue.

Finally, unless the second pair was considerably shortened so it wouldn't be visible in the two shots the ship is seen, there is a pair of wings only on the bottom (the former top side). 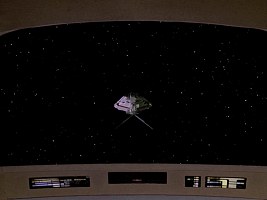 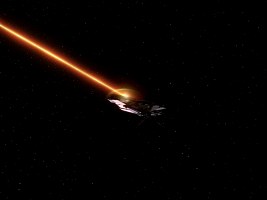 The Kriosian vessel in TNG: "The Perfect Mate" is just stock footage from TNG: "Suddenly Human", so there is nothing particular to observe. But it is worth mentioning that we first see a re-used scene from "Suddenly Human", more precisely the Talarian observation craft (the one with the upright wings) that floats in space alongside the Enterprise. The next scene takes place in the transporter room where the Kriosian ambassador says good-bye to Picard. After that we see the ambassador's ship leave, but this time it is the Talarian warship (the one with the diagonal wings). It is obvious that only one of the two can be the "true" ship, and we might want to decide in favor of the warship, which was on screen for a longer time. Moreover, this design seems to be commonly used not only by the Talarians and the Kriosians but possibly by all other races listed here.

The next appearance of the model is in DS9: "Emissary". The scenes of the Frunalian vessels arriving at DS9 are clearly shot for this particular episode. The surprise is that the vessels look exactly like the original Talarian ship; only the color is now gray instead of brownish. Obviously the effort to return to the old configuration was deemed useful by the model builders. 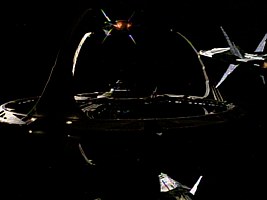 The Valerian ship Sherval Das ship can be seen docked to the station in DS9: "Dramatis Personae". New shots were made of the model for this purpose. It is remarkable that the takes with the docked vessel show the actual underside of the model and not the top side like on the flipped film in TNG: "Conundrum". The configuration of the Valerian ship seems to be identical to the Frunalian version.

This is the last time that new scenes were filmed with this version of the miniature. The two following appearances are entirely stock footage.

The episode TNG: "Force of Nature" only shows stock footage of the Talarian vessel from TNG: "Suddenly Human". Hence, it is not surprising to see the old look of the model once more.

The episode DS9: "Sons of Mogh" only shows stock footage of the Valerian vessel from DS9: "Dramatis Personae".

A Talarian emblem appeared as soon in TNG: "Heart of Glory" on the freighter Batris. It can be seen on a wall while the Enterprise crew is searching for survivors. The same emblem can be seen in TNG: "Suddenly Human", here on a computer screen and flipped horizontally. It is remarkable that the set designers brought in so much continuity in details, considering that the two episodes were two and a half years apart.

Most likely the same emblem is visible on the ventral hull of the Valerian/Boslic vessel. It is not far-fetched to assume that it was present as soon as on the Talarian warship and until the new shots in DS9 we just couldn't look close enough to recognize it. It might also indicate that the ship has either never actually been repainted or that the logo was spared although it wouldn't make sense on anything else but a Talarian vessel. 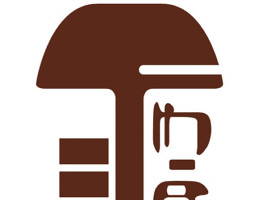 After it had consistently appeared as a larger vessel, the miniature was redressed one final time for VOY: "Innocence", this time to act as the Drayan shuttle. This is interesting, considering that the shuttle, just like the big Drayan ship from the same episode, have a common origin in Talarian designs built for TNG: "Suddenly Human". The picture from the catalogue of Christie's 40th anniversary auction shows details of the final state of the Talarian warship model as Drayan shuttle. The core of the vessel with the tapered Star Destroyer hull and the aft section with the engine pod is essentially still the same. Engine nacelles were added in the place of the former small horizontal wings at the aft end. The "solar panels" were removed. The new cockpit, a custom-made part just like the nacelles, does a good job to let the ship look small now. The model was repainted with a blue stripe just like the one on the Drayan warship. The blue color of the engines is the same on both Drayan ships. 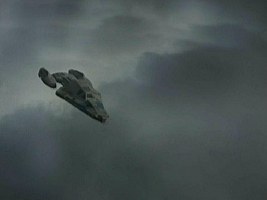 Finally, the shuttle sports what looks like a Drayan emblem (which is recognizable on the big Drayan ship too). 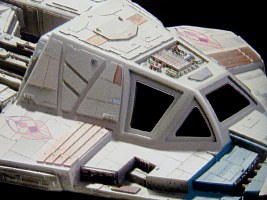 Here is a table with all versions of the miniature at a glance:

Thanks to Coelian for the hint about the probably missing wing pair on the Lysian destroyer.