Star Trek Discovery reimagines or redefines many staples of Star Trek. The total redesign of the Klingons is the arguably most dramatic among the many deliberate visual changes in the series. The species doesn't only lose the hair, but essential features of the Klingon body look totally different than the established appearances of TOS Klingons or TMP Klingons. In addition, their whole styling and technology, including starships, architecture, equipment and clothing, was altered beyond recognition.

Considering that its creators tell us that Discovery takes place in the Prime Universe, it is not possible to simply overlook the radical visual alterations made for the series. Without an official blessing, it is not possible for fans to dismiss Discovery and slap a "total reboot" or even a "non-canon" label on it, even if it is effectively a reboot and disregards essential parts of the canon. So even though much about Discovery feels wrong (not to say *is* wrong), EAS has to take care of issues like the Klingon redesign in some fashion. However, that still doesn't mean that EAS will cobble together speculative theories to make Discovery fit with canon.

Various arguments are brought forward in defense of the redesign:

Speculation and wishful thinking doesn't help to make sense of the DIS Klingons, so let us stick with the facts. The following analysis shows how much the Discovery Klingons were changed and whether or not it could be possible to make them fit with canon. And yes, canon definitely includes visuals, as opposed to what some people want to make us believe in the wake of Discovery's repercussions.

Comparison of "Classic" and Discovery Klingons

We may want to add to the list that Discovery Klingons are unwieldy, compared to any of their predecessors of classic Star Trek. They also speak slowly, and with distorted voices.

In a revision of the revision, the Discovery Klingons get back their hair for season 2. Additionally, a few new characters such as Kol-Sha in DIS: "Point of Light" and the unnamed man on L'Rell's bridge in "Such Sweet Sorrow II" are given a make-up that is closer to the universally accepted look. L'Rell even loses a third of her skull volume, but this particular change remains an inexplicable exception. Other "long-headed" Klingons can still be seen in season 2. The growth of hair is explained in DIS: "Point of Light" as a tradition after the end of a war, as previously suggested by Mary Chieffo at New York Comic Con. The previous idea that there are sensory organs that must not be covered with hair is definitely obsolete now. 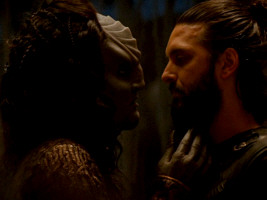 Kol-Sha in DIS: "Point of Light"

The notion that all Klingons without exception are bald during a war is absurd, considering that classic Klingons were more or less always at war in the 22nd, in the 23rd and in the 24th century and all of them always had hair (the only exception being General Chang). All Klingons of the different houses of Discovery, in contrast, had no hair even before T'Kuvma made the surprising suggestion to go to war against the Federation. Klingon children had no hair in T'Kuvma's flashback, and Mirror Voq was hairless as well. Perhaps the political changes brought about by L'Rell are the actual reason why Klingons grow hair again and never give up this custom again. But this conflicts with the uninterrupted continuity of classic "hairy" Klingons, and quite paradoxically Discovery postulates that the Klingons have totally conformist traditions at a time when they are said to be totally divided.

In any case, those Discovery Klingons must have amazing razors!

(Most) Klingons mutated in this order: TMP appearance to TOS to DIS to TOS to TMP

The beginning of the 100-year isolation of the Klingons mentioned in DIS: "The Vulcan Hello" corresponds to the time of ENT: "Divergence" when the Klingons began to mutate from the TMP to the TOS look. This period (in which no human has seen any Klingons?!) may serve as a loophole to explain the new mutation in a future episode.

DIS Klingons were an isolated sub-species that vanished after DIS

In season 1, the focus is on T'Kuvma and his closest allies. They all share the rare traits, while the actual majority of Klingons, the ones that might look as in TMP or even in TOS, are what seems to be a minority in Discovery.

The official policy, as by the repeated affirmations of the producers, is that Discovery is set in the Prime Universe and adheres to canon. If this is true, they have exempted visuals from canon, so Discovery is a reboot, but "only" on the visual side. In other words, we have to imagine that all Klingons always looked like in DIS. The return of their hair in season 2 is supposed to make the acceptance of the official policy easier but raises even more questions.

Well, that is a conclusion we may draw for ourselves. But it is not supported by the official canon policy, which dictates that Discovery is "only" a visual reimagination.

Summarizing, Discovery fails to do two substantial things to justify the total redesign of the Klingons: give us a sufficient number of "classic" Klingons, and serve us some explanation why key figures of the Empire of the 23rd century (as well as their ships and styling) don't look familiar at all. The series has chosen to show only Klingons that look like T'Kuvma, L'Rell and Voq, by which Discovery implicitly declares itself a (total or visual) reboot, irrespective of all affirmations to the contrary.

The Klingons get back their hair and some other familiar features in season 2, but this is only damage control, in an attempt to make the unloved reboot series a bit more relatable.

Visual continuity has always been a quality mark of Star Trek, and an important part of its canon. With the extreme redesign of the Klingons and of everything related to them (such as the starships), Discovery has abandoned this longstanding principle. The purported reason is that the producers of the series wanted to appeal to a "modern audience". But does this mean a total reboot was inevitable?

It is clear that Discovery couldn't have been made with the crude visual effects of the 1960s, with sets consisting of colorfully illuminated walls and with mustached TOS Klingons. There are wonderful fan-made TOS revivals such as Star Trek New Voyages and Star Trek Continues, but hardly any fan would honestly demand from a modern TV series to look like that (although this is a customary strawman used in an attempt to discredit my actual position). In fact, we already have an awesome and well-established Klingon make-up and styling since "Star Trek: The Motion Picture". There was nothing wrong or dated about the iconic look of the TMP Klingons and about their almost equally famous ship designs, like the D7/K't'inga or the Bird-of-Prey. They used to be the arguably most recognizable aliens of any science fiction series. Even casual fans and people with otherwise no ties to Star Trek were fond of the Klingon looks.

Still, the makers of Discovery decided to throw this legacy away. They replaced our beloved Klingons with a clumsy race that is barely capable of clear articulation and whose styling is ridiculously overblown. They turned one of the most formidable sci-fi civilizations ever created into a pseudo-religious xenophobic sect with foolish leaders. I could feel a little bit better about the unwarranted redesign of the Klingons if it were successful. The USS Enterprise NCC-1701 suffered a similar fate in Discovery, but the visual reboot of the ship in "Will You Take My Hand?" is at least aesthetically pleasing and still looks like an Enterprise. In contrast, everything about the all-new Klingons is just appalling.

It is true that Star Trek had plenty of inconsistent visuals already before Discovery, and few people have cared more for them than me. But with the new Klingons and some other questionable design decisions the makers of the series cross a line. We're not talking about the Trills, a race that appeared just once on TNG before it was decided to alter their appearance for DS9. We're not talking about make-up updates thanks to new techniques, like the moving antennae of the Andorians on Enterprise. We're not talking about something that may ever make sense in canon or only in our headcanon, like the previous changes to the Klingons. Discovery is and will always be visually incompatible with everything that came before. The visuals are one of several aspects in which Discovery is Star Trek in name only.

Discovery does not try to extend the painting the way that all previous series did, including Enterprise. It paints all over the canvas of the existing Star Trek. Setting the series in the 2250s was the first big mistake because canon problems are inevitable once new stories are shoehorned into an era that is already taken by an old series. It is odd how the producers themselves lament this setting as if they didn't anticipate the problems (Discovery being the third prequel in a row).

The second mistake, the visual redefinition, may have been more tolerable in a series set in an unclaimed era, and preferably in the future. It may have even been possible without any harm to the old Star Trek. Imagine Discovery were set in the 25th century and the new aliens are no Klingons but a race not yet encountered. The story could be still the same; only the token nostalgia, such as the character of Sarek, would have to be removed to that end.

With its actual setting, however, the series only adds insult to injury in a "historical" in-universe context. It is like the redesigned Klingons, ship designs, clothes and interiors speak to us, saying that the look of the old Star Trek was crap and that only the latest visual update is endorsed. I don't want to imply that the Discovery producers and production designers hate the style of the pre-existing Star Trek and wanted to get away with it at any rate. They may have done their best to make the design of the series work for themselves. But whatever their self-perception is, they totally failed to pay the old Star Trek the due respect. From now, watching the old Star Trek with the old Klingons is impaired by the knowledge that the manufacturer has ended the support for this legacy product.

It is good that the Klingons got back their hair and familiar looking ships in season 2. While this is only a small step on a very painful way to reconcile DIS with classic Star Trek, it shows that the people in charge listen to justified complaints and are willing to revise at least the worst errors of the series. Yet, I would have preferred a series that wouldn't make such glaringly obvious errors in the first place.

Thanks to Chris for the hint about the STID Klingons with hair and to Charles Eavenson II for the mentions of Klingon hair and claws, as well as the observation about the "reptilian ears".