In addition to the Earth Starfleet emblem, a variety of other Starfleet- or space-related logos of the 22nd century appeared on Star Trek Enterprise. This article lists all logos that could be seen in the series, including some obscure ones, complete with accurate reconstructions by Brad Wilder.

All crew uniforms of Enterprise NX-01, except for Phlox's and T'Pol's, have the ship patch on the left shoulder. T'Pol only wears the Enterprise patch in the fourth and final season. The emblem is also found on spacesuits and on pieces of equipment.

Enterprise patch in ENT: "The Shipment"

Enterprise patch in ENT: "Babel One"

The individual ship patch of the Intrepid can be seen in ENT: "The Expanse". The motto "In mare, in coelo" means "On the sea, in the heavens".

Intrepid patch in ENT: "The Expanse"

Besides the customary shoulder patch, we can see the individual ship emblem (together with the Starfleet emblem) on the wall of the captain's mess hall aboard Columbia NX-02 in ENT: "Affliction". The motto is "Audentes fortuna juvat" ("Fortune Favors the Bold").

Ensign Latrelle, who is contacted by Hoshi in ENT: "Silent Enemy", has a shoulder patch, which in real life represents the NASA Mission Control Center in Houston. Since it is barely visible in the episode, it was apparently not deemed necessary to design a distinct emblem. It is not mentioned whether Latrelle serves on a starship or elsewhere in Starfleet, but since he is sitting inside something like a bunk, it is very likely a ship.

The NX Project emblem appears in many places in ENT: "First Flight": one big and several small versions in the hangar, on the hull of the warp ship prototype, as a patch on the pressure suit and inside the control room. The patch is also on display in the 602 Club but hardly recognizable there.

The Starfleet Research Center emblem can be seen in ENT: "First Flight", in a separate location and not as part of as part of the emblem wall on the opposite side of the control room.

Besides the one on the emblem wall, we can see the Starfleet Mission Control logo in the NX Prototype hangar and on Archer's and Robinson's pressure suits. The motto is "Res gesta per excellentiam" ("Things done through excellence").

The Security Division patch shows up in ENT: "Affliction". Although "Starfleet" is not written on the patch, the "boomerang" clearly identifies the Security Division as a Starfleet department. The arrangement of the three hexagons, on the other hand, dates back to a security logo design for "Star Trek: The Motion Picture".

The Enterprise MACO emblem can be seen on uniforms and on spacesuits in the third season. The MACOs may not be a branch of Starfleet but are stationed on a Starfleet ship and hence included here.

MACO insignia
(It's a Wrap!)

In ENT: "Cold Station 12", we can see the logo of the eponymous research station as a patch on lab coats but also on some Starfleet uniforms. Furthermore, the logo appears as a sticker on different walls and consoles, including the "blinking tubes".

The ship emblem of the ECS Fortunate can be seen in several places in ENT: "Fortunate Son". The patches are colored, whereas cargo and wall labels are monochrome.

ECS Fortunate sticker
(It's a Wrap!)

Just like the ECS Fortunate, the Horizon too has its individual emblem that is displayed on the clothes of the crew members (in color), as well as on cargo and equipment, and prominently on the bridge (monochrome).

ECS Horizon patch
(It's a Wrap!)

Orpheus patch
(It's a Wrap!)

Orpheus monitor emblem
(It's a Wrap!)

Orpheus sticker
(It's a Wrap!)

Several patches related to Earth Starfleet's space programs appear in the 202 Club. We can see some familiar logos but also some new ones:

It is clear that this is a rather random collection of recent as well as commemorative patches. In the same episode, we can see three showcases with 20th century NASA and international mission emblems.

Mission patches in the 602 Club from ENT: "First Flight"

Identification of the patches in the 602 Club

In the same episode, a somewhat different set of patches can be seen on the rear wall of the NX Project control room. #5 and #9 are new. We can recognize:

Some of these wall emblems are commemorative, whereas some others seem to represent current institutions and programs. "Space Systems - Cargo Service" might be a company, rather than a Starfleet branch.

Mission patches in the control room, left side, in ENT: "First Flight"

Mission patches in the control room, right side, in ENT: "First Flight"

Identification of the patches in the control room

The SS Conestoga from ENT: "Terra Nova" is not from the 22nd century, but its emblem completes the list of space-related logos that appeared in Star Trek Enterprise. The emblem is placed on the hull of the CG model of the ship, which in the episode itself unfortunately only appears on a small monitor segment. 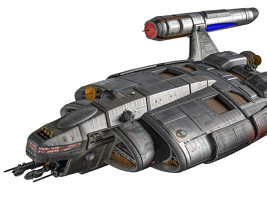