Many sets in Star Trek, including a couple of permanent ones, include wall, floor or ceiling elements with what looks like a metallic grating. They are often illuminated from behind if they appear on a wall or ceiling. As we look further, we can spot smaller pieces of the same lattice structure in several more places, and even as furniture.

In real life, the lattice structures are available as freezer spacers for use in cold storage rooms.

Freezer spacers are comparable to pallets, but are just designed for storage, not for transportation. They are used in walk-in freezers to allow air flow between the perishable goods and hence improve the cooling effect. They are available in various shapes. This article focuses on the "square lattice" type as it frequently appears on Star Trek, rather than on "egg cup" or other variations.

Square lattice freezer spacers are stackable/nestable and reversible (it doesn't matter which side is up). The standard size (in the U.S.) is 40"x48". They are always made of plastic, usually polyethylene (PE), weighing about 16 lbs.

To make them stackable and reversible, the spacers are designed with alternating upper and lower levels in one direction. The basic upper or lower grating level spans two squares in the narrow direction. Interestingly, the lattice is reinforced with filled spaces in what almost looks like random intervals.

Freezer spacers didn't show up as decoration on Star Trek prior to 1986. The first one we could find was in "Star Trek: The Voyage Home", aboard the Klingon Bird-of-Prey, here not yet as an integral part of the set.

On TNG, we can see freezer spacer walls as soon as in the pilot episode "Encounter at Farpoint", in the transporter room where they would remain until the end of the series. They also appear, in larger numbers, in Q's courtroom in the same episode. While the panels were sawn up for the transporter room, the courtroom uses the complete size of 40"x48", and the whole wall is correspondingly partitioned.

The freezer spacer walls of TNG are often illuminated, and they arguably look a lot more impressive that way. Sometimes larger parts of the wall or complete sets with the spacers are reused. The Edo wall in TNG: "Justice", for example, is the same that already appeared in Q's courtroom, only with the horizontal ledgers covered in flowers. The courtroom was reconstructed for TNG: "All Good Things", including one of the wall segments, although the set now looks somewhat different. In another clear re-use, the tunnels on Mordan IV from "Too Short a Season" return on Omicron Theta in "Datalore". Once again, we can see on the latter set that one ceiling segment corresponds to exactly one 40"x48" spacer element. 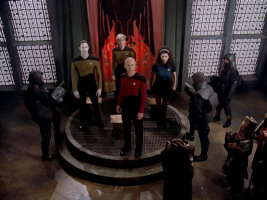 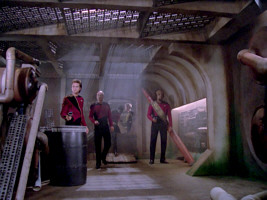 Moran IV tunnel ceiling in TNG: "Too Short a Season" 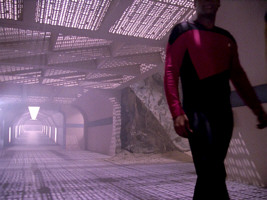 Another notable set built with freezer spacers is the Enterprise-D computer access room, although it appears in this form only twice, in "Evolution" and "The Bonding". In the HD close shots of the wall, and especially of the unlit portions, we can recognize the rather coarse finish of the panels. 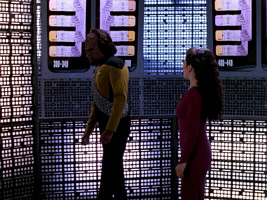 Duck blind wall in TNG: "Who Watches the Watchers" 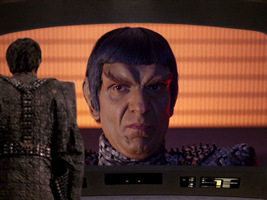 Romulan science vessel wall in TNG: "The Next Phase"

Sometimes only small pieces of freezer spacers are used as wall parts. The Klingons seem to be fond of such a kind of decoration. We can see it on the Pagh in TNG: "A Matter of Honor", in the Rite of Ascension chamber in TNG: "The Icarus Factor" and in Vagh's office in TNG: "The Mind's Eye".

Rite of Ascension chamber wall in TNG: "The Icarus Factor" 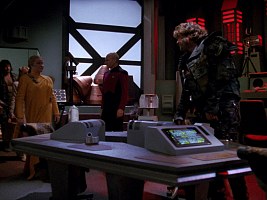 The perhaps most obvious way to use freezer spacers as set decoration is on the floor where they can simply be put down. Floors made of such plates are visible on various occasions, such as in the access tunnel in TNG: "11001001" and on the Batris in "Heart of Glory". On these two occasions, it is particularly easy to distinguish single spacers. In "The Neutral Zone", we can additionally see a ceiling built from spacers.

Rite of Ascension chamber floor in TNG: "The Icarus Factor"

The floor of the Enterprise-D Jefferies tubes too is made of this material, but only in the fourth and the fifth seasons. We can see in "Power Play" how a segment of the floor plating is removed, revealing the profile of the freezer spacer. After the fifth season, the floor of the Jefferies was covered with panels with a characteristic 7x7 "egg cup" pattern. The new material was a heavy duty rubber mat called "2520 VIP deluxe" by Cactus Mat. We can still see the square lattice panels in TNG: "Lessons" but only as a painted backdrop, whereas the actual Jefferies tubes filmed for the episode already have the "egg cup" pattern. The latter pattern remained the same in Defiant and Voyager Jefferies tubes. We can imagine that the change was supposed to ease the strain on the actors' knees when crawling through the tubes.

In consideration of the coarse finish, it is curious that spacers were sawn apart and single two squares wide segments were used to build decorative columns and table bases for Enterprise-D crew quarters and other sets. We can see them in different variations: a column for a statue or a table top in Picard's quarters (TNG: "Angel One") and other crew quarters (TNG: "Symbiosis"), flimsy table supports (TNG: "Coming of Age" and "Heart of Glory"), a wide table base in Stubbs's quarters (TNG: "Evolution") and later underneath Picard's table (TNG: "Attached"), two narrow table bases in the Enterprise-A sickbay ("Star Trek V") and in Geordi's quarters (TNG: "Galaxy's Child") and diagonal table legs aboard Baran's ship (TNG: "Gambit II"). Also, Data's desk was supported by freezer spacers for the whole run of TNG.

In a similar fashion as with the furniture, freezer spacers were incorporated into a bridge console of the USS Hathaway in "Peak Performance", to make it look "obsolete".

It seems curious that we hardly see any spacers on Star Trek without them being an integral part of a ceiling, wall or floor. Among the rare occasions where spacers can be spotted leaning on the wall are "The Vengeance Factor" and "The High Ground".

Regarding the practicability of the freezer spacers for set decoration, they can be simply laid out on the floor and, with a fitting frame, on the ceiling and the walls as well. The panels are clearly lightweight compared to a metal grating of the same size, but at some 7 kilograms per piece it is necessary to hold wall elements in place with more than just duct tape, probably by just screwing them on. This may also have been the method to build columns or table bases from four spacer segments, considering that PE is notoriously ungluable. We also assume that the paint coating applied to these columns was not really durable.

In DS9, the freezer spacers are used for the ceilings of the crew quarters and other rooms. The illuminated lattice contributes to the typical lighting effects of DS9 with accentuated shadows. Other than that, they don't show up frequently on this show. DS9 used to have an Art Department separate from the one of TNG, and most of the inventory of TNG was transferred to Voyager after the end of the series.

DS9 crew quarters ceiling in DS9: "If Wishes Were Horses"

DS9 wardroom ceiling in DS9: "Tacking Into the Wind"

Freezer spacers appear more frequently on Voyager than they did on DS9, albeit not quite as often as on TNG. In seasons 1 and 2 of the show, in particular the Vidiians and the Kazon appear to be very fond of this style.

There are several more Voyager episodes with freezer spacers, always as walls or ceilings. The odd furniture using the spacers seems to have been retired.

Krenim temporal ship ceiling in VOY: "Year of Hell I"

Freezer spacers can be seen many times still on Star Trek Enterprise. They are often used as not-so-decorative walls without illumination.

Table base on Pernaia Prime's moon in ENT: "The Seventh"

The typical ceiling grating in rooms on Deep Space 9 such as the wardroom also appears in the Lower Decks episode "Hear All, Trust Nothing".

Deep Space 9 ceiling in LOW: "Hear All, Trust Nothing"

Deep Space 9 ceiling in LOW: "Hear All, Trust Nothing"

Thanks to Twitter user @stephen_duignan for some appearances in ENT. Some episode screen caps from TrekCore. The heavy duty rubber mat was identified by Fleet Workshop Forum. Product images from Polymer Solutions International and from Orbis shown in accordance with Fair Use exemption.