Every Star Trek production requires a large number of props to act as technical devices of Starfleet or of aliens. There are custom prop designs for standard phasers, tricorders or communicators. But in most cases there is a need for additional props that either serve a specific purpose in the story or are used as generic futuristic decoration. Several of the props that could be seen are actually slightly modified devices of the 20th/21st century. In particular, game consoles have been used repeatedly for handheld scanners.

In Picard's Nexus vision, Matthew's Christmas gift is actually a Space Marines EVAC Fighter from the "Aliens" action figure line by Kenner (1992). It features firing "Alienator missiles" and a transparent "Alien capture pod" at its aft end. Nothing has been done to disguise the toy's true origin or to make it look like a Trek vessel. 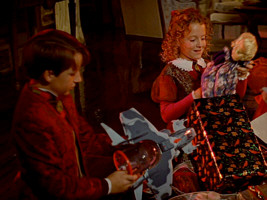 The Robotech Invid Shock Trooper was turned into Quark's pistol in two DS9 episodes and even appeared in ENT: "Acquisition" (though we should expect Ferengi technology to progress in 220 years). One shoulder cannon of the toy was made into the barrel, a leg became the handle of the Trek weapon. A variant of the prop only uses the cannon, without the disk-shaped handle.

Variant of the prop
(icollector.com)

The weapon that appeared in many Star Trek episodes and most notably as the Jem'Hadar rifle was originally a Remco crossbow toy, produced in apparently several different colors around 1990. The first version of the weapon in Star Trek (as a Hunter weapon in DS9: "Captive Pursuit") still had the bow part in the form of two spikes on the barrel. This part was largely removed on later versions of the weapon. 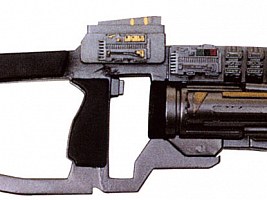 The game console Astro Thunder from Tandy (1986) appears as a comm console in TNG: "Encounter at Farpoint". The same prop appears once again several years later, this time as a door control console on the "Polaric Power Planet" in VOY: "Time and Again".

The device that Lt. Ducane uses to hide Seven's implant in VOY: "Relativity" was made from a baby-themed Tamagotchi "Diaper Dancer" by C Games & Trendmasters.

We can see an Excalibur Space Invaders console as a scanner in ENT: "Vox Sola".

The Hasbro Music Activated Game System (MAGS) appears in two episodes: as the Vulcan bomb in ENT: "The Forge" and as a medical scanner in ENT: "Terra Prime", both times with additional LEDs.

Vulcan bomb in ENT: "The Forge"

A 380-year-old game pyramid manufactured by Bandai frequently shows up in Ten Forward, like in "The Outrageous Okona" and "Ensign Ro". In TNG: "Ethics" we can see how Alexander Rozhenko plays with it, insinuating that in his time the pyramid still serves the same purpose as in the 20th century.

On the bridge of the USS Shenzhou, the pilot stick as well as the thrust controls are taken from a Logitech G Saitek X52 that was only slightly adapted for this purpose.

23rd century electronic (or rather duotronic) circuits in TOS often look quite familiar because they consist of printed circuit boards or test boards along with discrete components like transistors, resistors and capacitors as they existed in the late 1960s.

Other Starfleet circuitry in TOS

Revised Norman in TOS-R: "I, Mudd"

For the remastered version TOS-R: "I, Mudd" the effect of opening Norman's stomach lid as well as the circuitry were revised to look futuristic.

In "Star Trek: The Undiscovered Country" we can glimpse pencil markings on the inside of an access panel. Also, the technology inside looks like directly taken from late 20th century computers.

Behind the panel in "Star Trek VI"

We know that the Pakled steal equipment from various civilizations and that they do not really know how to get everything working. Maybe it is the simplicity of the device that makes a switchboard or a radio beacon (EPIRB) from Earth's mid-20th century useful to them. As already mentioned, Alexander likes to play with a 380-year-old game pyramid. He seems to have an odd predilection for Earth's late 20th century, considering that in TNG: "A Fistful of Datas" we can see him with the front covers of 5.25-inch floppy drives. The Borg, however, are fans of this ancient technology as well.

Alexander and his floppy disk drives in TNG: "A Fistful of Datas"

In TNG: "Peak Performance" we can see an access panel made of a 20th century QWERTY keyboard that is mounted upright. 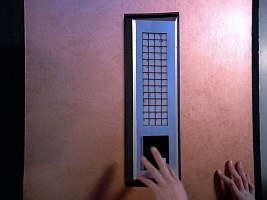 In ENT: "Stigma" we can see a Vulcan scanner prop which really is a present-day (flatbed) scanner. Someone said they are very advanced?

The base of the Voyager standard desktop monitor was built from an APC POW6 desktop power manager, "the ultimate in power control and cord management plus guaranteed surge suppression for life".

The Aenar appear to be fond of clear plastic devices. One of them is a Harman Kardon Soundsticks subwoofer. They probably love to rock their underground city at times.

Aenar device in ENT: "The Aenar"

The Andorian communicator that Shran uses in ENT: "Proving Ground" and Ambassador Thoris in ENT: "Terra Prime" was built from an Olympia SB002 SoundBug Portable Sound System, a small loudspeaker that could be attacked to a flat resonant surface.

Jörg said he'd be damned if the stasis container for Odo seen in DS9: "Children of Time" didn't begin its life as a bread machine. After a bit of Googling I could finally confirm that. I only hope that they didn't heat it up while Odo was inside. ;-)

The Klingon leader in ENT: "Marauders" carries binoculars made from an old Soviet night vision device (PNV-57E), repainted and with the helmet mount and battery pack removed.

Here are just three examples of the many commercially available lamps that appeared in Star Trek. The probably most notable lamp types consist of small white tubes and were designed by the Canadian company Rougier around 1970. There are four variations with different shapes.

The lamp "Jazz", designed by Porsche for Italiana Luce in 1989, is the probably most common desktop lamp of the galaxy and can be seen at least seven times in Star Trek.

A third interesting lamp, the PS 2014 as it appeared on Star Trek: Picard, is available at IKEA. 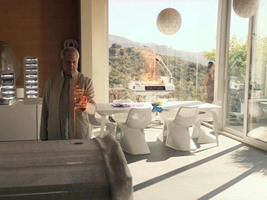 In the sickbay of the alternate universe Enterprise we can see hand dryers of the real-world type Airblade by Dyson (which by the 23rd century may not be so annoyingly noisy any more).

In the Regula I station in "Star Trek II: The Wrath of Khan" as well as in the sickbay of the USS Enterprise NCC-1701-D we can see a tool cart with three levels and three casters that is a redecorated Boby taboret, originally designed by Joe Colombo. It appears in other sci-fi as well, such as in Space: 1999 and in "Oblivion". 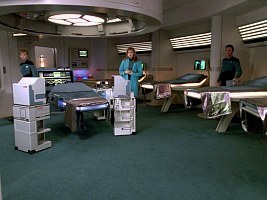 The Boby taboret even shows up in the sickbay of the USS Discovery.

In ENT: "Acquisition", we can see an Earth tool cart, complete with Starfleet labels. The Ferengi bring their own tool cart, which is the same prop, only painted green. The cart is commercially available as "Bin Utility Cart".

In TNG: "The Big Goodbye", we can see a crew member walking by with a white case. Only the HD version allows to identify it as a Fisher Price Construx box, as indicated by the embossed letters on the side. 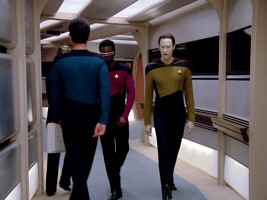 Box in TNG: "The Big Goodbye" Similarly, the phaser locker in DS9: "Hard Time" tries hard to conceal its banal origin in the 20th century, as "Action Packer" box by Rubbermaid (look at the reversed letters in the lid).

The EPS regulators on DS9 appear in more than ten other episodes, most often as freight containers. It is actually a composter named "Bio Orb".

EPS regulator in DS9: "In the Cards"

Some containers, and the origin of the prop

The self-replicating mine from DS9: "A Call to Arms" shows up in at least six more episodes, each time as cargo containers. This prop too is actually a composter.

Cylinders with an octagonal cross-section could be seem in many episodes of Star Trek, most notably as Starfleet sample containers and transporter test cylinders. Overall, these devices appeared in at least 40 episodes or movies! The prop was made from containers for sonobuoys of the U.S. Navy. A separate article shows all appearances of these containers: Re-Uses of Sonobuoy Containers.

Test cylinder in TNG: "The Ensigns of Command"

We can see the same type of a small spherical container in very different times, locations and functions. In real life this device is called a LOX (liquid oxygen) bottle or LOX converter, as it is used especially in older military aircraft.

Various containers that are used in the pharmaceutical industry appear in Star Trek episodes, especially in the cargo bay of the Enterprise-D. The yellow "overpack" has a screw top and is used to store spill containment supplies. There are also two kinds of blue plastic drums, one with a black top and one with two bungs on the top. A smaller 15 gal gray plastic drum can be seen as well.

The "punishment box" in DS9: "Paradise" is actually a bulk box that can be used to store various equipment, or as a waste paper container. Very similar boxes are used on farms as seed containers. It seems that a bottom part was flipped and used instead of a regular lid. The box was most likely dark gray and was painted silver for the episode.

Art coordinator Penny Juday mentioned in an interview that the tubes the Borg install on the Enterprise-E deflector dish in "Star Trek: First Contact" were built from bird feeders. The tubes reappear as Vaadwaur devices in VOY: "Dragon's Teeth" and on Voyager in VOY: "Nightingale".

A device that can be seen on Picard's desk in TNG: "Coming of Age" is a 20th century desoldering pump. Propworx calls the prop a "medical injector". 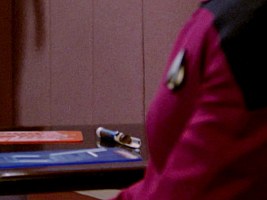 Device on Picard's desk in TNG: "Coming of Age" 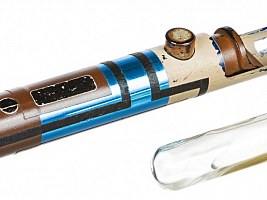 The dermal regenerator in VOY: "Revulsion" must be handled with special care, otherwise it could accomplish just the opposite of a healing effect. The prop is almost definitely a twin-bladed asparagus peeler.

The strap used to constrain Voq-Tyler's head during the surgical procedure in DIS: "Vaulting Ambition" is a real-life product. It complies with European standards, as indicated by the CE (Conformité Européene) sign. Some screen caps from TrekCore and Trekmovie.com. The Dyson Airblade was discovered by Marçal, the subwoofer by Twitter user @MissHrisoula, the Soundbug and the "Diaper Dancer" by AJ Halliwell, the Logitech Saitek flight controller by Marcus G. Kulp, the crossbow by Nathan Prosper, the Boby taboret by Craig R, the sonobuoy by Josh Wilder, the power manager by Mo (see also Trekprops.de), the binoculars by Alexej Segeda, the Construx box by Twitter user @mrtwirth and the various plastic drums by Steve Aichele. Thanks to satre and Lee for their contributions!