Cylinders with an octagonal cross-section could be seem in many episodes of Star Trek, most notably as Starfleet sample containers and transporter test cylinders. Overall, these devices appeared in at least 40 episodes or movies!

In real life, the props started their life as containers for sonobuoys of the U.S. Navy. They are apparently available as military surplus in large numbers and at low costs and can be seen in other science fiction series as well, such as Buck Rogers or the original Battlestar Galactica.

Sonobuoys are expendable systems that are used by the U.S. Navy and by other navies for anti-submarine warfare or underwater acoustic research. The buoys are dropped from an aircraft. While the radio transmitter remains afloat, the casing of the buoy with the hydrophone (a microphone designed to work underwater) sinks to a preselected depth. There are active sonobuoys that record the reflection of a ping, and passive devices that just listen.

The container we can see in Star Trek is the transport container used for AN/SSQ-47B sonobuoys (not the casing of the buoy itself). The octagonal shape is supposed to facilitate stacking of the containers.

The first four Star Trek films abound with appearances of the sonobuoy container. It appears in more than a dozen different locations and with very different purposes.

The first time we can see the sonobuoy containers in Star Trek is in "Star Trek: The Motion Picture". Here, they show up a couple of times as cylinders without a specific purpose, in a gray and a white variation. Another one, painted in high-gloss silver, serves as an apparatus in sickbay. The four round structures in the wall behind Decker are quite possibly made from sonobuoy containers too. Finally, we can see irregularly structured panels in the area where "V'ger" resides. These panels will reappear in the next three movies and on TNG, and some of them include an embedded sonobuoy container that was probably cut in half for that purpose. In "Star Trek: The Wrath of Khan", the props appear in many different places. They are used as containers on the Regula planetoid. We can also see them embedded in the aforementioned wall segment, both in the simulator room and on the Regula station. Finally, we can recognize them as the supports in a ladderway on the Enterprise. They can be seen as Spock climbs down to repair the warp drive at the end of the Battle in the Mutara Nebula.

Container in "Star Trek I"

Container in "Star Trek I"

Sickbay device in "Star Trek I"

Wall panel in "Star Trek I"

In "Star Trek: The Search for Spock", sonobuoy containers can be seen as a device embedded in three walls: in main engineering on the Enterprise, in Uhura's transporter station and on the Bird-of-Prey. Furthermore, it serves as some hydraulic or pneumatic component on the side of the loading ramp of the Klingon ship. In "Star Trek IV", the prop is embedded into the wall of the bridge of the "HMS Bounty".

The first time the containers appear in TNG is in "Encounter at Farpoint". We can see them through an open door when Data gives Admiral McCoy a tour of the Enterprise. They can also be glimpsed in sickbay, complete with a frame that allows to carry two of them. The containers are embedded into a wall in TNG: "Hide and Q", as part of the same wall element that appeared in the first four TOS movies. Other TNG episodes that show this wall are "Too Short a Season" (on Mordan IV), "A Matter of Honor" (on the Klingon Bird-of-Prey), "The High Ground" (in the terrorist camp on Rutia IV) and "Liaisons" (inside the wreck of the freighter). One of the arguably most notable appearances, however, is in TNG: "Symbiosis". Here, the containers are used to store the drug felicium. After that, the containers are seen three times as transporter test cylinders, in TNG: "The Ensigns of Command", "Hollow Pursuits" and "Data's Day". We can see them as generic Starfleet sample containers again in TNG: "Hero Worship" and "The Masterpiece Society". In "Chain of Command II", finally, they act as antimatter mines.

Containers in TNG: "Encounter at Farpoint"

Containers in TNG: "Encounter at Farpoint" 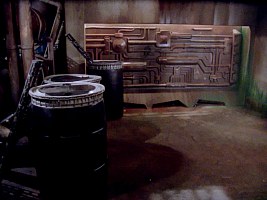 Wall greeble in TNG: "Too Short a Season" 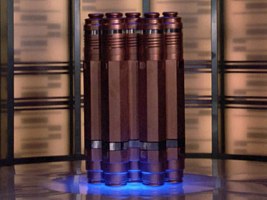 Wall greeble in TNG: "A Matter of Honor"

Test cylinder in TNG: "The Ensigns of Command" 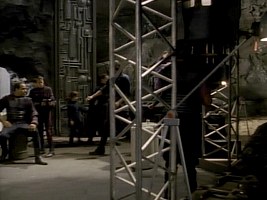 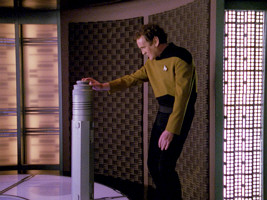 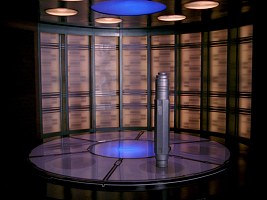 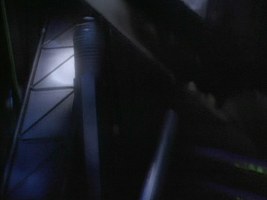 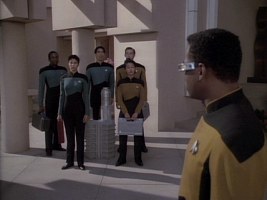 Container in TNG: "The Masterpiece Society" 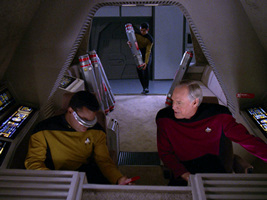 Antimatter mine in TNG: "Chain of Command II"

We can also see the sonobuoy containers aboard the Amargosa station in "Star Trek Generations", here as some sort of torpedo or probe.

In DS9, the sonobuoy container predominantly appears as a container of Cardassian origin, and is painted copper on these occasions. Only in some early episodes we can still see the silver Starfleet sample containers with red labels. The containers are usually just decoration, often a single one of them is carried by a random background performer. In later DS9 seasons we can occasionally see multiple containers stacked in a cargo bay or weapons storage.

Starfleet container in DS9: "The Nagus"

Cardassian container in DS9: "The Maquis I"

Cardassian containers in DS9: "The Assignment"

Cardassian containers in DS9: "Empok Nor"

Cardassian containers in DS9: "Who Mourns for Morn?"

In VOY: "Rise", the containers show up on two different occasions: on the Etanian starship (once again as part of the familiar wall element) and as wall-mounted tanks in the orbital tether cabin. In VOY: "Revulsion", the cylinders can be seen in various places all over the Serosian ship. Finally, the sonobuoys appear in the armory of Enterprise NX-01 since the first season, in at least six episodes.

Containers in ENT: "Fight or Flight"

Containers in ENT: "The Crossing"

Containers in ENT: "The Xindi"

Appearances in Other Science Fiction Series

Buck Rogers in the 25th Century

The containers can be seen in two Buck Rogers episodes, "Shgoratchx!" and "The Hand of Goral" (both season 2). The props come in different colors. Many are equipped with lighting.

Light column in Buck Rogers: "The Hand of Goral"

Light columns in Buck Rogers: "The Hand of Goral"

We can see the containers in the episodes "The Living Legend II", "Fire in Space" and "Take the Celestra" of the original Battlestar Galactica series (1978).

The phaser couplings in DS9: "Behind the Lines" look similar as the sonobuoy casings but are smaller. It remains to be see what kind of real-life containers they were made from and if the reappear on Star Trek.

Phaser couplings in DS9: "Behind the Lines"

Thanks to Tom for spotting some appearances of the sonobuoys, to Mo for the hint about the phaser couplings and to Neil Fraser for further annotations.