Redresses of the Karemma Ship

The Karemma ship prominently appeared in DS9: "Starship Down", where the Defiant defended it against two Jem'Hadar fighters. But this was the last time the physical model was on screen. After that, we could see a CG model of the vessel a couple more times, usually as ships of other species.

In DS9: "Starship Down", the Karemma ship appeared both as a physical miniature and as a CGI. The miniature was used for the close-ups, whereas the CGI is visible in the scenes when the vessel enters the atmosphere of the gas giant. The latter was created by the company Vision Art. It can only be seen from a distance, and it is not really possible to tell how well the two different incarnations correspond, which were likely created at the same time for this very episode. In later episodes we can see a new CG model, initially created by Digital Muse for DS9: "Shadows and Symbols", whose structure and proportions are different than on the original Karemma ship.

The Karemma vessel has a blue engine glow in the middle of the nacelle, in an opening at the aft end of its solid part. It looks like the CG model is overall better illuminated than the miniature, but this may also have to do with the fact that we see the latter only with deactivated engines.

We can see a new CG model of the Karemma vessel in DS9: "Shadows and Symbols", which was obviously rebuilt from scratch. It overall follows the lines of the original version but includes several purposeful modifications. The original Karemma ship already had two bumps at the lower port and starboard bow, which were extended to some kind of wings on the Bajoran CG model. On the screen cap from "Shadows and Symbols" it looks like there are two wings, sloping down at an angle of roughly 45°. The later episodes, however, and ultimately the orthographic depictions of the CG model in Star Trek: The Magazine (there mistakenly labeled as "Karemma ship") show that there are in fact three wings: two horizontal, and one vertical on the ventral side of the bow. The Karemma ship definitely didn't have these wings, so this is an error in the magazine.

As already mentioned, the characteristic fork on the Karemma ship was removed in favor of a blunt and overall shorter front section. The rest of the main body is very similar on the Bajoran CGI, only a bit elongated. One more significant difference is that the nacelles were moved forward. While two thirds of the nacelles protrude from the pylons to the aft end on the Karemma vessel, it is the other way round on the Bajoran version. The shape of the nacelles was modified too. We can't make out an engine illumination on the Bajoran vessel, perhaps just owing to the limited resolution.

Several previously seen Bajoran ship models were turned into CGI versions for "Shadows and Symbols". We can only speculate why the Karemma design was recycled in this fashion too, considering that the Karemma are a Gamma Quadrant civilization. Perhaps the vessel was left behind by the Karemma? Or did the Karemma provide the Bajorans with plans for their vessel? In this case the vessel would be quite new at the time of the episode. Yet, in "Shadows and Symbols" Cretak says to Kira: "Colonel, do you seriously believe that your antiquated collection of impulse ships stand a chance against our Warbirds?" She may not count in the (new) vessel of Karemma origin though when uttering a threat. Anyway, the model includes a couple of modifications that may be sufficient to insinuate that it is a different, perhaps genuinely Bajoran ship class.

In VOY: "Drive", we can see the CG model in the hands of the "Antarians" in the Delta Quadrant. There are two ships of this type, one on either side of the start line-up. The effects in this episode were done by Foundation Imaging, but there don't seem to be any modifications to the existing model since "Shadows and Symbols". We can see the illuminated window rows, as they already existed on the physical Karemma miniature. These were not recognizable on the Bajoran version, either because they had not yet been incorporated (the Bajoran ship may be supposed to be considerably smaller), or because the ship was too far away. The Antarian vessel looks almost uniformly gray, but in hindsight the same may apply to the Bajoran ship. The Antarian ship has lighted window rows also in the aft section.

The opening in the nacelle that used to glow blue on the Karemma vessel appears to have a yellow stripe pattern on the Antarian version. We can only see the port side in a close view, with a red position light, but the depiction of the CG model from Star Trek: The Magazine reveals that the light on the starboard side is green. It is amazing how readily aliens comply with human/Federation standards, even on the other side of the galaxy!

The next appearance of the CG model is in VOY: "Natural Law", here barely recognizable as it almost seems to be a part of the Ledosian space station (we can spot it in the center of the left screen shot). Some kind of brownish "scaffolding" was added to the ship, and its overall color was switched to rusty brown through what looks like a completely new skin. The vertical fin, which looked very clumsy on the CGI version so far, was shortened, but there are now two of them. The warp engines were scaled down, and the semi-circular portion of the "wings" was removed. On the Ledosian ship the engine glow inside the warp nacelle is yellowish, just as the very aft end of the nacelle, as we can see when the Delta Flyer passes by the ventral side of the ship. It does not seem to have changed since the appearance in "Drive". 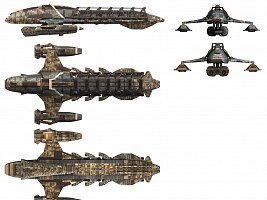 We can see the CG model one last time at Xantoras in ENT: "The Breach", as one of three visitor ships that has to leave the planet, the other two being another re-use of Qatai's vessel (left) and the ubiquitous hammerhead" freighter" (right). The originally Karemman model (top) was apparently not modified in any fashion for this appearance, it is the same that already appeared in DS9: "Shadows and Symbols" and "VOY: "Drive". 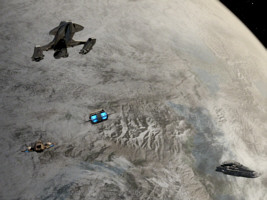 John Eaves sketched up the Karemma ship for the modelers, as depicted in the magazine for the Karemma model of the Eaglemoss Official Star Trek Starships Collection. We can see that his original design already includes the forked bow. There are several slight differences to the final model, such as the shape of the nacelles, which turned out more angular than on the sketch.

The available photos of the studio miniature clearly show that the Karemma vessel did have a forked bow, which was not incorporated into the later CG model for ships of other species. The newer CG model, on the other hand, includes a vertical fin pointing downward on the bow that was not on the physical model. Furthermore, the proportions of the two models are different. Most obviously, the nacelles of the CG model are relatively larger and further forward and the main hull is elongated. 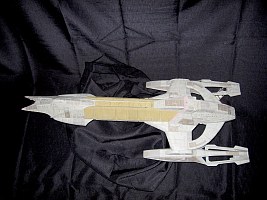 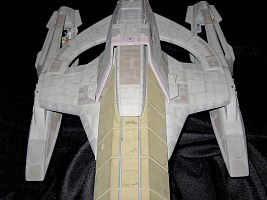 As already mentioned, in publications the later CG model is routinely passed as being the same design as the miniature. The Star Trek: The Magazine as well as the Star Trek Fact Files include oblique views of the Bajoran version labeled as "Karemma ship". Even the Official Starships Collection ignores the differences and does not get the look of the Karemma ship right. 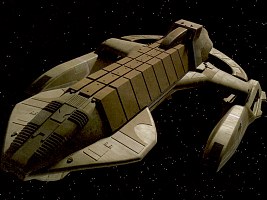 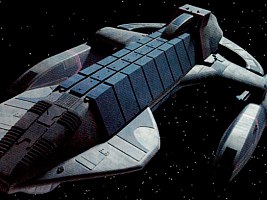 Unlike the CG renderings, the orthographic views of the Karemma vessel from the Star Trek Encyclopedia II, from Star Trek: The Magazine and from the Star Trek Fact Files attempt to reproduce the model in its original configuration. But they differ in many details. Overall, only the Fact Files drawing shows the structure of the vessel correctly, including the nine cargo compartments in the middle of the ship, the shape of the bow section with its forked tip, the pod on the aft underside, and small details such as the color areas on the front tip and on the "rollbar" at the aft end. The side view in Star Trek: The Magazine looks mostly correct, but there is no forked bow in the corresponding top view. 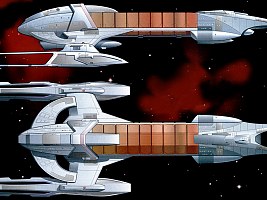 The Karemma ship in LOW: "Hear All, Trust Nothing" is a bit like a hybrid between the CG knock-off and the actual Karemma design seen in DS9: "Starship Down". The overall proportions, the engine placement and the blue engine color resemble the latter, whereas the brown color and the three wings instead of the forked bow, as well as engine details, are almost exactly as on the former. The wider "rollbar" with two small wings, on the other hand, and the apparent cockpit window are like on none of the previous two design variations. It is possible that whoever drew the ship had the inaccurate Eaglemoss model as a reference but was aware of the look of the authentic Karemma ship as well.

Thanks to Doug Drexler for the picture of the Ledosian variant.