Artificially generated by aliens. Solvent that is able to dissolve Starfleet uniforms, but not bioplastic coatings such as Data's skin.

Fluidic space in VOY: "Scorpion II"
Naturally occurring. A parallel space near our own composed entirely of a biological fluid.

Genesis explosion in "Star Trek: The Wrath of Khan"
Artificially generated by crew. An energy wave that has the effect of rapidly terraforming planets and nebular matter.

Naturally occurring. Lethal, emitted by a geodesic fold, Starfleet shields are usually not able to protect a ship's crew against this radiation. "Geodesic" is a strange term to describe radiation or even the related fold-phenomenon. Strangely enough, this radiation(!) is one of those for which we have a miraculous inoculation. 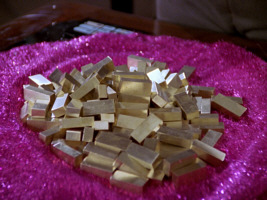 Submitted by B. and Rebecca

Artificially generated by crew. A particle that has something to do with gravity, but also with other strange effects. A real particle according to modern physics, whose existence is proven indirectly. Gravitons are the particle manifestation of gravity. 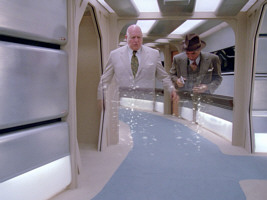 Holomatter vanishing in TNG: "The Big Goodbye"
Artificially generated by crew. A simulation of matter using forcefields and holo-imaging technology within a chamber known as a holodeck. Under certain circumstances, holomatter can take on all the recognized features of lifeforms; however, all holomatter disintegrates when removed from the holodeck.

Naturally occurring. Particle that may interfere with transporter systems. Hyperons are a class of real particles whose name dates back to the days before quark structure was well known. Leptons (electrons, muons, tau and their associated neutrinos) are "light", mesons are "medium", and baryons are heavy. When more massive short-lived particles heavier than the proton were produced, they were called hyperons. Some examples are the sigma lambda and cascade. After quark structure was understood, the first three names were kept, but the meaning was changed. Leptons are the same list as originally, but are understood to be fundamental particles with no quark structure. Mesons are quark-antiquark pairs. Baryons are triplets of quarks. The term hyperon is still used, but not so frequently.

Naturally occurring. A by-product of the geological decay of dilithium. The number 629 would usually denote the relative atomic mass (the number of nucleons) of an isotope if illium were a real-world element. The highest known atomic mass to date is around 270. Since VOY: "Emanations" states that there are over 200 elements known in the 24th century, the number 629 becomes half-way consistent again. Only that none of the huge atoms can be supposed to be stable and naturally occurring. I assume that it's actually a compound.

Submitted by Fidel Melgoza and Thomas

Inversion nebula in VOY: "Alter Ego"
Naturally occurring. A nebula composed of plasma strings that is apparently beautiful to look at. Nebulae of this kind do not exist in the Alpha Quadrant. They are apparently relatively unstable, requiring an outside influence to stay stable.

Naturally occurring. Used in ion drive propulsion. An atom or group of atoms that carries a positive or negative electric charge.

Artificially generated by crew. Energy pulse that may be created with the deflector dish. Presumably just a bunch of charged atoms (ions).

Artificially generated by crew. Has characteristic "magnetic flux density". These sound like "ion-forming" particles. Not really a precise name.

Naturally occurring. A neurotransmitter in Trills which maintains the link between symbiont and host.

Isolynium in DIS: "All In"

Artificially generated by crew. A sedative.

Artificially generated by aliens. Substance used by the Xindi. Could this be the same as kemacite?

Jem'Hadar demand their Ketracel white in DS9: "To the Death"
Artificially generated by aliens. A vital, isogenic enzyme needed for the survival of the Jem'Hadar. The enzyme can only be provided by the Founders, and currently cannot be reproduced by the Federation. The Founders engineered the Jem'Hadar's addiction to this enzyme to ensure their loyalty to the Dominion.